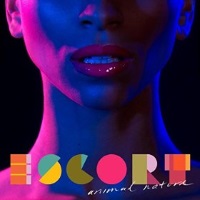 Click on CD cover
to listen or purchase
https://www.amazon.com/Animal-Nature-Escort/dp/B015KAO1A4/ref=as_sl_pc_tf_til?tag=soultracks-20&linkCode=w00&linkId=34F4B22AZZGARJYZ&creativeASIN=B015KAO1A4

It’s not exactly rocket science, describing Escort’s fun sound. The ten-plus member New York band, fronted by musicians Dan Balis, Eugene Cho, and Adeline Michele came out of the gate in 2012 with their self-titled indie-released LP using a euphoric throwback formula that blended ‘80s synths with a cloudburst of classic disco. The entire disc was simply genius, receiving oratorical praise from a flurry of music critics. Simply put, it was one of the greatest dance records not recorded during disco’s golden zenith. Unfortunately, the project escaped the radar of SoulTracks.com when it first dropped, an error not repeated for their more uneven sophomore effort.

Unlike some dance outfits, this retro group is unoffended by the disco label. In fact, in interviews, they wear it proudly. The music isn’t ashamed either. Michele, at times breathy like Janet and in other cases confident like Jody Watley, struts her pipes with Donna Summer sass while the band takes on retro grooves culled from People’s Choice and Chic. Thanks to Daft Punk’s Grammy-award winning Random Access Memories opening up the floodgates to organic disco, the boogie pride and this 21st century disco revivalism now has a global spotlight that’s only getting brighter. Escort benefits from this timing.

These days Escort can be found on the road, premiering their music as the opening act for CeeLo Green on his Love Train tour. Accordingly, part of their set list is comprised of tracks from their sophomore LP, Animal Nature. This 10-track collection (19 in the “Deluxe Edition”) explores a succession of newer rifts, ‘80s pings and galactic tribal funk, putting some pause on their previous back-to-basics disco work ethic.

In places, these adventurous ambitions pay off. “If You Say So” breathes like crystalized Madonna and catchy R&B; kudos to its wondrous synths, charming melody, and feel good rhythm. “My Life,” the lone return to Escort, is just as tantalizing. With its Chic-esque funk and sing-a-long chorus, they pull off a disco-pop gem worth repeating like a KC & the Sunshine Band standard. “Barbarians,” forcing Blondie funk upon a slick stadium chant (“Stand up, stand up/Bang your drums/We are the barbarians”), comes in a distant third-place. “Body Talk,” the album opener, could’ve easily been a runaway hit. It plays with glamorous Eurodisco sophistication, but some of its luster dwindles after the verse and chorus are heard.

In other places the act’s explorations beam hard on Cerrone and Giorgio Moroder electro workouts but somehow gets lost in space. The productions on “Cabaret” and St. Vincent’s “Actor Out of Work” seem too robotic, losing some of its steam midway into both tracks. Thanks to a pitch-perfect live cover of Gino Soccio’s “Dancer” at the 2012 Montreal International Jazz Festival, some of the cool nu-school mixes (“Barbarians”) and a buoyant dub of “Body Talk,” Escort redeems themselves from their airborne spotty experiments. Still, flaws and all, Animal Nature is a stylish and exuberant trip into Cho and Balis’s imagination and gives Michele more ambiences to soar as a disco vixen for a post-Summer generation. Recommended.