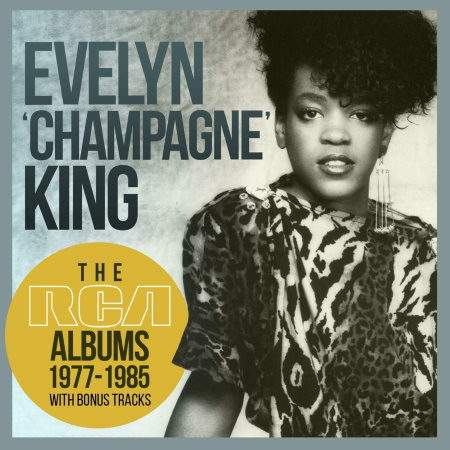 Evelyn “Champagne” King’s importance in the world of ‘70s and ‘80s soul music is often underrated. While her name most commonly sparks conversation of the impactful disco classics “Shame” and “I Don’t Know If It’s Right”—in addition to seminal, Kashif-assisted synth-R&B gems “I’m in Love,” “Love Come Down,” and “Betcha She Don’t Love You”—this handful of nuggets tells only a fraction of her rich and multi-flavored musical accomplishments over a decade.

Evelyn “Champagne” King’s importance in the world of ‘70s and ‘80s soul music is often underrated. While her name most commonly sparks conversation of the impactful disco classics “Shame” and “I Don’t Know If It’s Right”—in addition to seminal, Kashif-assisted synth-R&B gems “I’m in Love,” “Love Come Down,” and “Betcha She Don’t Love You”—this handful of nuggets tells only a fraction of her rich and multi-flavored musical accomplishments over a decade.

SoulMusic Records’ new eight-disc box set, The RCA Albums: 1977-1985, packs all of the evidence into a thoughtfully produced assemblage of nearly every song King released for the label from her debut at age 17 to her departure from the company as a sophisticated 25-year-old. Particularly striking in retrospect is just how wise beyond her years she was vocally and musically every step of the way. Indeed, the conviction with which she delivered the emotionally fraught dilemmas of “Shame and “I Don’t Know If It’s Right” in 1977 suggested an experienced woman of the world. Between her resonatingly deep undertones and her ability to execute phrases with alternating intensity and subtlety, listeners were provided with ample momentum to jump on to dance floors. T. Life’s well-rounded, full-fledged arrangements and productions served as ideal launching pads for her take-no-prisoners performances. Full-length disco mixes of both nuggets are added to the original album here.

It took RCA a bit of time to recognize the versatility of King’s artistry. While her 1979 sophomore outing, Music Box, built on her soulful strengths with hidden gems such as the moving “Let’s Start All over Again” and the majestic “Make up Your Mind,” the label focused mostly on furthering her disco stature via single releases “Music Box” and “Out There.” While the latter is a catchy tune, the title cut and several other tracks on the album fell into showy, almost gimmicky, territory clearly intended to reference other dance floor hits of the day—rather than further King’s creative growth.

King and producer T. Life strived for more flexibility the next time around, but were fighting an uphill battle. The fruits of their labor found in 1980’s Sweet Delight were to be short-lived, with the album being recalled only weeks after release. RCA replaced most of the edgier, rock-fused funk gems with more middle-of-the-road entries for the retitled and reconfigured Call on Me LP. This is not to knock the undeniable appeal of the uber-groovy single “Let’s Get Funky Tonight” or its passionate follow-up ballad, “I Need Your Love.” By this juncture, though, King’s commercial prospects weren’t looking as favorable—partially, undoubtedly, due to lack of a fully formed understanding of her talent by those behind the scenes. The RCA Albums box set includes all 12 tracks from both incarnations of the album.

While King and Life most likely could have continued to establish a fruitful collaboration under better circumstances, the emerging production team of Morrie Brown, Kashif, and Paul Laurence proved to be just the breath of fresh air she needed to reaffirm her standing in the marketplace. Very quickly, the ever-funky and -memorable “I’m in Love” placed King firmly back in the public eye. Aided by a nifty music video at a time when such a promotional tool was a luxury for many Black artists at major labels, the 1981 jam was indicative of a new kind of energy in the popular R&B landscape. Fashioned on a programmed beat, the chart-topping tune found King at her spirited best in her strong and assured delivery of the simple but engaging lyrics. On the I’m in Love LP, one of King’s most oft-overlooked singles, “Spirit of the Dancer,” matched that contagious musical and vocal vibe with a bit of a Michael Jackson Off the Wall influence. She also scored her first charting ballad, “Don’t Hide Our Love” (featuring a brief appearance by Kashif), as the LP’s second single. The full-length 12” mix of “I’m in Love” features here as a bonus track.

King cemented her newfound radio and sales prominence with the follow-up Get Loose in 1982. The unforgettable keyboard intro of “Love Come Down” which gave way to its uncontainable bass-lined groove and King’s alternatingly seductive and fiery vocals, promptly returned her to the top of the soul charts. The subsequent “Betcha She Don’t Love You” just missed the #1 spot. There’s no filler to be found on Get Loose, with selections like “Back to Love,” “I Can’t Stand It,” and “Get up off Your Love” all finding that remarkable meshing of groove and melody in which King’s sparkling vox and the Kashif/Jones/Brown production qualities are one.

The final three albums which King recorded for RCA would find her offering her signature versatility to a variety of styles. Unfortunately, none of the output was as far-reaching commercially; but a number of cuts on 1983’s Face to Face, 1984’s So Romantic, and 1985’s A Long Time Coming rank up there with the best of her work. Leon Sylvers and company helmed half of the content on Face to Face, including the robust pop-funk workout “Action,” while former Prince bassist André Cymone handled production for the remaining numbers. Although the LP is more of a mixed bag than its predecessors, the non-single cut, “Givin’ You My Love” (co-penned by female quartet Krystol) is a standout.

So Romantic saw King return to a more consistent sonic journey, even with four production camps on board. From the dynamic, uptempo opener, “Show Me (Don’t Tell Me)” to the moody and soul-stirring groove ballad “Till Midnight,” this penultimate set of her RCA tenure is arguably the boldest amongst her discography. Whether the vibe be electro-soul (“Out of Control”), sophisticated pop-dance (“Give Me One Reason”), or entrancing synth-R&B (“Just for the Night”), King is spot-on in her articulation, envelopment, and adorning of the story lines and their companion melodies.

A Long Time Coming (A Change Is Gonna Come), King’s last full-length RCA release, took its title from the Sam Cooke spiritual which played an important role in the start of her professional career. She’d been singing it casually a decade earlier in the midst of helping her mother clean the offices of Philadelphia’s famed Sigma Sound recording studios. T. Life heard her not-intended-for-an-audience rendition and recognized her innate ability and potential. Fittingly, after a five-year break, he returned to working with King in 1985—ironically, however, not on the title cut. Rather, he lent his—ahem—personal touch, to the effervescent opener, “Chemistry of Love” (a rare co-write by King), contagious “If You Find the Time,” and pensive ballad “If I Let Myself Go.” “Your Personal Touch,” the song itself, was written and produced by the team of Allen George and Fred McFarlane. With a groove slightly reminiscent of the duo’s hit collaboration with Jocelyn Brown (1984’s “Somebody Else’s Guy”), “Touch” returned King to the R&B top 10.

A Long Time Coming, although not quite as steadfast as So Romantic, is especially enjoyable to hear in this box set, thanks to the inclusion of two non-album “B” sides. “Take a Chance” is an enjoyable club romp that sounds nostalgic even for its time, while the David “Hawk” Wolinski (Rufus)-produced “Better Deal” is a real lost gem, which, interestingly was the flipside of King’s final single release for RCA—“Slow Down”—before she moved on to a new deal with EMI Records. Then-future Madonna hit collaborator Patrick Leonard co-wrote the irresistible ditty.

The RCA Albums: 1977-1985 is a must for any serious fan of 1980s R&B. Evelyn “Champagne” King’s prolific output over her nearly decade-long run with the label encompasses an abundance of everlasting goodness in vocal authenticity and tenacity, as well as song structure and production finesse. While a few cuts here and there might sound a bit dated or uninspired, King’s work throughout this period remains, by and large, exceptionally satisfying and relevant. A colorful accompanying booklet containing seldom seen photos and an informative historical essay provides a nice companion to the hours of gripping listening that lie within the eight discs. Highly recommended.