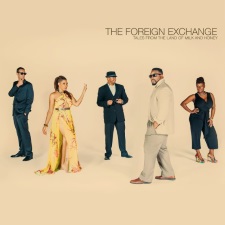 Click on CD cover
to listen or purchase
https://www.amazon.com/Tales-From-Land-Milk-Honey/dp/B01169B5X4/ref=as_sl_pc_tf_til?tag=soultracks-20&linkCode=w00&linkId=HS7KMQSKP3XHLJ54&creativeASIN=B01169B5X4

After a bated breath wait since the release of 2013’s Love in Flying Colors, the sixth full-length album from the Grammy-nominated artist collective known as The Foreign Exchange (+FE) has finally been released to the world to put global fans at ease. Much of the sound palettes used on Tales from the Land of Milk and Honey will be familiar to followers who’ve been around since 2004’s Connected. However, less prominent are the prevailing sense of melancholia and blues contemplation that threaded previous releases like Authenticity and even a good chunk of Love in Flying Colors.

After a bated breath wait since the release of 2013’s Love in Flying Colors, the sixth full-length album from the Grammy-nominated artist collective known as The Foreign Exchange (+FE) has finally been released to the world to put global fans at ease. Much of the sound palettes used on Tales from the Land of Milk and Honey will be familiar to followers who’ve been around since 2004’s Connected. However, less prominent are the prevailing sense of melancholia and blues contemplation that threaded previous releases like Authenticity and even a good chunk of Love in Flying Colors. Instead, multi-instrumentalist producer and composer, Nicolay, and hip hop impresario cum R&B singer, Phonte Coleman (aka Phonte aka Phontigallo), along with singers Carmen Rodgers, Tamisha Waden, and Shana Tucker all throw open the drapes, roll up the rug, cover the lamps, and pump up the funk ‘n’ bass in what can be considered their first party album since their vivacious +FE: The Reworks project. A sprinkling of soul pop ballads with a hint of the band’s thinking man’s soul nicely round out a return that largely satisfies.

Following such recent biting hits as “Better,” on Tales from the Land of Milk and Honey the bitterness has healed and the cynicism that characterized some of the band’s dark musical humor has yielded to brighter tones, groovier rhythms, and plenty of fun -- though rather than coming from Phonte’s pen and impeccable comedic timing, that spiritedness comes more from the music on boogie-woogie disco cuts like “Work It To The Top” and percussive ballroom grooves like “Body.” Lyrically, there’s more grace present on ballads like “Truce” and the introspection tends to point the finger inward rather than outward on “Face in the Reflection.” Even an interlude like the synthy piano ballad of “Sevenths and Ninths” is the sweetest of love letters. These are welcome shadings to the band’s catalog, expanding the kaleidoscope of human expressions +FE comments on and explores.

Tales… boasts many welcome additions to +FE’s fine body of work. The dazzling hip hop soul meets electronica art of “Disappear (featuring Carlitta Durand)” has the kind of layered progressions and harmonics that have characterized the best of +FE since the Top 25 R&B hit album Authenticity. The mocking “Asking For A Friend” is the kind of four-on-the-floor, percussion heavy party that made Chicago and Baltimore soulful house world-renowned music. The put-on, posh lead affected by Phonte and the track’s constant “work!” and “work that body, move that body” refrains, also makes it something of a send-up of ‘90s era house conventions. The searing sincerity of Phonte’s simple, yet vulnerable, leads on both “Face in the Reflection” and “Sevenths and Ninths” captures some of his most moving performances. And the thrilling ‘80s Jheri-curl and mascara band jamming of “Work It To The Top” perfectly illustrates that brief, transitional period when disco was yielding to funk and groups like Cameo were king.

Indeed there is much to recommend Tales from the Land of Milk and Honey. If there is a criticism of Tales… to be had, it's one only a long-time fan would notice: the band has definitely settled into a signature sound that now seems to be new contributor proof. How much this matters depends on what’s interesting to you about +FE. Right from the start, one of the most exciting things about The Foreign Exchange was the idea of this Dutch composer coming together from across the ocean with this Southeastern rapper turned singer and what unexpected and different sounds might come from such an unconventional musical marriage. In the 11 years since, the band’s ever revolving roster of artists who have had association with +FE under their indie label umbrella each brought something distinct and refreshing to that banner with each new release and line-up change, for better or worse, especially singular artists like Muhsinah, Yahzarah, Darien Brockington, and even country pop singer Jeanne Jolly.

But, in recent years Nicolay, Phonte, and Zo! (whose current sound now both mirrors and almost indistinguishably complements Nicolay’s) have settled into the cool +FE hybrid sound of synthy and sometimes funky electrosoul to such an extent that the talents of +FE newcomers like Carmen Rodgers and Tamisha Waden are used in ways that are nearly indistinguishable to the ear from the ways Sy Smith, Gwen Bunn, and Carlitta Durand were used in the past in harmony and support. Of the female vocalists of old, only Shana Tucker remains from Love in Flying Color as both writer and background vocalist, here blending right into the machine. Long-time recording artist Carmen Rodgers is a solo artist in her own right and co-writes three cuts on this latest creation, but again any distinction of her sound has been swallowed whole by the +FE sound and compositional approach.

Other rotating artist outfits like Incognito have found ways to be consistent and yet still avoid the charge of predictability by really showcasing what the different contributors bring to Bluey and the band’s soundscapes, which has helped in their longevity and bringing new folks onboard through the decades. More recently, outfits like Reel People also keep it fresh in a similar fashion. There may be lessons in there for +FE as it enters its second decade in the industry.

Which is not to say the band has become stale; far from it, as Tales From The Land of Milk and Honey can attest. Even though the album opens with its trademark sound effect that announces every new +FE album, the woodwind accented, Brazilian holiday of “Milk and Honey” that followed is unlike what has been heard from the band before, in verve and vocal interplay. The exciting track reads more like a featured single on one of Nicolay’s more experimental solo projects, but in its Afro-Latin warmth, organic feel, and jazz sensibility it is something even different from those works. What “Milk and Honey” and other gems off of Tales… proves is that there’s still plenty of milk in them there hills. Highly recommended.

Correction: Both Carlitta Durand and Carmen Rodgers had featured guest spots on Love in Flying Colors, not just Shana Tucker.