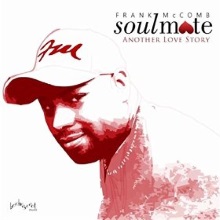 Click on CD cover
to listen or purchase
https://www.amazon.com/Soulmate-Another-Story-Frank-McComb/dp/B01I2M1DBC/ref=as_sl_pc_tf_til?tag=soultracks-20&linkCode=w00&linkId=724e4fe9384e9cfd618d3ca908d31364&creativeASIN=B01I2M1DBC

I’ve viewed Frank McComb primarily as a balladeer. There is good reason for this. From a vocal standpoint, McComb possesses a lusciously emotive yet smooth baritone that wraps itself around the lyric of a ballad in a manner reminiscent of Donny Hathaway – an artist McComb gets compared to often in large part because of that baritone and because of McComb’s skill on the keyboard.

I’ve viewed Frank McComb primarily as a balladeer. There is good reason for this. From a vocal standpoint, McComb possesses a lusciously emotive yet smooth baritone that wraps itself around the lyric of a ballad in a manner reminiscent of Donny Hathaway – an artist McComb gets compared to often in large part because of that baritone and because of McComb’s skill on the keyboard.

However, while reacquainting myself with the McComb songbook for the review of Soulmate: Another Love Story, it quickly became clear that McComb’s music is far more diverse than that initial perception. A tune such as the mid-tempo “Actions Speak Louder Than Words,” from his 2004 project The Truth, is a soul/funk/gospel expression of frustration with somebody who tends to talk about it rather than be about it – and might not be the first cut that comes to the mind of non-hard core McComb fans.

Those initial perceptions versus reality serve as a jumping off point for an exploration of Soulmate: Another Love Story, an album that harkens back to McComb's seminal debut album from 2000, Love Stories. The project is McComb’s full length project expansion on a four track EP, also titled Soulmate: Another Love Story, released in 2015. The EP included the tracks “This Love of Ours,” “Feelin’ Some Kinda Way,” “Soulmate” and “She Needs True Love Too.” With additions that include a cover of Stevie Wonder’s “Superstition” and several instrumentals showcasing McComb’s chops on the electric keys along with mid-tempo grooves and his signature ballads, listeners receive a representative sample of McComb’s skill set.

I like the ballads, but  I really like seeing the funkier side of McComb that frequently appeared on past projects but came to fore here primarily on the instrumentals, collaborations with performers such as Avery*Sunshine and Najee on “Feelin’ Some Kinda Way,” as well as his duet Maysa on the laid back and funky cut “Labeled As Love.” Then, there is that hard cover of “Superstition” that features drums laying down a shuffle beat, bluesy, twangy guitars and a hard charging, percussive bass line that seems to inspire McComb to be even more creative on the keys on this eight and a half minute joint. McComb shines vocally on “This Love of Ours,” an up-tempo and joyous celebration of a love that overcame the doubts of the naysayers. “We had to be real careful/Dealing with friends and family/Looked me dead in my face and said we wouldn’t make it past year number three/20 years later/Look at God you and me and this love.”

“Like Chicken” is one of three tracks that provide a place for McComb to showcase his creativity on the keyboards (the other two being his solo on “Superstition” and “There Are No Words”) “Like Chicken” is a seven plus minute jam session that features McComb on electric keys and synthesizer and his creativity proved that he was up to the task and totally engaged in a track that keeps the listener’s interest as well.

On Soulmates: Another Love Story, McComb creates a record that has the format of projects from the 1970s golden era of soul music. That’s not to say that McComb is striving for an old school sound - although his work on the electric keys does give the record a classic feel. Rather, by including instrumental tunes that include jazz-influenced solos along with vocal cuts of varying pace, McComb reminds listeners that music at its best is a collaborative venture. And it reminds McComb’s most faithful fans that the man still has it, sixteen years after we first heard his Love Stories. Recommended