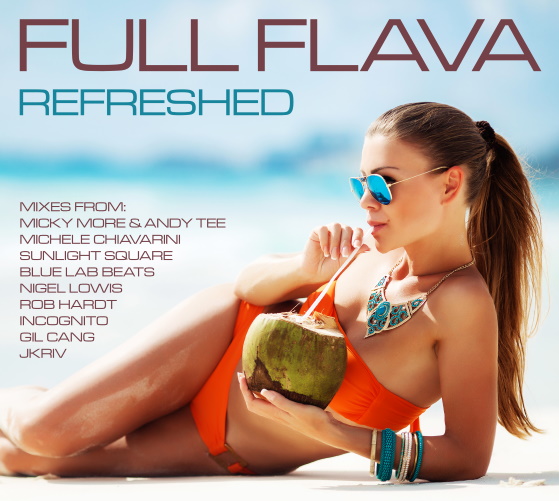 Although Full Flava has only released new tracks sporadically over the past decade, its following has remained intact via updated remixes and compilations. Expanding upon that angle, the two-disc Refreshed collection showcases an album’s worth of key cuts from earlier sets with restructurings both by Derbyshire and outside producers, while adding in several new cuts. Well-received takes on Jean Carne’s “Was That All It Was,” Quincy Jones’ “Betcha Wouldn’t Hurt Me,” and Patti LaBelle's “Music Is My Way of Life” are revisited  are revisited with danceable elements that maintain the core soulfulness of the initial mixes and boost the sonic highlights a bit for new listeners.

Disc one of Refreshed is comprised of remixes by the likes of Incognito, JKriv, Rob Hardt, and Nigel Lowis, while disc two is centered around Full Flava’s own updates of the selections. In both cases, the treatments are well steeped in preserving the vibes of the earlier Full Flava takes and the original artists’ recordings. Micky More and Andy Tee’s remix of “Was That All It Was” (featuring Carleen Anderson) opens the collection on an inviting note with appeasing guitar and percussion patterns swirled by nocturnal keyboard rays paving a solid path for Anderson’s deep and crisp tones. Soft and dreamy textures, meanwhile, are added to Dee Johnson’s feature, “Too Much Too Late,” on Lowis’s Philly remix.

A few numbers don’t come across as convincingly. The Gil Cang remix of “Bad Habits” does nothing to enhance the attitude of the song or Kelli Sae’s vocal, and the Sunlight Square remix of “September,” featuring Chantay Savage, veers away from the distinctive vibe of the 2006 mix and pivots to a low-rent imitation of Earth, Wind & Fire’s original. Savage’s warm delivery shines through more on the Full Flava 21st September remix on disc two.

Incognito, whose Joy Rose is also featured on a cover of Lisa Stansfield’s “Change,” embellishes a new rendition of George Benson’s “Love x Love” with kinetic tropical elements and jazzy flair. Both their mix and the “Love Flava Album Version” are redeeming reimaginings highlighted by Izzy Chase’s endearing performance. Savage also returns to the fold with a vibrant cover of the late Oliver Cheatham’s ‘80s masterpiece “Get down Saturday Night.” The original is untouchable, but Savage’s hearty tone and expert phrasing are most delightful to hear on record again. Full Flava includes two mixes on Refreshed of the tune, with the “Saturday Night Sunday Morning Mix” featuring saxophone melodies complementing the verses and choruses.

In an age of segmented listening via instant streaming and choppy playlists, Refreshed is a welcome assemblage of consistently soulful dance tunes and midtempo jams. The vocal presence of prime British R&B divas translates to close to two hours of motivating performances that enrich the satisfying grooves from start to finish. Recommended.