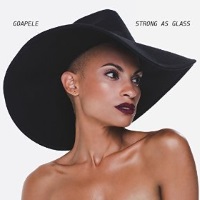 Click on CD cover
to listen or purchase
http://www.amazon.com/gp/product/B00N4MSVJI/ref=as_li_tl?ie=UTF8&camp=211189&creative=373489&creativeASIN=B00N4MSVJI&link_code=as3&tag=soultracks-20&linkId=ZKTM4JT64SEIFOXC

Goapele Mohlabane possesses a distinctive name, background story and voice. Her first name means “to move forward” in Setswana, a language spoken in South Africa, which is the homeland of her father, Douglas Mohlabane  The elder Mohlabane was a political dissident and exile during that country’s Apartheid era, and he went to college in Kenya. That is where he met Goapele’s mother, Noa, a woman of Jewish descent who had been attending rallies and participating in causes with her parents since she was 12. The couple eventually settled in the Bay Area’s South African exile community.

That background explains why Goapele is the rare R&B singer in the post classic soul era who continues to make albums that have significant political content. Music fans can still hear politically charged content in rap; and although Goapele is a singer who has no intention of rapping, she’s a big hip-hop fan, so infusing her lyrics with politically charged content comes quite naturally to the Oakland native.

I thought that Goapele’s voice stood as her most distinctive quality from the moment I first heard the title track on Even Closer more than a decade ago, and the things that make her voice unique can still be heard on her long-awaited new disc, Strong As Glass.

Goapele possesses a vocal instrument that is haunting, ephemeral, smooth yet passionate. Her vocal’s ideally fit the sparse love ballads and political anthems that have been Goapele’s calling card. So, it’s slightly surprising to hear her switch things up on “Hey Boy,” the first single from Strong As Glass. The up-tempo track is Goapele’s strong pitch for radio airplay, and will definitely find a warm reception among the steppers set. “Hey Boy” finds Goapele tapping Snoop Dogg - who must have some kind of app on his mobile phone that issues an alert whenever a singer is looking to collaborate with a rapper - as a duet partner. The pairing of these two distinctive voices sounds intriguing, and one can understand why singers want Snoop’s conversational So-Cal drawl on their records. However, Goapele brings and maintains the seductive playfulness and energy on this track. She adds a come hither joy to her contribution to the song’s hook. Snoop’s rap begins with an awkward effort to establish a rhyme pattern with Goapele, but Snoop does recover when he shifts tempo by singing at the end of his contribution.

Goapele scores on “My Love,” another duet with a distinctive male vocalist – in this case Eric Benet. Benet’s wedding song ballad with Tamia, “Spend My Life,” still holds up well 16 years later. That track has a reverential, standing before the preacher and pledging to forsake all others feel. Goapele and Benet infuse “My Love” with a “turn it up with my baby because I am with the most beautiful person in the room” (they’d probably both be right on that count) vibe.

Still, Goapele is at her absolute best on Strong As Glass when she stands alone. The one thing that becomes clear to anyone who has followed Goapele’s career is how she has advanced as a songwriter. That becomes clear on title track that opens the album. “Strong As Glass” is an excellent anthem for the for women who do it all and often get taken for granted in the process. The song serves as a reminder that the things people depend on to provide protection and comfort have a breaking point, and Goapele – who has a singing style that conveys vulnerability in a way that few others can match – is in her element on this track. The lyrics drive home the strong-weak duality that tells the story of the modern women. The lessons can apply equally to lovers, children and the legion of others who constantly chip away at our wives, sisters, mothers and auntees.

“I know I’m strong/I’ll brave the storm/I know can take a few hits/You ain’t got to worry ‘bout this/Stay my zone, take care of my home/Always got my own/But be gentle with me/cuz I’m human baby and I’ll break/I might not make it.”

“Strong As Glass” won’t be viewed as overtly political in the manner of the anti-war anthem “Red, White & Blues.” However, the tune speaks to a situation in many homes throughout our community of caregivers, (primarily but not exclusively) women being pushed to the breaking point.

“Perfect” is another cut that finds Goapele showing that a political anthem does not necessarily have to be a protest song. Here, she simply wants to protect those she loves from the dangers of the streets. “They say choose you battles, babe/So I’m fighting for your,” she sings.

“Truth Is,” the album’s final track, allows Goapele to close Strong As Glass with a flourish. The singer notes that was she was honored when R&B and hip-hop wunderkind Drake sampled her breakout single “Closer,” and some might hear in “Truth Is” as a homage to Drake in Goapele’s vocal delivery and rhyming pattern, as well as in the booming bass and percussion that is a part of the contemporary R&B and hip-hop arrangement.

Goapele has remained true to the meaning of her first name throughout her career. She continually moved forward. That determination and focus earned her a major label deal for Even Closer and the fruits of that advance can be heard in the a artists whose lyricism now matches the uniqueness and maturity of her vocal instrument. And while choosing “Hey Boy” was a the right play for an artist seeking much deserved radio play, the hope is that Strong  As Glass garners enough attention that the broader public can be exposed to the title track and other worthy numbers. Strongly Recommended.