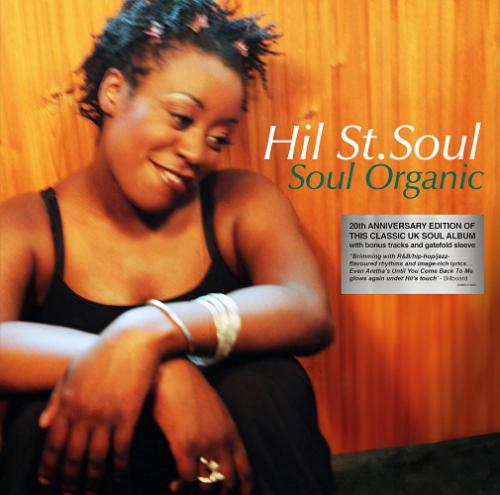 Click on CD cover
to listen or purchase
https://www.amazon.com/Soul-Organic-Anniversary-HIL-SOUL/dp/B07TMRRRNV/ref=as_sl_pc_tf_til?tag=soultracks-20&linkCode=w00&linkId=ac06bab2764da791fa603a7704868277&creativeASIN=B07TMRRRNV

The British duo of vocalist Hilary Mwelwa and producer Victor Redwood-Sawyerr turned heads around the globe at the turn of the millennium with their first album, Soul Organic. Arriving on the music scene a few years after the rise of Maxwell, D’Angelo, and Erykah Badu in the States, the collectively coined Hil St. Soul put their own spin on ‘90s neo-soul and set the precedent for many UK R&B artists debuting in the 2000s.

The British duo of vocalist Hilary Mwelwa and producer Victor Redwood-Sawyerr turned heads around the globe at the turn of the millennium with their first album, Soul Organic. Arriving on the music scene a few years after the rise of Maxwell, D’Angelo, and Erykah Badu in the States, the collectively coined Hil St. Soul put their own spin on ‘90s neo-soul and set the precedent for many UK R&B artists debuting in the 2000s.

Soul Organic has remained one of Dome Records’ top-selling albums over the past two decades, and in celebration of its twentieth anniversary the label has reissued it digitally, as well as on a deluxe double-vinyl edition. Mwelwa and Redwood-Sawyerr collaborated on the writing of the tunes that make up the album, and the resulting resonance and fluidity rings true still, lyrically and musically. Five singles were released, and each represents a different melodic piece of Hil St. Soul worth revisiting (or checking out for the first time).

A particularly impactful moment comes via the endearing and funky “There for Me,” a delightful number built on frankly positive lyrics, multi-layered harmonies, and rich and full instrumentation. “When my confidence was at its lowest point, and with little motivation to carry on/You gave me the boost of energy, gave me the will to persevere,” Mwelwa conveys in earnest. “You are my creative spark/You inspire, ignite my fire, ‘cause you know how to bring out the best in me.”

“For Your Love” takes the groove in a bass-driven direction with plenty of piano goodness and guitar stroking mixed in for good measure. Both the lead vocals and male backing harmonies bring the tune’s feel-good stance to memorable fruition. Meanwhile, the simple and striking remake of Aretha Franklin’s “Until You Come Back to Me,” which became a staple of contemporary jazz stations in the U.S. in 2000, continues to shine as an exemplary cover of a Queen of Soul classic. Mwelwa retains the essence of the message without trying to emulate Franklin. The driving groove makes for a nice counterpoint to her soft-stirring performance.

“Give it up, represent and give props to our roots…much respect is due to our peers, our creators, soul survivors, pioneers,” Mwelwa affirms on the laid back head-nodder “Props.” The track’s musical understatement supplies the ideal platform for her cool and stylish relaying of a message steeped in respect and balance: “I know the only way forward’s going back to my roots/Embracing old tradition, coupled with the new.” Also in a reflective vein, but carried out in a more uptempo vein with a bounce to it, “Nostalgia” celebrates the therapy of reliving fond memories. With smooth phrasing and sassy harmonies, the vocal approach is lighthearted yet convincing.

One of Soul Organic’s most popular tunes, “Just a Matter of Time,” is also included on the vinyl reissue in the sought-after VRS Remix. While the original version is a sho ‘nuff funky ditty with a Brand New Heavies vibe and enticing handclaps enhancing the driving beat, the remix retools the anthem of self-determination as a savvy synth-funk affair that’s equally equipped to draw reluctant club patrons to the dance floor. On the slower side, “Free Spirit” coaxes with sound and assured passages of strength and contentment delivered with a crisp calmness. With chorus melodies performed in a spiritual-like manner, the gently groovin’ number is simultaneously an ideal pick-me-up and exercise in musical meditation.

Soul Organic stands as an honorable reminder of the power of unprocessed R&B rooted in purposeful lyrics, authentically structured melodies, no-frills vocals, and from-the-hip, affecting musical arrangements. The material within is as fresh today as it was upon release 20 years ago. There’s a thread of positivity running through the album that makes for consistently meaningful listening, and the music and voice bringing that thread to life make the set a most pleasant experience. Highly recommended.