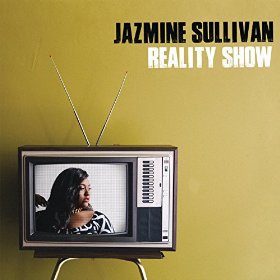 Click on CD cover
to listen or purchase
http://www.amazon.com/Reality-Show-Explicit-Jazmine-Sullivan/dp/B00QG3057S/ref=as_sl_pc_tf_til?tag=soultracks-20&linkCode=w00&linkId=WATEZPFWUQJOZU4F&creativeASIN=B00QG3057S

It is a cliché to say from great pain comes great art, but like most clichés, there’s a reason why we believe it: there is so often some truth to it. When Jazmine Sullivan left us nearly five years ago, to take a semi-retirement break from the business, following the release of her sophomore album, Love Me Back, it was because she was broken and no longer sincere. Despite incredible vocal skill and some great songs on the project, that lack of sincerity shown through her live performances, especially on her BET 106 & Park showcase that year. It was an artist going through the motions, deeply unhappy with herself and her life and it bled through her promotional run.

It is a cliché to say from great pain comes great art, but like most clichés, there’s a reason why we believe it: there is so often some truth to it. When Jazmine Sullivan left us nearly five years ago, to take a semi-retirement break from the business, following the release of her sophomore album, Love Me Back, it was because she was broken and no longer sincere. Despite incredible vocal skill and some great songs on the project, that lack of sincerity shown through her live performances, especially on her BET 106 & Park showcase that year. It was an artist going through the motions, deeply unhappy with herself and her life and it bled through her promotional run. Upon her return in a series of set-up interviews as part of the album rollout for her junior release, Reality Show, she’s been candid about that time, including: her lack of self-love, the flirtations with considering drug abuse, and a tumultuously unhealthy relationship. During two years of that hiatus, Sullivan wrote and recorded her most personal and artistically triumphant album to-date, the brilliantly conceived Reality Show.

Her latest, greatest inspiration is produced by Key Wane, Salaam Remi, Da Internz, Joe Gallagher, Anthony Bell, and more. Absent her usual production partner in Missy Elliott, Sullivan still proves able to stand tall throughout this project, especially on lyrics and vocals. Not even yet 30, Sullivan as a storyteller is at the very top of her game. On Reality Show, she has taken her astute and starkly honest observations of street life, love, and relationships to breathe new life into a series of first-person perspective tales of various flawed, three-dimensional women on par with a series of one-act plays. Sullivan has said that she wrote this for the listener that appreciates the reality show and the Broadway play, that street to high art juxtaposition is illustrated repeatedly in urban tales usually reserved for the all boys hip hop club, inclusive of some of the harsh and profane language those boys are known for as well.

On the bright, uplifting “Silver Lining” there’s a twist as the protagonist transitions from hopefully wishing her way of out poverty to snatching her own silver lining. On, “Mascara,” the satirical editorial on the lives of reality show women, groupies, and other THOTs looking for the easy way to “the good life,” Sullivan sends up these competitive, cynical, and overly self-conscious women’s anxiety-ridden inner lives, but does so with quiet empathy. Her “Brand New” sister is one who stood by and supported the starving artist dude when he was down and out, and is dropped faster than an artist going double wood once the would-be rapper gets signed. The anti-cheapskate anthem of “Stanley” tries to appeal to the man who’s taking for granted the good woman in his corner. Conversely, “#HoodLove” exalts and extols the ride or die woman who is in love with her supportive ruffneck and is down for whatever crimes required in honor of their rare love. “Stupid Girl” and “Dumb (feat. Meek Mills)” are opposite ends of the same coin where one chastises the gullible, low self-esteemed woman who allows herself to be taken advantage of, while the other chastises the man who underestimates his smart cookie chick. There are other tales of different kinds of women and circumstances familiar to anyone paying attention. Collectively, they comprise Sullivan’s version of Nina Simone’s “Four Women” or Ntozake Shange’s For Colored Girls Who’ve Considered Suicide When The Rainbow Is Not Enuf.

For those not looking for hip hop soul tales, Sullivan’s got a handful of traditional R&B fare to balance out the set. She starts with the second single, "Forever Don't Last, a torch song ballad to a love gone wrong. She then moves into the obsessive love of “Veins” and rounds it out with the smoldering groove of “Let It Burn.” The latter, a winner, is reminiscent of Tony Toni Tone’s “Loving You” and After 7’s “Ready or Not” in its interpolations and melodic lines. The melodramatic perfection of “Forever Don’t Last” could have dropped straight from the ‘70s projects of artists like Mavis Staples and Aretha Franklin, and is the least like anything else on this very contemporary set. Meanwhile, “Masterpiece (Mona Lisa),” a personal testimonial of Sullivan’s own emotional journey from self-destruction to self-actualization and self-love, moves from a spare synth rock to a choral soul epic that builds as Sullivan grows into herself. The power ballad is an apt metaphor for the musical journey of this artist, one whose hit songs to-date are usually characterized as angry women anthems, but here have gained greater nuance and depth. This time a reflective Sullivan turns inward to explore why she and other women have allowed so much of what happens in their lives to unnecessarily occur, what abuses that makes these women so angry in the first place, committed by those so often not worthy of them, including those self-inflicted crimes. In that way, “Masterpiece,” like Reality Show, is its own masterpiece.

Even the weaker songs on the set, like “Veins” and the pop rock try of “If You Dare,” have something to say. All of the songs, for the most part, raise mirrors for listeners to see themselves and their performances in this reality show called life. Throughout, Sullivan subtly urges them to make a different choice, even while usually not judging the choices they’re making, sometimes even empathizing with those survivalist decisions. Sullivan also just knows her way around a good yarn.

Musically, the project is unique too. There are some of the usual synthy pop-rock backdrops present, but in how the samples are used, the results are far more than routine. Tribal drums and percussion feature prominently on this set. These rhythmic, almost hypnotic throbs characterizing much of the hip-hop soul productions, tie these modern soundscapes to the old African griots who told stories in the round to the beat of the drum. With her bevy of producer collaborators aiding Sullivan, right now there are few major label R&B female artists demonstrating this kind of subtle reverence for the classics, the street, the tribal, while also moving both the genre and art not just a little bit forward, but boldly forward into new territory, and doing so without necessarily taking the multi-hybrid, no-genre approach we’ve seen from experimental urban artists of late. Reality Show is an exciting project from an artist who has re-discovered her own excitement in both music and herself again, and that’s great news for the artist, the genre, and us, the fans. Highly Recommended.