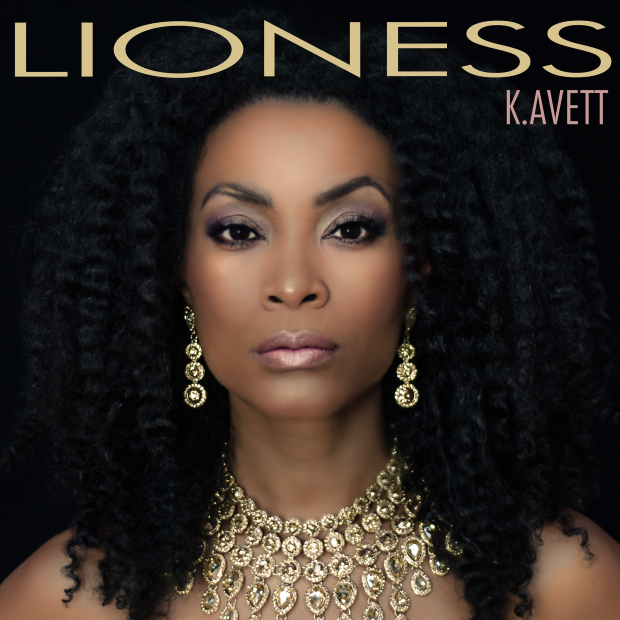 Click on CD cover
to listen or purchase
https://www.amazon.com/Lioness-K-Avett/dp/B07BZZLGBD/ref=as_sl_pc_tf_til?tag=soultracks-20&linkCode=w00&linkId=4f867fc51dbc3d360ba3dfabffd3c0ea&creativeASIN=B07BZZLGBD

Listening to Lioness, the sophomore album of Texas-based singer-songwriter K. Avett, inspired remembrance of one of Sesame Street’s most distinct jingles: one of these kids is doing his own thing; one of these kids don’t belong. In this instance, the lack of mainstream cultural belonging for Avett is a good thing. The very best thing, really. Though her agile, church-meets-jazz alto sometimes can sound like a slightly nasal Faith Evans, Avett’s sound has a style and timbre that is as unique as her increasingly rare songwriting skills. Arranging fresh songs in ways that support the very best of both herself and Jordache V. Grant’s live band (that is its own star player throughout the project), Avett, the songwriter, and producer Ty Macklin also don’t lose sight of how to keep fickle listeners tuned in through the well-placed riff, dynamic harmonies, and infectious hooks. With the string and horn fortified 10-track album clocking in at less than 40 minutes, Avett also has learned that key rule in music: leave them wanting more.

Throughout Lioness, K. Avett often takes the power position of teacher, leader, and sage; offering advice, warnings, and directives to the listeners she seems keen on inspiring with interrogative questions to help them reflect on their lives, choices, and even their politics. Unlike much of the current heroines of soul, Avett presents herself as neither damsel in distress lamenting what was, nor lovelorn lark chirping for faraway princes. Instead, Avett presents an empowered woman of agency and accountability, protecting herself, her beloveds, and community with a fierce love and loyalty. A lioness. Well fulfilling the lofty prophecy of the album’s powerful title.

Sonically, K. Avett’s songs clearly pull from traditions in soul, jazz, and gospel music, with a bit of down home, country-infused speakeasy sounds thrown in on occasion to complicate easy charges of high-brow sophistication and heavy-handed “wokeness.” Lyrically, Avett is keeping counsel with the socially conscious and romantic artists and material of the early half of the seventies, like Roberta Flack, Curtis Mayfield, and even The O’Jays, before the advent of disco, runaway individualism, and hedonism. However, there is nothing throwback about the presentation of this modern project that musically or lyrically lives very much in our now.

Cuts like “The Matter (What Are We Here For)” deliver heavenly harmonies against compelling existential questions. Sweet jams laden within the cut pro-Black messages about Black people as royalty and childrearing (“I’d be a fool to let my foe raise my child”). Whereas wise woman counsels like “Time Won’t Wait” and life lifters like “Feelin’ Good,” a nod to the Nina Simone classic, are bright swings ushering in their own Vitamin D enrichments.

Relatable kick ass anthems like “Think I Had Enough” and inspirational two-steps like “Soldier” are a bit of pent-up church and a bit of country jamboree rousing folks to be encouraged, don’t take nobody’s stuff, and keep it moving forward. On the duo’s Pentecostal workout, the industry’s criminally underused Noel Gourdin is a very able duet partner to Avett’s soul infused jazz vocals throughout “Soldier.” Though the real church comes through the slow burning surrender of “In My Life,” where Avett leaves little doubt of where some of her early influences and training derived and movingly closes out this love and light procession.

Rounding out this fine, curse-beating sophomore project produced by Macklin are two slim Jim cuts thin enough to be considered interlude snacks but nutritious enough to be considered a meal. “Confusion” is a finger popping bit of acoustic soul showcasing Avett’s phrasing abilities and the trademark harmonic backgrounds that are becoming a signature of her work. The guitarist here also does a yeoman’s job of accompanying this 2:19 sliver of joy. The declarative, syncopated title track illustrates Avett’s ability to sing in the basement of her range, playing in tenor territory and cleanly creating enough movement down there to show she’s just as comfortable painting with dark lows as she is with aerial highs.

As even these slender moments suggest, Lioness is a surefooted offering messengered by a fully realized artist that appears to be at the height of her personal, spiritual, and technical powers. From the musicianship to the songcraft, nothing is lacking. And in these days of mind-numbing sameness, this makes K. Avett’s second album the best kind of cultural outlier. Highly recommended.