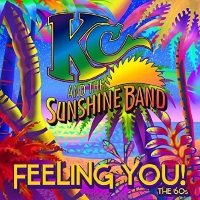 Click on CD cover
to listen or purchase
https://www.amazon.com/Feeling-You-60s-Sunshine-Band/dp/B00QMD2ZIY/ref=as_sl_pc_tf_til?tag=soultracks-20&linkCode=w00&linkId=23WTBSNGN5WMNNUY&creativeASIN=B00QMD2ZIY

When disco roared like a raging fire, there probably wasn’t a band that dominated the stratosphere of pop in the late 1970s like KC & the Sunshine Band. Sure Chic came close, but the Miami-based funky bunch led by the songwriting frontman Harry Wayne Casey pulled off six Top Ten hits, five of them shooting to number one (“That’s the Way (I Like It),” “Get Down Tonight,” “Shake Your Booty” “I’m Your Boogie Man,” “Please Don’t Go”).

After netting the last Top 20 hit in 1983, the band’s recording output diminished to a crawl. Personal struggles marred by substance abuse wreaked much of Casey’s life in the post-disco era. And, although he and the band re-grouped and returned to road shows in the ‘90s, studio life seemed out of the question. Now as the band arrives on the dawn of their 40th anniversary, Casey feels drawn to recording again. While working in the studio on new compositions, Casey and a more refined and polished Sunshine Band felt inclined to re-record a few songs from the songbook of yesteryear. A few songs mushroomed into a full set, ultimately transforming into Feeling You: The 60s – a massive 17-track collection of cover tunes all originally released in the 1960s. It’s a tribute to some of the era’s most iconic songs that ultimately shaped the Miami/Sunshine sound, playing like a music soundtrack of Casey’s own upbringing.

There’s a lot of fun and adventure tucked inside this set. What is most striking about the project’s musical terrain is how impressive the band plays. Almost entirely replaced with a fresh cast (except for Casey and percussionist/arranger Fermin Goytisolo), the “new-and-improved” Sunshine Band is decked out with opulent horns, supporting background harmonies and a kick-ass rhythm section led by musical director Chris Cadenhead. It is their mighty performance on these classics’ tailor-made arrangements that exposes some of the band’s best playing since 1976’s Part 3. “Dreams,” a surprisingly funky take on the Allman Brothers’ classic, is the album’s high point. Despite the unnecessary use of auto-tune on Casey’s vocal, it is fully surrounded by the funky, mid-tempo gusto heard on “Sound Your Funky Horn.” There’s also sweet deposits of their signature sunshine pop sound on Shades of Blue’s “Oh, How Happy” and the Bee Gees’ “Words.”

Many of the tunes, like “Sweet Soul Music,” “You’ve Really Got a Hold on Me” and “Tell It Like It Is,” follow the pattern of their original arrangements, but every now and then the band takes a pleasing experimental detour. Casey’s tropical take on Joni Mitchell’s “Both Sides Now” superiorly trumps the adult contemporary garnishes of the original. “(There’s) Always Something There to Remind Me” comes packaged with the one-two punch of Motown royalty. “Stand By Me” fires up a rhythmic, up-tempo explosion that seems peculiar, given the song’s traditional doo-wop blueprint. “Bring It On Home to Me” is fervently tagged with a country-fried gospel vamp. Each of these covers taking a risk in new directions.

On Feeling You…, Casey also leaves enough room for a number of ballads, even showcasing a rare side of transparency and vulnerability on a soulfully slowed-down take of the Supremes’ “I Hear a Symphony.” The biggest standout of these slow jams is the Copacabana-tinged remake of the Righteous Brothers’ “You’ve Lost That Lovin’ Feeling.”  Deep inside, lead singer Jason Scheff (of the band Chicago) can be heard singing alongside Casey and his league of singers. Scheff's appearance on that track isn't exactly noticeable, but his name presents a smudge of starpower.

Not everything aboard Feeling You: The 60s is a total knockout. When Anton Boyarkin’s electro-pop production drizzles upon “You Keep Me Hanging On,” the musicians are forced to take a backseat to the subpar EDM sounds. The vocals on the 64-year old frontman have diminished a bit over the years, with a sound engrained with a cloudy coarseness. The extensive album length also seems a bit tedious for the average contemporary listener. Feeling You, if condensed, would have been totally mesmerizing. As it stands, the project is still a pleasantly rewarding journey, one saturated in the love of melodic jukebox nostalgia. While paying tribute to their inspirations, KC and the Sunshine Band find a befitting way to kick off a tuneful celebration on a milestone anniversary. Recommended.