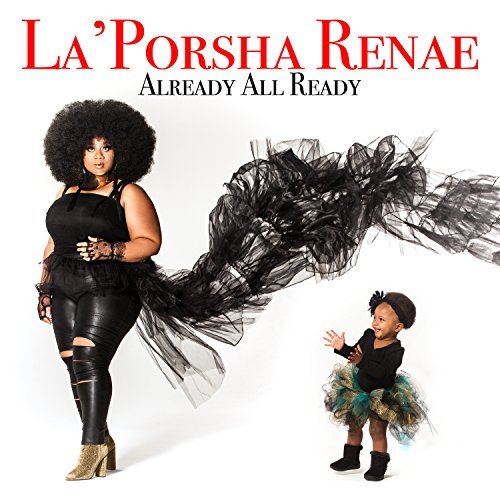 The assertiveness that courses through everything about Already All Ready, La'Porsha Renae’s very good debut album, is true and hard earned. She’s faced more than her share of setbacks, but she always returned - surely a little wiser, probably a little bloodied, but defiantly unbowed.

The assertiveness that courses through everything about Already All Ready, La'Porsha Renae’s very good debut album, is true and hard earned. She’s faced more than her share of setbacks, but she always returned - surely a little wiser, probably a little bloodied, but defiantly unbowed.

The Macomb, Miss. native auditioned for American Idol, twice - an early washout at 16, before wowing her way to runner up status in the show’s final season. Renae survived an abusive marriage while giving birth to a daughter. She endured homelessness before finding success, and then successfully resisting repeated attempts by the suits to change her image, right up until the time when she was going back and forth with the marketing people over Already All Ready’s cover art. Renae made the call on the cover art that features the singer standing tall, decked out in a black with that lovely afro adorning her head and her daughter, Nayalee Keya, cheering her on.

The adorable little girl’s presence on the album cover showcases the you-get-what-you-see frankness that comes through from beginning to end on Already All Ready. The child motivated Renae’s decision to break free from the abusive relationship and to take another crack at Idol. Now that the singer has broken into mainstream with the retro R&B feel of the percussive “Good Woman,” Renae sees no need to fake the funk.

The aforementioned radio hit is the album’s most soul and blues oriented track, with deep percussive proto-funk arrangement that is a nod to the Godfather’s “Its Man’s World” and a flat footed demand for respect derived from The Queen of Soul’s “Do Right Woman, Do Right Man.” However, the blues is at the root of each of Already All Ready’s 13 tracks, and that includes tracks such as the contemporary R&B/hip-hop fused “When In Rome,” with it’s programmed drums.

These days the blues conjures up images of downtrodden, poorly educated sharecroppers in the Mississippi delta singing songs that bemoan the fates on makeshift guitars. That people use adjectives such as depressing, old and country to dismiss the genre that is the root and base of all American music speaks to the poor state of art education. The blues are, instead, a musical examination of the truth of the human condition, and Renae’s life story, her rooted in the church vocal style, the attitude that she brings to her musical storytelling and the fact that she is a Mississippian (although not from the delta) gives her the kind of organic affinity to blues that comes across in a song such as “Somebody Does.” That track finds her offering the coup de gras to guy who has committed one slip up too many. She adopts a conversational tone in the verse as she breaks down why this relationship needs to end and then soars into the choir stand on the hook.

Additionally, Renae is in a line of women blues, soul and R&B singers who asserted their humanity and claimed their agency in the songs that they sang. Far from being a long-suffering, woe is me record, Already All Ready is a record filled with anthems and stories that extol women who know their worth. Nayalee Keya should be proud. Highly Recommended.