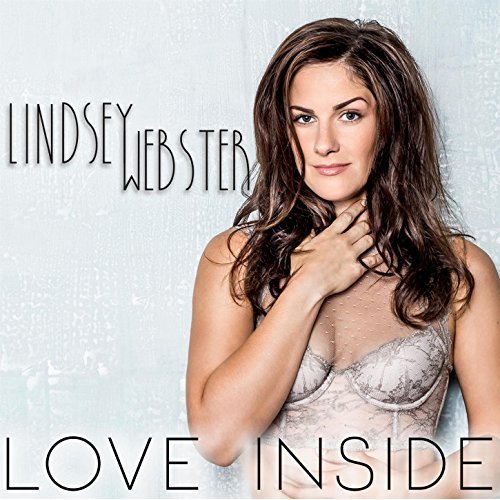 Click on CD cover
to listen or purchase
https://www.amazon.com/gp/product/B078XMBTFX/ref=as_li_qf_asin_il_tl?ie=UTF8&tag=soultracks-20&creative=9325&linkCode=as2&creativeASIN=B078XMBTFX&linkId=77da4c25dcc5227fbce465aab3ec28d4

The multiple movements of the title track of Love Inside might be the best way to introduce a casual music listener to the glorious talent that is Lindsey Webster. Each movement bringing out the different strengths of both Webster’s instrument and the arranging and compositional prowess of Webster and her husband and musical partner, Keith Slattery, on the opening of their fourth project together.

The multiple movements of the title track of Love Inside might be the best way to introduce a casual music listener to the glorious talent that is Lindsey Webster. Each movement bringing out the different strengths of both Webster’s instrument and the arranging and compositional prowess of Webster and her husband and musical partner, Keith Slattery, on the opening of their fourth project together.

“Love Inside” opens with a bright, yet subtle, head bobbing jazz swing that evokes childhood memories of skipping rope on a sidewalk in summer, nailing each beat beneath your feet like a metronome. Evolving as it moves, the song then teases with a chorus of close, 1940s Andrews Sisters’ harmony that only adds to the bubbly feel of a song that is as playful as it is elegant. At the bridge, Mike DeMicco’s agile guitar solo sits nicely in a cut that gives him the time and room for a beautiful expression. Just when you think the song is over, it drops the percussion for a second bridge and becomes an ocean of layered voices in counterpoint, with DeMicco’s guitar providing the lightest of touches, when the rhythm section returns with strings and Webster adds even more vocal counterpoint to the mix before closing out in another transition of shockingly stratospheric notes. The song is as chic, fun, effortless, and a bit of a showoff as the smooth soul and jazz catalog Webster has gifted us to-date.

On her fourth outing, Webster continues illustrating a consistent devotion to the smooth R&B and soul traditions that helped make artists like Anita Baker, Phyllis Hyman, Angela Bofill, and Angela Winbush urban adult contemporary staples in households across Black America throughout the 1980s and into the early ‘90s. Like blue-eyed soul chanteuse Teena Marie, Webster borrows from these Black American Music traditions without supplanting or mimicking them in ways that feel artificial, forced, or even overly reverential. While there is undeniably something familiar about the soulful feel and influenced essence of Webster’s unusually consistent projects, the original material and sound usually manage to be wholly her and Slattery’s own distinct brand. Songs like “A Love Before,” “Bad Grammar,” “Opportunity,” and “Don’t Give Up On Me,” with their casually delivered melodies and memorable hooks, are ready-made singles, albeit for a generation that remembers when singles didn’t have to bore or offend to make the grade. The spacious, but prominent soul jazz musicianship and reverb rich vocal productions are engineered to glide listeners ears into a peaceful state of transcendent auditory bliss in ways few outside of talents like Maysa Leak and Lalah Hathaway still attempt.

Charged by this critic with holding back a bit on her commercial smash, Back To Your Heart, Webster goes harder this go ‘round, continuing to surprise vocally in the most delightful corners of Love Inside. The jazz funk of the harmonically gifted and politically timely pro-immigration cut, “Free To Be (featuring Norman Brown),” spotlighting Lance Comer’s killer drums, begs to be heard live as the warm-up jam that gets the audience up and on their feet in concert, especially when the song modulates and pushes Webster as a singer to ever higher, emotionally righteous heights. On the hook of the rhapsodic “Dream,” inspired by Dr. Martin Luther King’s 1963 speech, Webster takes the chorus up an octave and lovingly sustains each caressed note not once, but throughout the deceptively difficult tune. The closing of “Love Inside” suddenly finds Webster’s voice in aria clouds just when you think the tune is going to gently ebb into a fade out. On songs that work brilliantly and those that don’t, Webster makes it clear she has the range and the chops as a songstress to rival any of her contemporaries.

That’s not to say that Love Inside always nails every mark. The vaguely Latin-tinged “One Last Time” is exquisitely performed, but neither the lyric or arrangement felt as fresh or even original as the best of Love Inside. The 1:40 “Even If He Lied” opens with a piano solo that will feel familiar to Brian McKnight fans of “Anytime” before the chords give way to something more distinctly Slattery and Webster, with minor key accents to boot, but it’s too short a tune to impact and leaves the listener feeling that the song is unfinished and ultimately unsatisfying. The sparkle of Keith Slattery’s twinkling ivories and some crisp arrangement accents popping up on the lyrically cliché “Walk Away” keep the song from being too derivative and expected. While none of these weaker cuts are anything less than sheened in vocal and production, trimming a few of the cuts toward the latter end of the project would have made for a tighter set just as ear fatigue begins to settle in on the consistent lush atmospherics that dominate the set.

One would-be smash that does not need to go anywhere is presented at the very end of the set, encouraging listeners to soldier through the latter few to arrive to this must-experience final destination. Along with the standout “Free To Be Me,” the simple yet unrelentingly melodic “By My Side” is perhaps the most energized of Love Inside. With an outstanding pop lyric that grabs you from the first bar and doesn’t release you until the groovetastic ride is done, it is one you can’t wait to ride the ride all over again. As with “Free To Be Me,” musicians are at their peak performance here, with DeMicco’s guitar (again) and Marcus Finnie’s drums deserving a standing ovation all their own. “By My Side” provides the kind of easy, sentimental lyric that one could easily see audience members singing along with Webster or crooning to that sweet love that makes their heart beat. Like Webster’s four-week, #1 Contemporary Jazz hit, “Fool Me Once,” “By My Side” has the kind of rare alchemistic ingredients that can make Lindsey Webster the UAC and contemporary jazz star her talents more than suggest she has the quality to be.

With nary one forgettable album to-date, Webster’s creative run at the top of her game is one to continue to watch, celebrate and, most of all, enjoy. Highly Recommended.