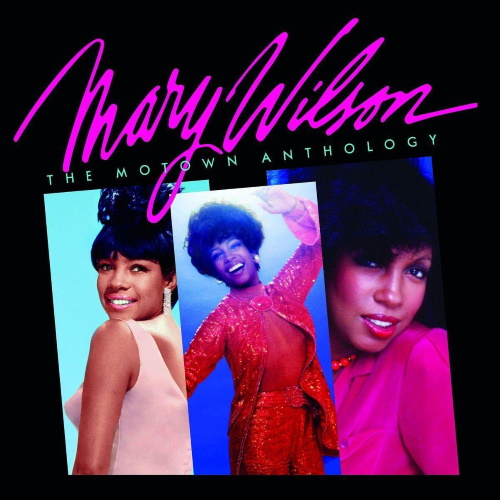 Click on CD cover
to listen or purchase
https://amzn.to/3H7qCI6

The sudden passing of Mary Wilson in 2021 left a hole in the hearts of many music fans and industry professionals alike. While she never achieved the household name status of fellow Supreme Diana Ross, she came admirably close for someone who was primarily relegated to a backing role during the group’s hit run throughout the 1960s. Reissue label Real Gone Music, in conjunction with Motown and Universal Music, has assembled a long-overdue two-disc collection entitled The Motown Anthology. It brings together her solo recordings and choice Supreme cuts featuring her distinctive lead vocals.

The sudden passing of Mary Wilson in 2021 left a hole in the hearts of many music fans and industry professionals alike. While she never achieved the household name status of fellow Supreme Diana Ross, she came admirably close for someone who was primarily relegated to a backing role during the group’s hit run throughout the 1960s. Reissue label Real Gone Music, in conjunction with Motown and Universal Music, has assembled a long-overdue two-disc collection entitled The Motown Anthology. It brings together her solo recordings and choice Supreme cuts featuring her distinctive lead vocals.

Ross is the signature voice associated with most of The Supremes’ biggest hits. For nearly a decade after she departed the group, however, Wilson kept the group’s torch lit through a number of personnel changes and business struggles. Although the hits were not as consistent, the musical output was impressively wide-ranging, stylistically and vocally—with Wilson finally getting the opportunity to demonstrate her delivery prowess on both ballads and uptempo joints.

The Motown Anthology, in fact, spans over 60 years, beginning with a recording by The Primettes (the first incarnation of The Supremes) from 1959 and closing with Wilson’s last release, 2021’s “Why Can’t We All Get Along.” The bulk of material, however, spans 1964 to 1980, highlighting album cuts and unreleased tracks from both Ross-era and post-Ross Supremes and including her 1979 solo LP and several cuts recorded shortly thereafter.

The endearing enthusiasm of Wilson’s approach shines through immediately on The Primettes’ “Pretty Baby,” while we hear her perfect her craft on a mellow rendition of Ruby & The Romantics’ “Our Day Will Come,” a live 1970 performance of Frankie Valli’s “Can’t Take My Eyes off You,” and a previously unreleased 1969 take on Dusty Springfield’s “Son of a Preacher Man.” Further, significant Supremes ‘70s hits like “Floy Joy” and “Automatically Sunshine” find her memorably sharing the spotlight with then-primary lead vocalist Jean Terrell. After the latter left the fold in 1973, Wilson began leading a larger amount of album tracks. A number of ballads showcasing her soft and alluring side are presented here, with 1976’s “You Are the Heart of Me” being the standout. Additionally, 1975’s “Early Morning Love” and the richly textured “You’re What’s Missing in My Life” are fine examples of her well-balanced execution of tenderness and fire.

Notably, the majority of these selections are previously unreleased alternate versions with vocal takes differing from the better-known recordings. Detailed session dates and info are provided for most tracks in the accompanying booklet, although recording information was unavailable for the recently uncovered Deke Richards productions “Send Him to Me” and “If You Let Me Baby.” Perhaps most intriguing is the cover of Everything Is Everything’s “Witchi Tai To.” Employing a deep and alluring tone supported by an unidentified male vocalist or two, Wilson brings a breathy resonance to the Native American chants which had made the number a unique pop chart entry in 1968.

The second disc of The Motown Anthology contains the complete Mary Wilson album from 1979, as well as four tunes slated for her never-completed follow-up. Although the self-titled LP was reissued digitally last year, Real Gone Music was wise in including it as part of its larger, wide-spanning collection. Wilson put her all into the set’s seven tracks; but the underlying material was, for the most part, unmemorable. The order of the day seemed to be quasi-showtunes-meets-disco. Even with Hal Davis at the production helm, Art Wright’s arrangements somehow missed the mark—leaving Wilson to find a way to give her all through a sea of second-rate lyrics and melodies.

Unsurprisingly, the release of Mary Wilson was a result of a legal battle with Motown, which quickly dropped the singer from its roster after the album failed commercially. We’ll never know if the much more well-rounded batch of unreleased tunes produced by Gus Dudgeon would have set Wilson on a solid solo path. Eschewing generic disco tendencies, the poetic pop-soul flair of “Save Me,” a feisty cover of John Fogerty’s “Green River,” and the enchanting ballad “You Danced My Heart Around the Stars” allowed her well-tuned vocal dynamics to flow far more naturally.

Last year’s “Why Can’t We All Get Along,” completed shortly before Wilson’s death, rounds out The Motown Anthology, along with an updated remix of 1979’s “Red Hot” by Eric Kupper that’s in some ways stronger than the original mix. While Wilson had continued to record sporadically through the ‘80s, ‘90s, and 2000s, those efforts were generally one-off projects for small labels. Thus, the Richard Davis/Angelo Bond-penned “Get Along” was to be her reintroduction as a solo artist. Fittingly, the reflective ballad blends nostalgia and social consciousness with a markedly confident vocal that easily outshines the schmaltz of the repertoire found on Ross’ recent Thank You.

With so many years of touring and keeping The Supremes’ legacy alive (most recently with 2019’s stunning book, Supreme Glamour) to her credit, The Motown Anthology will serve as a long-awaited treasure for Wilson’s legions of dedicated fans—as well as a valuable history lesson for younger listeners seeking a more complete understanding of the group beyond the star power of Ross. Wilson’s prolific advocating for artists’ rights, coupled with her own shining body of work (often undermined by behind-the-scenes drama) will ensure her place in the history of pop and soul history.

Ross may have tried to diminish Wilson’s impact with continued snubs and a glaringly unmoved tweet upon her death. However, the wealth of personal remembrances from colleagues and admirers in the Anthology’s accompanying booklet (among them, Hillary Rodham Clinton and Sir Paul McCartney) serves as a moving salutation to her importance in not only The Supremes’ story, but as a distinguished artist in her own right. The Motown Anthology is a comprehensive physical and sonic preservation of her musical force. Highly recommended.