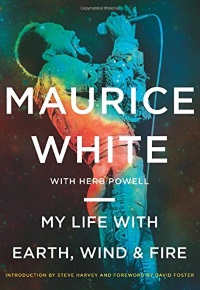 Earth, Wind & Fire’s impact on the evolution of R&B music during the 1970s—extending far beyond that most revolutionary decade—is one of striking magnitude. The band’s consciousness-raising lyrics, multicultural instrumental influences, dynamic vocal performances, and expansive melodic and harmonic qualities are but the tip of the iceberg. The mind-blowing experience of their live shows was an unprecedented experience. On so many levels, the across-the-board appeal of EW&F’s songs, recordings, and concerts blazed new trails for African-Americans striving to break out of age-old stereotypes perpetuated by closed-minded industry types. The international, multi-ethnic reach which Maurice White and his musical partners achieved over 20-some years was a power so inherent that it often is taken for granted in an era in which different styles and genres are more freely explored by independent artists not constrained by the mandates of major labels.

In My Life with Earth, Wind & Fire, an indelibly thoughtful and penetrating memoir written over the last five years of his time on this plane, White conveys with sincerity and depth his journey from a financially strained childhood in the segregated south to a professional career in the music business which ultimately allowed him to overcome his innate shyness, fight against racial injustices, and write, produce, and deliver some of the most seminal popular songs of the 20th century alongside both his musical heroes and prodigious contemporaries. Bullied on the regular by schoolmates for his yellow-hued skin tone, the future bandleader and visionary picked up on the transformative qualities of spirituality early on in his Memphis youth, while gleaning firsthand the value of determination and hard work from Elvira Robinson, a friend of his birth mother’s who singlehandedly raised White from the age of four until his high school graduation.

White describes with fresh enthusiasm the blossoming of his musical prowess alongside another future multifaceted wonder of song, Booker T. Jones, and the affirming place in his life it grew to be as he endured circumstances that could have well sent him in another direction in life: working on cotton fields several months out of the year from an early age; being randomly and mercilessly beaten by white cops when he was 16; and becoming provider for himself and his adopted mother when a deterioration in her health prevented her from working. He relates with unfiltered honesty the emotional and practical crossroads he faced when eventually deciding to move to Chicago to live with his birth mother and her husband (his birth father passed years earlier), shortly thereafter entering college to study medicine before realizing the great desire to create music that he was supressing in the process.

The bulk of My Life with Earth, Wind & Fire, however, offers an in-depth narrative of the two decades over which White elevated the band from a struggling act vying for just promotional treatment at Warner Bros. Records to a multi-million-selling supergroup at Columbia breaking through unchartered crossover territory on the charts and building remarkably integrated audiences in arenas throughout the world. The resonating theme amidst each album, each tour, and each business consideration detailed in the volume’s 360 pages is one of clear-eyed leadership and mental, physical and emotional balance allowing for the electrifying stage shows and unfailingly consistent studio albums that EW&F gifted to fans year after year. White was unwavering in eschewing preconceived notions of black men in society and black groups in mainstream music. His embracing of ancient philosophies and open explorations of multiple faiths formed the nucleus of the timeless lyrics so prevalent on staple albums like Open Our Eyes, Gratitude, and I Am.

White’s discussion of band tensions that frequently entered the picture over his colorblind philosophy when it came to supporting musicians, producers, and magicians is especially revelatory. As he chronicles both the backlash that he encountered from fellow African-Americans and the indifference the band experienced from the big white suits, what stands out is his constant vision of the whole picture—an awareness of fighting the good fight and not backing down, without becoming immersed in bitterness or self-victimization. Similarly, his frank conversation about his leadership style and personal priorities in the midst of massive popularity is sobering and compelling. Just as candid in tone are his revelations about the shortcomings he exhibited with women and children in his life as a result of an all-encompassing commitment to his art and work.

Most of the post-EW&F era White covers in the book centers on his coming to terms with the realities of Parkinson’s disease: the initial denial; a subsequent period of continuing to produce music and enjoy leisurely activities in spite of the disease’s physical effects; and the eventual major life changes he had to make resulting from devastating limitations which prevented him from continuing to be active in music. While he doesn’t go into a flurry of day-to-day details (as he states several times within, he was at heart a very private man who preferred to deal with individual challenges out of the public eye), he and co-author Herb Powell effectively paint a picture of a man who was amazingly able to apply his longstanding philosophy for his musical career to his own struggles in the 15 years following his final performance.

While it is ultimately quite tragic that he couldn’t enjoy the bulk of his well-earned retirement without the disabling and invalidating forces of Parkinson’s, it is unmistakably awe-inspiring and uplifting just how far he took himself—and others—in life personally, professionally, and creatively by utilizing the fundamental lessons instilled in him from an early age and the steadfast devotion to principles in which he so firmly believed. My Life with Earth, Wind & Fire is a uniquely equitable and richly insightful read which adds fruitfully to White’s powerful legacy. Highly recommended.