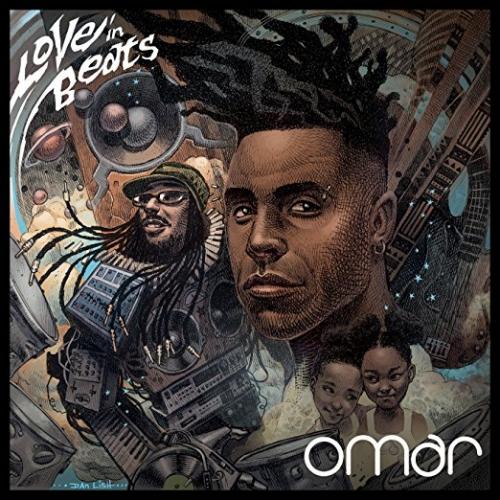 Strong family ties can certainly extend beyond the home, especially when musical gifts run through their blood. In a career that is leaning towards thirty years producing unique beats and soulful delights influenced by Stevie Wonder, Angie Scott and others, Omar (last name Lye-Fook) has been blessed to work alongside two particular family members whose contributions played a significant role in the industry: The fine art of rhythmic skills flows naturally through Omar's father, Byron Lye-Fook, who graced studio sessions as a drummer for reggae great Bob Marley and Horace Andy. However, the major props belong to Omar's younger sibling, turntable wizard Roland (AKA Scratch Professor) Lye-Fook.  Through Omar’s distinguished career, it's that resounding brotherly love and respect shared between Omar and Scratch Professor that has been reflected in several memorable performances, recorded and live, including the explosive Omar's Boiler Room Live Show (which can be seen on You Tube).

From his single and debut album in 1990, “There's Nothing Like This” (originally released via his father’s Kongo Records) to Top 40 U.K. hits “Golden Brown” and “Say Nothing,” Omar always keeps grooves and his special brand of British neo-soul at the forefront of his music, but manages to mix those infectious elements with funk, jazz, Latin, cinematic, world music and Motown. And now, joined by Scratch Professor in the co-production chair, Omar has created Love in Beats, a sonic adventure that encompasses many of his diverse tastes. No stranger to collaborations, Omar enlists an international lineup of supporting players which further enhance his vision of rhythmically induced melodies.

"Vicky’s Tune" is filled with electro-Caribbean beats in a pool of swirling keyboards, flutes and a percussive attack, capped off by an equally percussive solo from jazz pianist Robert Glaspar. The carnival like pulses of the Caribbean anchor "Destiny," featuring Guadeloupe native vocalist Jean Michele Rotin, shapes into several engaging breaks over the second half with a string quartet and hand percussion.

Alongside the island goods, Love in Beats provides several doses of the Latin kick. The tango-induced "De Ja Vu" reels in plenty of romance by Cape Verdean-born vocalist Mayra Andrade, frosted with a soft flamingo guitar. The rumba beats of "I Want It To Be" bounce between a sea of ambient keyboards, flutes, harp and hand drum driven choruses.  The enticing cha-cha-cha with its staccato brass section and flourishing piano sets the foundation for "Doobie Doobie Doo."  Besides the international influences, Love in Beats expands upon other avenues that are just as engaging.

Natasha Watts injects lots sass and power for the easy going funk of "Insatiable," concluding with the emphatic chants of “We’ve got something special.”  Motown receives its due with "Gave My Heart/It’s So Interlood," featuring songwriting legend Leon Ware (who appeared on Omar's For Pleasure), locking into a retro seventies neo-soul sophisticated package with strings and harp. Hip hop, spoken word and eighties R&B collide for "Feeds My Mind," as The Floacist contributes a gentle expression of romantic desire: “I read your palms with your eyes/I hear your truth through your eyes/And you see me so well/Enjoying your spell.”  Then Scratch Professor cuts and scratches on the experimental, "This Way That Way," with baritone sax and hypnotizing turntable strokes that captures a relationship heading in a topsy-turvy direction.  Switching to a mellower frame of mind, "Grey Clouds" is enriched with a touch of movie soundtracks in the majestic orchestral choruses and string drips.

Most everything clicks throughout Love in Beats, from the production to the musical content.  Only the mildly entertaining "Girl Talk," featuring the freestyle ramblings of Monteane Lye-Fook and the semi-stale beats, lacks the intrigue of the aforementioned.  Otherwise, it is evident that Love in Beats spreads a contagious brotherly musical connection that only Omar and Scratch Professor could forever share. Solidly Recommended.