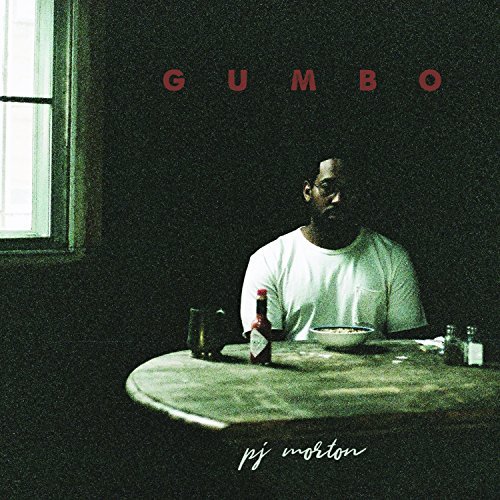 Some may view the title of PJ Morton’s fourth full-length solo album as indicating a work that will try its hands at a lot of different genres and music styles, especially given the studied, capable musician Morton has proven to be over the years as both a soloist and with the powerhouse Maroon 5. While Morton does blend different sub-genres of R&B/Soul on Gumbo, to describe this rich new dish as a gumbo may be overstating an album that is more of a sweet and sour platter of lyric contrasts and emotional conflict than an epic of diverse musical sounds. A demonstrated acolyte of Stevie Wonder on prior cuts like “Walk Alone,” on Gumbo Morton’s usually more minimalist approach to Wonder here goes full Music of My Mind and Innervisions in both its thicker sound palate and introspective musings. The result is perhaps Morton’s most grown and fulfilling in years, even as it fails to consistently meet its own high bar in its thematic ambitions.

Gumbo is a deeply personal, reflective, and sometimes interrogating work that is layered in what is overtly expressed as façade and in what are more subtle messages hinting at an artist that is sometimes unsettled, frustrated, and struggling, if only between the lines. In “Claustrophobic (feat. Pell),” PJ Morton boastfully confesses being both bigger than the racial stereotypes foisted upon him and the limiting boxes he’s encouraged to fit in. But, he also intimates through Pell’s weary rap the challenge of loving where you’re from—in this instance New Orleans—while also resenting the expectation that you would personally reflect the branding of your starting grounds. Given that presumably unfinished conflict, it’s interesting that Morton has chosen to name his project after the dish for which his home is best known, an act of proud claiming even as he sings about his lack of neat fit in his home’s legend.

Interior conflicts continue with “First Began,” a devotional ballad to his partner that declares a desire to fall in love with her again in the afterlife. Yet, in so many words, the song also reveals a nostalgic yearning for how they were when they “first began” over whatever’s happening between them now. On “Religion,” the preacher’s kid of the legendary Bishop Paul S. Morton, Sr., Morton both reflects his Evangelical religious upbringing in his abundant views on love, but also distances himself from some under that “big tent” by directly questioning religious conservatives that could find value in a candidate like Trump or see God in the terrorist acts of 9/11 (and perhaps the violent acts done in response under the jingoistic auspices of “God and country”). Ying and yang inspirations, “Alright” and “Everything’s Going To Be Alright (featuring B.J. the Chicago Kid and the Hamiltones),” both encourage. Still, the former seems to be trying to convince itself through pleas to God and lines reminding the subject that “we’ve been here before/you can check the score” while the latter is more self-assured to the point of being almost celebratory in its confidence. These twins serve as a nice companion to the fighter’s anthem of “Sticking To My Guns,” a full-on junkyard funk that alludes to Morton’s angst about not being around to realize his full potential while still adamantly, even defiantly declaring that Morton will “stick to my guns until my work is done.”

With such ambitious major themes maturely anchoring Gumbo, some of the subjects approached almost seem beneath Morton’s lyrical microscope. Songs about not checking his girl’s phone to avoid knowledge of possible infidelities (“Go Thru Your Phone”) and even the resentful “They Gon’ Wanna Come” about those unbelievers who don’t ride with you through the war to win but want to take advantage of its spoils are both well-performed and even thoughtfully considered, but feel out of step with the rest of the project in their lack of lyrical intricacy in theme and subtext.

While Morton’s hip hop soul take of the Bee Gees oft-covered classic, “How Deep Is Your Love,” fits Gumbo’s prevailing ambiguity of declaring one thing while a river of belying doubt is heard running underneath, listeners’ receivership of the cut will depend on how well they believe Morton’s reimagined arrangement of percussive swagger and harmonic imagination. It ends an all-too-brief project that leaves listeners desirous of a second helping of the compelling humanism Morton is serving, one that may not fully qualify as a musical gumbo, but whose spoonfuls certainly boasts a complex enough palate when optimally seasoned. Highly Recommended.