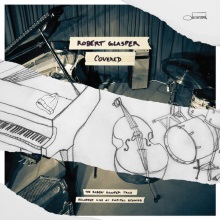 Click on CD cover
to listen or purchase
https://www.amazon.com/Covered-Glasper-Recorded-Capitol-Studios/dp/B00V5J1KBI/ref=as_sl_pc_tf_til?tag=soultracks-20&linkCode=w00&linkId=W44774VWKFOFIYH5&creativeASIN=B00V5J1KBI
…

It is the most soothing and, at times, feels the most personal of Robert Glasper’s recent output. The project returns Glasper to the kind of music that made his name in the jazz circles, before the Grammy-winning Black Radio Vol. 1 and 2 projects made him better known among the mainstream. As an album heavy with jazz takes of contemporary R&B cover tunes, it doesn’t completely abdicate the modern or the radio ready, but it nicely bridges the two worlds of Glasper and brings his audiences together for this project. Hits by artists like Musiq and Jhene Aiko sit rather comfortably with jazz standards like “Stella By Starlight” in Glasper’s capable hands. In his presentation, there needn’t be a separation of the past and present, no requirement that a jazz musician choose one over the other and still be taken seriously as a purist. Recorded Live at Capitol Studios with an audience, where many of the American music greats made some of their most seminal pop and jazz albums, with the new disc Covered Robert Glasper and his band of merry men may have just made one of their own.

The project is done simply with piano, percussion, and bass, so Glasper stands out in ways that he laid back on the Black Radio projects, and it’s nice to experience a front and center Glasper again. We get to hear him regularly enough as a sideman on projects by such artists as Bilal, Kendrick Lamar, and Taylor McFerrin, so we need not hear him play that role on his own projects, as it sometimes felt with Black Radio. Bassist Vicente Archer and drummer Damion Reid all bring quality and polish to the project, but it’s Glasper’s keys that get the spotlight treatment we’ve been recently missing. On an elegant and emotionally tense ride like Bilal’s “Levels” or the intricate and smoldering vision of Aiko’s “The Worst,” one can hear Glasper’s mastery at work and how he broke through as someone to hear when so very many other young jazz musicians have not. His passion and politics converge sweetly and devastatingly on his riff of Kendrick Lamar’s “I’m Dying of Thirst,” where children speak the names of black people murdered at the hands of the state over a more casual, yet somberly present Glasper. A homage to the life of artist/activist Harry Belafonte on his own testifying “Got Over,” together with the Lamar cover, also feels timely and necessary as a bit of intergenerational discourse in an age of Black Lives Matter and the emerging New Civil Rights Movement.

Glasper’s original sidemen, Archer and Reid, hold up nicely, and given Glasper’s more recent brilliant work with bassist Derrick Hodge and drummer Mark Colenburg following the original trio’s mid-2000s run, that’s no small feat. On cuts like “Barangrill” and Musiq’s romantic indulgence, “So Beautiful,” this trio fills all the spaces and creates movement when movement is required and a searing silence when that is what is needed too; at no point are you missing other instruments. These three men and their gifts are enough.

That’s not to say this is a flawless album. As relaxed and beautifully detailed on the accent marks as Covered can be, there are a couple of squint inducers. On John Legend’s “Good Morning” there is a whiff of Muzak in the overall feel until you get to the bridgework. You sometimes wish Glasper had taken more arrangement risks there, as he did with “So Beautiful,” since the trouble here lies in the original composition more than this improvisational take. Legend’s tune just doesn’t transition as neatly into jazz, not when the original already struggled not to evoke a Maxwell House commercial. Radiohead’s limp-wristed “Reckoner” similarly suffers from its genre hop transition.

If there is a critique some may have with the project, it is that Covered may be too smooth and chill for some listeners, too contemplative an exercise, as there is very little overt swing and up-tempo avant-garde experimentation on this project. With the possible exceptions of “Stella By Starlight” and “In Case You Forgot,” which include a surprising interpolation of Cyndi Lauper’s “Time After Time,” there are few double take or toe-tapping moments. Even then the Lauper elements are used ironically, with Glasper poking fun at it in some ways. On the upside, the cut does give bassist Vicente Archer a solo opportunity to stretch. The closing interpolation of Jill Scott’s “You Got Me” on the cover “I Don’t Even Care” from Black Radio works better, feeling inspired and giving insight into how Glasper’s artistic mind works.

For those who came to Glasper during his early Blue Note albums, Canvas and In My Element, Covered will be a welcome return, but not so much that it alienates those more R&B and soul fans who came to Glasper by way of Black Radio. Now that he’s captured the attention of both audiences as part of what we suspect is his master blueprint at world domination, it’ll be compelling to see what new boundary-breaking worlds he hand holds both groups into now. In Robert Glasper’s artistic consistency and strategic maneuvering to bring young audiences to jazz, he has rightly earned our trust, something very few young or old jazz artists can boast. How he keeps and rewards us for that trust will be interesting to experience and, hopefully, as enjoyable as Covered. Highly Recommended.