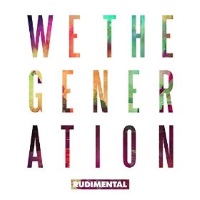 Click on CD cover
to listen or purchase
https://www.amazon.com/We-The-Generation-Deluxe-Edition/dp/B00XZFWNAM/ref=as_sl_pc_tf_til?tag=soultracks-20&linkCode=w00&linkId=M3XANJC4XHKJB3AG&creativeASIN=B00XZFWNAM

To be over the age of 35 or so and witness the resurgence of dance music and all the fashions and culture that characterized the 1990s, now presented with even more color, textures, and form-fitting clothing can be alternate between disquieting to curiously complimentary. High top fades, crazy large square glasses, and throbbing, repetitive music that made you sweat soak your clothing on the dance floor in a trancelike state. Yes, we’ve seen this film before. Of course, you swear it was better when you and your peers were in it as the stars, instead of sitting in the audience watching a Bizarro Universe repeat of the phenomenon like a bad acid trip, or rather, microdots back in our day.

To be over the age of 35 or so and witness the resurgence of dance music and all the fashions and culture that characterized the 1990s, now presented with even more color, textures, and form-fitting clothing can be alternate between disquieting to curiously complimentary. High top fades, crazy large square glasses, and throbbing, repetitive music that made you sweat soak your clothing on the dance floor in a trancelike state. Yes, we’ve seen this film before. Of course, you swear it was better when you and your peers were in it as the stars, instead of sitting in the audience watching a Bizarro Universe repeat of the phenomenon like a bad acid trip, or rather, microdots back in our day.

So, it’s hard to know at times whether you’re being hyper critical about it all because your time has past to get away with such youthful indiscretions as brightly colored polka dots and structural hair and all that means. Or, is it really not as good this go-‘round? This is what it feels like to listen to the UK drum ‘n’ bass band, Rudimental, in its declarative generational statement, We The Generation. This breathless declaration is set to endlessly looped funk, house, EDM, techno, and, of course, drum ‘n’ bass beats. Or rather what it is like to listen to it at 40.

Largely, the sophomore project’s featured vocalists are equally young and breathless, serious artists under 30 who have a lot of international heat on them, including: MNEK, Spee, Mahalia, Ella Eyre, Anne-Marie, Ed Sheeran, Lianne La Havas, and Sinead Harnett. Some bones to the elders are thrown in the form of singer Foy Vance, reggae stars Earl 16 and Max Romeo, and soul legend Bobby Womack in one of his posthumously released recordings. For their part, the older artists hold up well enough on some of the project’s more spacey and abstract compositions that seem to want to swallow them whole, like “System,” which incorporates elements of Afrobeat and reggae into its electronica stew. One gets the sense there’s some rage against the machine message embedded in its cultural explorations, but it gets lost in all the astral highs and echoed accents.

Meanwhile, a wailing Bobby Womack is thrown into something that feels vaguely funky and keeps telling us “there’s a new day coming,” but despite all its promises (warnings?) the deconstructed cut isn’t anywhere near as interesting as the unexpected material on the defiantly modern The Bravest Man in the Universe, Womack’s final album. You can’t help but feel he deserved better than “New Day Coming” as a swan song. A soaring-voiced Foy Vance fairs better with the tribal anthem “Never Let You Go” that transitions into something like a cinematic drum ‘n’ bass epic.

Of the younger bunch, you can tell that Rudimental has their favorites. Some artists such as the critically acclaimed Lianne La Havas and the muscular-voiced Will Heard are being set-up for even bigger stages by being presented several times throughout We The Generation. Some like Ed Sheeran are already stars of note who need no help, but wouldn’t mind scoring a hit by one of the hottest producing teams coming out of the UK today. For Will Heard’s part, a bluesy rocker in tone and timbre, his yells and cries give an emotional center to Rudimental’s heavy-handed productions, especially on the panoramic “Run” and the power ballad turned drum ‘n’ bass melodrama, “I Will For Love.” Unlike Sheeran’s generic pop delivery on serviceable cuts like “Bloodstream” and formula hits in the making like “Lay It All On Me,” Heard’s guest spots resonate a bit more thanks to his all-in vocal risk taking that match the giant soundscapes he’s charged with singing against. With gorgeous and instantly believable pairings like his and Sinead Hartnett’s on the delightfully fresh mid-tempo ballad, “Treading On Water,” Heard may come off best of all on a club project dogged by unevenness.

For her part, we’ve come to expect great things from La Havas, but she has to be given great things to do to be great. The roller-skating, ‘80s funk of “Breathe” feels derivative rather than homage-paying in a way that frustrates because its familiar elements of Chic guitar licks, horn riffs, and four on the floor stomps repeatedly come close to being that Gap Band “Uptown Funk” hotness, but fall short of fully recreating a classic groove. Even the admittedly engaging protest of its hook “let’s do it for our people” doesn’t sell it on early listens, though it has potential to grow on listeners over time. The unmemorable urban alternative production of “Needn’t Speak,” La Havas’ second outing on this Rudimental affair, just feels out of place on a project of such verve and bombast, like a flat B-side track from one her own projects that were tossed on here just to see if it would stick. The producers’ effort to jazz it up with a tacked on drum ‘n’ bass effect near its end does little to help, since by then we’ve already fast forwarded to the next track.

A confident and competent Anne-Marie, who apparently tours with Rudimental, gets three guest spots, including “Rumor Mill,” a duet with Heard that is pure ‘90s house and one of the joys of the album (we see you, Will Heard). Despite having the feel of a cut that might have been on Prince’s Pop Life, the synthy, introspection that is “Foreign World” still doesn’t quite match-up to Anne-Marie’s more ear pleasing match-up with Heard. Nor does that other world come close to the driving extravaganza that is “Love Is Just A Word (featuring an outstanding Dizzee Rascal)” one of the better melding of reggae, pop, and drum ‘n’ bass delivered here.

The surprises continue as both the generally reliable MNEK and Ella Eyre also crash and burn on danceable pop songs that run really hard, but get nowhere fast. It’s not entirely either talent’s fault; there’s a lot happening on every attention-deficit song presented by Rudimental on their clear battle to avoid a sophomore jinx. The kitchen sink can be found somewhere in the corner of one of these tracks. Overall, there’s enough that’s good in their party mixtape to keep this modernized retro party jumping, but every once in awhile you hear someone bump the DJ table and ruin the mood, or you hear the collective groan of the room because the DJ is trying too hard to make a song happen that no one but him wants to hear -- like We The Generation’s overwrought title track (Sorry, Mahalia). Rudimental’s second hosting is not the kind of party I’d necessarily want to be invited to, having already been long ago in a galaxy far, far away, but I can understand why others might be lining up to go. Mildly Recommended.

Editor's Note: This review was of the Deluxe Edition of the project.