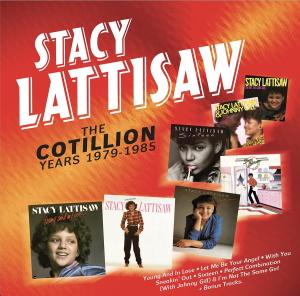 During her childhood, Washington, DC native Stacy Lattisaw recorded seven albums that brightly displayed a soulful interpreter of song whose emotion and delivery belied her age. Whether covering classic R&B ballads or performing funky uptempo fare, the shy youngster came to life and gave her all in the more than 50 tunes she released from the late 1970s through the mid-‘80s. These gems comprise Robinsongs’ new seven-disc box set, The Cotillion Years: 1979-1985.

During her childhood, Washington, DC native Stacy Lattisaw recorded seven albums that brightly displayed a soulful interpreter of song whose emotion and delivery belied her age. Whether covering classic R&B ballads or performing funky uptempo fare, the shy youngster came to life and gave her all in the more than 50 tunes she released from the late 1970s through the mid-‘80s. These gems comprise Robinsongs’ new seven-disc box set, The Cotillion Years: 1979-1985.

When Lattisaw took over airwaves and dance floors in 1980 with the seepingly anthemic “Dynamite!” in 1980, she’d already experienced performing on large stages and working in studios with several producers. Singer/drummer/songwriter Narada Michael Walden, who helmed the entire Let Me Be Your Angel LP (as well as her next four albums), established himself as a distinguished talent behind the boards while Lattisaw simultaneously built her credibility as a sophisticated vocal storyteller.

On “Dynamite!” and the follow-up ballad, “Let Me Be Your Angel,” the tonal colors and phrasing textures radiated by Lattisaw were at once notably unaffected and strikingly soul-stirring. Both tunes made the R&B top 10 and also made her the youngest artist to reach #1 on the US dance club charts.

If the nature of major labels had been as fickle in 1979 as it is today, the public at large might have never gotten the chance to discover her. It was June of that year when she released her debut album, Young and in Love—and it promptly bombed. The one and only single from Lattisaw’s first album was a sweetly soulful cover of Ruby & The Romantics’ 1964 nugget, “When You’re Young and in Love.” LP producer Van McCoy furnished her rendition with sweeping string and horn arrangements to complement her youthful vibrato, and he even constructed a shimmering disco version. The Cotillion Years box set marks the debut of Young and in Love on CD. In addition to the inclusion of the full-length club mix of the title cut, it’s a sheer pleasure to revel in the remaining tracks—which are a world removed in melodic and lyrical approach from subsequent Lattisaw albums.

Although the material on Young and in Love might not hold up as resoundingly as Let Me Be Your Angel, there is an innocent charm to entries such as the disco ditty “Spinning Top,” sweet “Three Wishes” and lighthearted remake of Petula Clark’s “Downtown” that is hard to resist. Lattisaw’s voice had not yet fully blossomed into the soul-searing force that would make her famous; it’s a treat to revisit this more rudimentary stage of her recording career with the CD premiere of the album in this set.

As Lattisaw’s voice quickly matured, Walden was able to surround her with a treasure trove of classy songs and top-shelf musicians, allowing her to stand out amongst her musical peers. Following the breakout success of Let Me Be Your Angel (which also included the ebullient “Jump to the Beat,” a major UK hit), she remained on a role with 1981’s With You, boasting her definitive cover of The Moments’ “Love on a Two Way Street.” Landing at #2 on the R&B chart, it’s a remarkable example of expanding upon an undisputable classic in a fashion which preserves the original integrity and elevates it musically. The follow-up singles “Feel My Love Tonight” and “It Was So Easy” didn’t come close in creating a similar commercial impact. It was a loss for audiences, however, as the latter number showcased yet another dimension of Lattisaw’s vocal pliability in an understated but funky (and slightly jazzy), pop-savvy setting.

Aside from her single releases, Lattisaw’s Cotillion albums were well-rounded entities, with cuts like the smooth and catchy mover “Screamin’ off the Top” and atmospheric “Spotlight” standing out on With You and the warmhearted slow-jam “Dreaming” and tight groover “You Know I Like It” making solid impressions on Let Me Be Your Angel.

1982’s Sneakin’ Out and 1983’s Sixteen each expanded considerably on Lattisaw’s scope of repertoire, although the singles chosen generally stuck to the more proven formula. Remakes of both Eddie Holman’s “Hey There Lonely Girl” and Gary Benson’s “Don’t Throw It All Away” were released from Sneakin’ Out, with the latter once again highlighting her prowess as a balladeer adept at conveying vulnerability, reflection, and strength beyond her years. Listening four decades later, it’s hard not to wonder how her career path might have broadened had selections such as the subtly sassy “Guys Like You (Give Love a Bad Name)” and the punchy title track been afforded single promotion.

Lattisaw opened for The Jacksons on their 1981 Triumph tour, and there are likely certain parallels that she experienced as a child artist experiencing large-scale success driven and supported by a major label. Cotillion provided her with the opportunity to record a breadth of impressive material, but largely played it safe with singles that played more to her youth than her versatility. Sixteen boasted a handful of cuts centered around the transition from girl to woman, but only the tamest numbers were promoted. There’s no denying the beauty of “Miracles”; but the charging rhythms and feisty vocal arrangements of “Black Pumps and Pink Lipstick” merged an R&B foundation with crossover appeal in a much fresher way. Likewise, “Million Dollar Babe” was radio-friendly, but not nearly as grabbing as the funk-infused “16.” (A single edit of the latter, released only in Germany at the time, is included as one of three bonus mixes on disc five of this box set.)

One anomaly in Lattisaw’s singles catalog from this period is “Attack of the Name Game,” an electro-tinged groove built around a rap exchange between her and Jeff Cohen (affected as a “martian voice” with the assistance of synth wizard Patrick Cowley). It remains a delightful listen, but its novel aspect didn’t widen her commercial reach as much as the aforementioned album cuts likely would have. While “Miracles” briefly returned her to the pop top 40, her reach on the R&B side was slipping, and Cotillion saw a window of opportunity by pairing her with fellow Washingtonian Johnny Gill—whom Lattisaw helped bring to the attention of the label—for an album of duets.

1984’s Perfect Combination brought Lattisaw back to the R&B top 10. Her glistening delivery paired with Gill’s gruffer tone made for an unlikely match, but one that worked well throughout the album. The title cut, ironically, was more youth-driven than the ballads she’d recorded at an earlier age. Once again, Cotillion took what seemed the most obvious route by following up with a rendition of The Shirelles’ “Baby It’s You.” Both parties turned in impressionable performances, but the jammin’ “Block Party” (which became the third single when “Baby It’s You” fell short) was much more musically fresh and vocally riveting. The remaining selections on Perfect Combination are representative of pop-laced contemporary R&B of the time. They might not stand out as much as earlier hits, but “Heartbreak Look” and “50/50 Love” are both appealing upbeat tracks which could have worked just as well as singles.

Lattisaw’s swan song for Cotillion, 1985’s I’m Not the Same Girl, perhaps elicits the most mixed range of reactions from fans out of all 10 albums she recorded during her decade in the business. At the time of its release, it came and went with nary a trace. Following five albums guided by Walden, the production reins were handed over completely to Michael Masser—resulting in a somewhat jolting stylistic shift. Masser, who’d composed hits for Diana Ross in the ‘70s and would go on to produce major smashes for Whitney Houston and Natalie Cole in the latter half of the ‘80s, didn’t even put his name to I’m Not the Same Girl—instead using the moniker “Prince Street Productions.” He brought to the table three compositions recorded earlier by Ross and Dionne Warwick and five new tunes which were more contemporary in nature.

I’m Not the Same Girl was startlingly brief, clocking in at just over 27 minutes total, and the combination of lovelorn piano/orchestra ballads with synth-driven pop-dance fare was a bit quirky. Still, there’s an unmistakable fullness of heart that Lattisaw was able to convey from beginning to end, whether it be the cheery “Can’t Stop Thinking about You,” the assertive title track, or the tender (and superlative) reading of Ross’ “I Thought It Took a Little Time.” The album was her first to totally miss the charts since Young and in Love, however, and in less than a year’s time, she released her first of three albums for Motown.

Lattisaw went on to score several significant R&B hits during the late ‘80s, but it’s her wealth of timeless R&B and alluring dabblings in pop that she made at Cotillion which comprise the core of her musical legacy. The Cotillion Years: 1979-1985 at last brings together each and every one of these recordings in one set that warrants a thorough initial listening and frequent revisiting. Highly recommended.