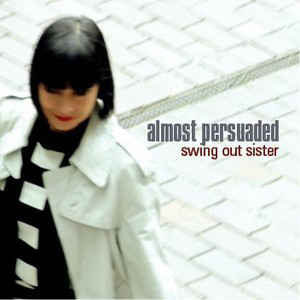 When Swing Out Sister rose to international stardom in 1987 with the jazzily nuanced pop-dance concoction that is the ever-happiness-inducing “Breakout,” the British trio subtly introduced mainstream radio listeners to a unique brand of top-40 savvy informed by underpinnings of soulful improvisation and sophisticated melodic structure. The 30 years since have seen the always mindful outfit (a duo since 1989) consistently juxtapose influences of jazz, exotica, funk, and pop in a fashion that is at once nostalgic and cutting-edge.

When Swing Out Sister rose to international stardom in 1987 with the jazzily nuanced pop-dance concoction that is the ever-happiness-inducing “Breakout,” the British trio subtly introduced mainstream radio listeners to a unique brand of top-40 savvy informed by underpinnings of soulful improvisation and sophisticated melodic structure. The 30 years since have seen the always mindful outfit (a duo since 1989) consistently juxtapose influences of jazz, exotica, funk, and pop in a fashion that is at once nostalgic and cutting-edge.

Almost Persuaded, Swing Out Sister’s eleventh studio album, continues the band’s commitment to authenticity and security in stylistic choices. Vocalist Corrine Drewery and keyboardist/bassist Andy Connell (both of whom penned and produced the album in its entirety) have remained relevant by resisting the temptation to bow to quick, attention-grabbing gimmicks, instead opting to infiltrate each new set with flavors that fill both the senses and intellect with solid emotion and truthful engagement. The duo has described Almost Persuaded as “cinematic soul jazz,” a widely spanning moniker which is admirably accurate in capturing the grand-yet-intimate mood that permeates the disc’s 12 tracks. Close your eyes, and it’s not difficult to imagine yourself sitting in a large movie theatre with soft beams of spotlight and a symphony playing for a small crowd of people gathered to watch classic foreign films.

“All in a Heartbeat” (Late Night Version) is a central cut which assimilates many of the rhythmic and harmonic components that make Almost Persuaded an enriching listening experience. Illustrious strings, rollicking piano riffs with bossa nova sensibility, quietly forceful twists and turns on the drums and percussive effects, and Drewery’s no-frills, laidback and amiable delivery—all in three minutes. Then there’s the placid funk beat of “Until Tomorrow Forgets,” surrounded by an ocean of glistening keys, delightfully accented backing vocals, and a striding bass line.

There are understated moments to be found, as in the reflective “Everybody’s Here,” an ode to memories in the face of present company. The blurred lines between the mental and physical states explored in the bittersweet tune are bolstered by Drewery’s firm, but sentimental, tone and Connell’s plaintive delayed attacks. In a more hopeful mode, “Something Deep in Your Heart” finds a possible silver lining amidst a plush mainframe of loungin’ piano and soulful drumming and groovy adornments of wah-wah guitar. “Good times’ll come and go whether you want to know, you won’t want to believe it…There’s joy, there’s pain that we’re through runnin’ from, that’s been and gone, and nothing comes between friends.” A message for the ages…stated without complication, sung with ease.

If it’s a middle ground one seeks, it’s found in the opening liners of cut one: “Don’t Give the Game Away.” Perhaps the most connected of all the selections to today’s sonic landscape—the sinewy melange of keyboards swirled around an alternatingly trippy and assertive beat—the striking number is likewise frank in its poetic stance. “Just because you’re almost there doesn’t mean you’re going to make it/Just because you think it’s all yours doesn’t mean that you can take it,” imparts Drewery at the outset. There’s a lot more where that came from, and she conveys it with an unassuming all-knowing, topped off at the close by dreamy flourishes of flute and trumpet that solidify SOS’s mastery of fusing live solos with modern technology.

“Happier Than Sunshine” might be the most familiar sounding of any of Almost Persuaded. Taking a cue or two from bits of 1992’s Get in Touch with Yourself and 2004’s Where Our Love Grows, the at-ease groover nonetheless changes things up with unexpected tempo diversions setting the flow for Drewery’s simply bold brew of charm, mellow and pure. It’s but one example of Swing Out Sister’s transcendent talent of weaving ongoing stories and progressions through the decades, one album at a time. “Other days, other lives disappear in my mind…other days, other times disappear out of sight,” Drewery sings shortly before the song’s unexpected conclusion. Oh, how those words ring true when taking in Almost Persuaded. Highly Recommended.