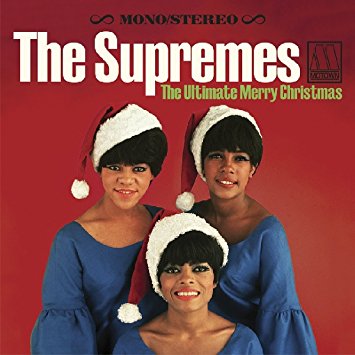 On the heels of Elvis Presley and The Beach Boys opening the pop-music market for Christmas songs during the late 1950s and early ‘60s, Diana Ross and The Supremes were one of the first prominent African-American acts in the secular world to release their own, full-fledged holiday album. James Brown and, later, the Jackson Five and the Temptations would follow suit; but several decades would pass before black artists were represented with anywhere near the regularity of Christmas LP’s as their white counterparts. 52 years on from the original release of The Supremes’ Merry Christmas, it’s a treasure to listen to the 12 recordings which comprised this landmark collection. Adorned with both stereo and mono mixes of all of the original tracks, Real Gone Music’s new two-disc reissue, The Ultimate Merry Christmas, also adds a newly mastered version chock full of alternate vocal takes to the giving tree. Furthermore, a dozen bonus recordings from the vaults make for the merriest of musical ornaments.

So many Christmas standards originated in the 1930’s, ’40’s, and ‘50s; thus, it’s a treat to hear Diana, Mary, and Florence sing gems such as “Silver Bells,” “The Little Drummer Boy,” and “Rudolph, the Red-Nosed Reindeer” without the influence of endless covers that have since surfaced. And then there’s the trio’s beloved adaptation of Rodgers & Hammerstein’s “My Favorite Things” (first made famous by Mary Martin in The Sound of Music), sweeping in its pairing of sterling orchestration with Ross’ brassy yet charming lead and Mary and Flo’s softly elegant harmonies.

Merry Christmas producer Harvey Fuqua kept the spirit uplifting on both the originals and traditional numbers, imbuing both “Joy to the World” and “The Little Drummer Boy” with engaging combinations of marching percussion and big, vibrant strings. Even the more solemn “Born of Mary” retains an upbeat pulse with colorful symphonic touches and choral-style arrangements (sung, in fact, by prominent Motown session group The Andantes). The 2017 mix offers Ross’ vocal sans most of  the unison lead support—creating a more reflective, understated atmosphere.

For Supremes enthusiasts who have cherished Merry Christmas through decades of holiday seasons, the fulfilling variety of hard-to-find jewels and previously unearthed nuggets on The Ultimate Merry Christmas will satisfy both heart and mind. Florence’s unaffected, effortless reading of “Silent Night,” which first surfaced in the late 1980s, is contained in full here. Meanwhile, a Mary Wilson take on “The Christmas Song,” is salvaged here, in part, to create a duet with Diana (whose solo version is also included). Additionally, Florence features on a gracefully powerful interpretation of “O Holy Night.”

On a somewhat jazzier note, “Just a Lonely Christmas,” composed by Fuqua and Alan Freed, finds Ross displaying a more sophisticated, less commercial tone than that employed on some other selections. The sentimental tune was first recorded by Fuqua’s legendary doo-wop group, The Moonglows, in 1953; Diana, Flo, and Mary gave it a slicker, but still charismatic, female spin complemented by lush touches of flute and xylophone. Finally, premiering for the first time ever on CD, a vivacious live recording of “My Favorite Things” from the ladies’ 1967 Copacabana show makes for an appropriately festive closer. All three sound relaxed and free-spirited in their cool phrasing and chic tones.

Packaged in a trifold case with a booklet containing vintage color and black and white photos of The Supremes, along with an informative historical essay by Joe Marchese and track-by-track annotation of the bonus material, The Ultimate Merry Christmas is an optimal holiday gift that inherently reminds listeners of the importance of musical celebration during the season of giving—and of its power to evoke joy from generation to generation. Highly recommended.