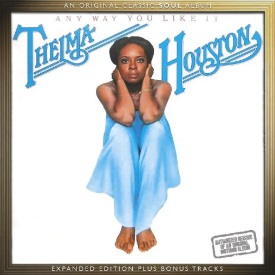 Click on CD cover
to listen or purchase
https://www.amazon.com/Any-Way-You-Like-It/dp/B00R317TBM/ref=as_sl_pc_tf_til?tag=soultracks-20&linkCode=w00&linkId=4YDZU7ZBTEODWJFA&creativeASIN=B00R317TBM

Amid discussions of classic 1970s soul, the names of any number of timeless female singers are inevitably brought up: Aretha, Chaka, Natalie, Diana and Stephanie…just to name a handful. Armed with vividly memorable material and consistent public exposure (read: promotion), each of these ladies were able to maximize their unique vocal prowess and repeatedly sculpt musical marvels into chart classics—forever assuring their slots in the pantheon of modern R&B. But these women have just as many equally remarkable contemporaries who have somehow eluded such recognition over the ensuing decades. Some have suffered this fate due to a less steady flow of recorded output, while others have been adversely affected by the business.And then there’s the select few whom, despite their inimitable style and admirable persistence, seem to always be associated with that one song from a distinctive point in history that listeners find hard to separate from the identity of its interpreter.

If ever there has been a prime example of the latter scenario, it is Thelma Houston. The Mississippi-born, California-reared R&B powerhouse firmed up her gospel roots with The Art Reynolds Singers before beginning her solo career during the late 1960s with Capitol Records. Enduring several label and management transitions, she recorded a variety of savvy pop, soul, and funk before landing her career-defining (and Grammy-winning) smash in 1976 with an unforgettable disco rendering of Harold Melvin & The Blue Notes’ “Don’t Leave Me This Way.” Thelma’s feisty performance atop the mighty instrumental arrangement took the previously obscure cut to #1 across the American R&B, Pop, and Disco charts and into the top 20 in more than a dozen international territories. Over the next 15 years, she released no less than 10 albums and more than 20 singles with varying degrees of success. Without fail, however, it’s “Don’t Leave Me This Way” that’s first mentioned when her name arises.

Far from a one-trick pony, Thelma exhibited her skill as a rousing belter, jazzy siren, smooth seductress, and animated purveyor of rhythm throughout her time with Motown from 1972 to 1979. Soul Music Records’ new reissue of her 1976 LP, Any Way You Like It (with the addition of five bonus tracks) encapsulates this precise diversity within one distinguished single disc. From her sassy, take-no-prisoners delivery on the opening title track to her hauntingly soft and sincerely captivating reading on 1973’s “Do You Know Where You’re Going To” (covered in 1975 by Miss Ross for the Mahogany soundtrack), Thelma treats each song as a narrative of experience enriched with distinctly authentic tone and phrasing.

Any Way You Like It is the album on which Thelma’s recording of “Don’t Leave Me This Way” debuted, and there is no doubt that Hal Davis’s astute production and Art Wright’s fiery arrangement of the Gamble & Huff tune make it a standout amongst the eight original LP cuts. It would be unfair, however, to proclaim that recording as the default centerpiece of the collection, which also offers its share of tender and meaningful ballads and a couple of jazzy-funky numbers. The Michael Lovesmith-penned and -produced “Don’t Make Me Pay (for Another Girl’s Mistake),” for instance, is an all-around glowing slow-jam on which Thelma beautifully evokes the genuine concern and determination of a young lady newly in love with a man still healing from the wounds of a relationship gone bad. Conversely, the insinuating Stevie Wonder/Paul Riser composition, “Don’t Know Why I Love You,” is a sinewy jam on which she fluently veers between staunch and torn a la the lyrics. It’s a downright funky affair heightened by a concluding jam session sated with colorful piano licks, bright horn and organ flair, bluesy guitar touches, and driving percussion.

Further demonstrative of Thelma’s versatility is her adept reading of “If It’s the Last Thing I Do,” a 1937 tune popularized by the likes of Frank Sinatra and Dinah Washington. Backed by a lightly swinging rhythm section punctuated by summery woodwinds and vibrant brass, it quickly engages the listener with its juxtaposition of breezy tempo against Thelma’s gracefully assertive interpretation. Yet another facet of her range shines through on a strong remake of Ralph Graham’s “Differently.” With will and buoyancy, she conveys utter believability as she asks, “So am I different when I try to do things differently? And what gives me the right to demand you live your life the way I’d like to see?”

There’s no question that Any Way You Like It stands the test of time as a rock-solid album comprised of meaningful material, expert musicianship, and cream-of-the-crop vocalizing. There’s an effortless chemistry between Thelma and the musicians that is all too often missing from even the most soulful contenders of contemporary R&B. Yet, this CD reissue is all the more a treasure trove for its inclusion of a handful of non-album tracks previously only available on vinyl. In fact, Thelma’s aforementioned original recording of “Do You Know Where You’re Going To” was only ever available in New Zealand prior to its appearance here. Besides the compelling verses—which differ considerably in theme from the Ross version—the unassuming arrangement and Thelma’s innate understanding of the emotional content make for a rare scenario: even after having heard the more famous rendering countless times through the years and admiring it, this previously unearthed first rendering stands as artistically superior.

A worthy investment for both dedicated fans of authentic soul and admirers of unaffected, timeless female vocalists, Soul Music Records’ CD reissue of Thelma Houston’s Any Way You Like It is a gem to be cherished through the ages. Highly Recommended.