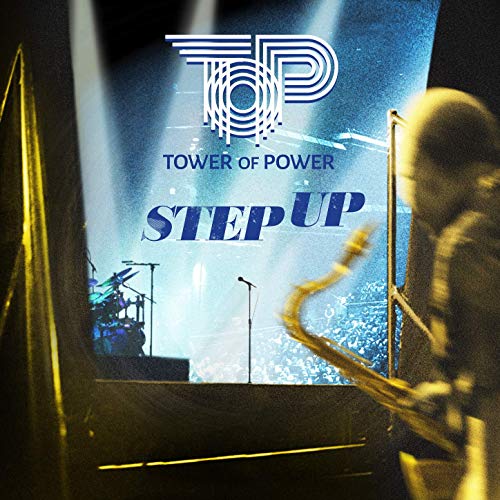 Tower of Power - Step Up

Tower of Power - Step Up

TOP could afford to keep songs in a vault for release at a later date because their brassy brand of R&B, jazz and rock has remained consistent over the years. The band has undergone many personnel changes in the five decades years, but some things have never changed. One is the presence of founders Emilio Castillo and Stephen ‘Doc’ Kupka and long-time drummer Dave Garibaldi. The second is that through all those personnel changes, TOP never stopped being a big, self-contained funk band. Music economics and changes in musical tastes may have pushed other bands to cut personnel and alter their sound, but TOP still sports 10 members and a big sound. Oh, and you could also count of Tower of Power to employ a vocalist who had the pipes to ensure that he would not be overwhelmed by the sheet of sound coming from the band.

The singer might have the angelic, yet power packed tenor of Lenny Williams or the Memphis soul growling/soaring baritone of current singer Marcus Scott, but you cannot be an autotune shrinking violet an expect to be the front man for Tower of Power.

With those basics in place, Castillo, Kupka and company fill Step Up with tracks that are both new and familiar. The album features a slow jam, “Who Would Have Thought,” that is of the type that is a must for any TOP project. The rhythm section sets a laid back foundation that is the springboard for Scott’s vocals that take listeners to the church of self-reflection, regret and hoped for reconciliation on this track about a man who ignored all the signs until it was almost too late.

Meanwhile, upbeat funk numbers such as “The Story of You and I,” and “Any Excuse Will Do,” showcase the world weariness, cynicism and wit that has always been a constant in TOP lyrics and might remind some fans on another Bay Area outfit that a rotating set of musicians orbiting around two mainstays – Steely Dan. The former finds Scott lending his gravelly vocals to a story about a guy who can sum up a relationship by saying she had him fooled. “Any Excuse Will Do” is a deep funk number on which Scott adopts the tone of a preacher sermonizing on society’s endless search of scapegoats.

That track goes hand in hand with the album’s other political number, “If It’s Tea, Give Me Coffee.” This song fuses all of the elements of a TOP cut, a brass section that works equally well as a unit and creative soloists, a rhythm section that can lay down an infectiously funky foundation and a vocalist who adds a sense a of irony to a song about the eternal struggle between common interest and self-interest.

It has to be hard for a band like Tower of Power to continue to make music. The band’s size alone stretches economics of music making to its breaking point. Yet here they are as productive as ever feeding their funk starved fans every other year. How long can it last? I don’t know. But as long as TOP has something to say, I’ll be ready to listen. Solidly Recommended.