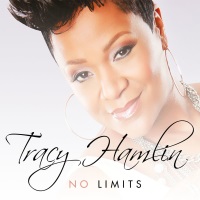 Click on CD cover
to listen or purchase
https://www.amazon.com/No-Limits-Tracy-Hamlin/dp/B0108L89XK/ref=as_sl_pc_tf_til?tag=soultracks-20&linkCode=w00&linkId=YVQ2T4KNAMT3N76Y&creativeASIN=B0108L89XK

Tracy Hamlin has all of the qualities that an artist needs to achieve the commercial success that will probably instead go the some airbrushed, auto-tuned star.

She is classically trained and that training can be heard in her clear-as-a-bell soprano that enlivens every track on her latest project No Limits, as well her previous three recordings. However, the Baltimore native pursued a career as a soul singer because – to paraphrase the title of one of the tracks on No Limits – she loves soul music. Hamlin’s training allowed her to build a career the old school way by working with artists representing a variety of genres, including Carlos Santana, Marcus Miller, Jonathan Butler, Chaka Khan and most notably Pieces of A Dream. Those legends certainly appreciated Hamlin’s years of formal training and woodshedding, and fans who like vocalists who know what to do with a note and a lyric will enjoy the output on No Limits.

So Hamlin brings a great deal of polish and thought into the production of No Limits, a record consisting primarily of originals along with one remake that will bring back some fond memories for soul music fans of a certain age. I always like it when an artist goes a little off the beaten path when choosing to cover a song because that means she is remaking a tune that mean something to her rather than simply remaking songs she thinks listeners will like.

Hamlin’s remake of the forgotten gem “(Give Me Some) Emotion,” a mid-tempo classic released by Webster Lewis and Merry Clayton in late 1979 and 1980, proves to be the perfect vehicle for her musical strengths, which are that rangy and powerful soprano and her clear intonation. Besides, “Emotion” is a great song that harkens back to a style of R&B singing that is rooted in the church and in the bombast of musical theatre, and Hamlin possesses the chops to go to both places comfortably.

Hamlin also shows that there are ways to pay tribute to a musical influence that don’t involve covering a song, and she does so with the sparse piano and percussive number “Standby.” The track finds Hamlin waiting patiently for her cavalier lover to reciprocate her passion, utilizing a piano arrangement that makes allusions to the Prince songs “How Come U Don’t Call Me Anymore.”

Hamlin co-wrote several tracks on No Limits, and that includes the ballad “One Day In Your Life,” a song that finds Hamlin trying to bring perspective to a man after informing him that their relationship is not going to work. This ballad, the best song on an album filled with several good ones, serves as an ideal vehicle for Hamlin’s gifts as a vocalist. She is accompanied primarily by a piano, although Kim Scott’s flute introduces the cut and sets the tone for the narrative. That sparse arrangement provides ample space that Hamlin more than capably fills with her powerful vocals.

No Limits also features two collaborations with Frank McComb. The first is the McComb-penned “Plans For Two,” a track that finds Hamlin preparing to comfort her man with a romantic evening after he had a hard day at work. In addition to writing the tune, McComb also contributes his signature jazz influenced work on the electric keyboard. The inspirational “My Good Day” is a breezy and inspirational mid-tempo duet on which the pair encourages listeners to prepare for better days and to appreciate them when they arrive. Hamlin even proves that she can handle a track that features contemporary R&B production techniques on “Givin’ Me Somethin.’” But then, mastery of one’s craft is what separates the artist from the novice, and, on No Limits, Tracy Hamlin emphatically shows again that she is a true artist. Highly Recommended.