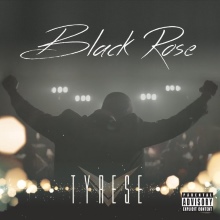 Click on CD cover
to listen or purchase
https://www.amazon.com/Black-Rose-Tyrese/dp/B00ZQUP38S/ref=as_sl_pc_tf_til?tag=soultracks-20&linkCode=w00&linkId=PTKHVU5X3VZG5NHO&creativeASIN=B00ZQUP38S

When that Coca-Cola commercial appeared and a teenage Tyrese was first introduced to the public in 1994, it seemed to mark the appearance of the next great R&B/Soul voice. Overnight, everyone wanted to know who the handsome kid with the infectious smile and the brilliant vocal delivery was and when could we hear more? However, the early promise that followed with such hit songs as “Lately” and the Top 10 “Sweet Lady” from his platinum-selling RCA debut was not to be consummated for many more years to come.

Despite no less than four subsequent commercial solo efforts and three mixtapes, including some rather ill fated efforts at rap, Tyrese never really happened as a recording artist. Things improved dramatically by the time we arrived at his super group, TGT, with Tank and Ginuwine, on 2013’s Three Kings, but nothing from that rather delicious effort quite prepares you for what is reportedly Tyrese’s final stab at recording greatness, Black Rose. It took nine releases over 17 years, but Tyrese finally has an album that fulfills the promise of 21 years ago. Black Rose is Tyrese’s first bona fide grown man’s album that is as vulnerable as it is sexy as it is artistically mature. On his first independent album release since his career began, Tyrese Gibson has finally arrived.

The fourteen tracks from the Voltron/EMI release boast producers B.A.M., Rockwilder, Harvey Mason Jr., and Warryn “Baby Dub” Campbell, as well as co-writers Ambrosius, Tim Kelley, Eric Hudson, Snoop Dogg, Davion Farris, Marcus Hodge, Christopher Perry, Andrew and Kenyon Dixon. To his credit, Tyrese also writes and produces his own vocals here, as well as served as his own A&R for Black Rose. Guests include a who’s who of artists, including Tank, Snoop, Brandy, Jennifer Hudson, Chrisette Michelle, and Eric Bellinger (on background vocals). Collectively, these creatives all make sure that every aspect of this sterling project is done at its highest possible level. And, while every song isn’t the indisputable homerun that its first single, “Shame” (ft. Jennifer Hudson), represents, the album ensures every song feels like it belongs.

About “Shame,” unlike many slam-dunk first singles, this one actually reflects the album it introduces. There are no sleights-of-hand here. With powerful doo wop vocals singing a melody hook reminiscent of Atlantic Starr’s “Send For Me,” and a flat-footed, belting Tyrese chewing all the scenery in the room with his high drama confession, “Shame” is everything every day soul music used to be and hasn’t been on the mainstream side (with few exceptions) in quite some years. It’s Billy Paul, it’s Teddy Pendergrass, it’s Issac Hayes, it’s Sam and Dave and Otis Redding, it’s Tyrese finally accessing his soul line and baring his soul in the one final “go for broke performance” that has always been missing from his catalog of over 100 songs. The most beautiful thing about “Shame” is that its quality on the project is not alone.

“Shame” is joined by “Leave”, “Without My Heart,” and “When We Make Love” on the solo ballad side with Philadelphia soul-meets old-time religion productions, open space for Tyrese’s instrument to swell and riff, but also to take it’s time, and it’s all done with so much heart on the singer’s sleeve, you completely forget the public persona that often borders on egomaniacal. And that’s saying something.

The duets on Black Rose too are sumptuous. “Don’t Wanna Look (feat. Chrisette Michele)” sways at the hips with Marvin and Tammi bliss. “The Rest of Our Lives (feat. Brandy)” is an unusually synthy, urban adult contemporary ballad that surprises in its warmth and real-life relationship expressions. The modern “Sitting On The Dock of the Bay” country ease of “Prior to You (feat. Tank)” hits every barbershop background note with gentleman perfection. Even the hip hop soul meets soft funk of Tyrese’s duet with Snoop, “Dumb Sh*t,” feels grown and sexy, much like Snoop’s duet with Pharrell and Stevie Wonder, “California Roll.” Each song has Tyrese generously giving room and respecting his duet partner’s ample gifts. Like the prior mentioned ballads, they also all will only have their Tyrese presented raw, without the patriarchal coverage he normally swags as manhood, and yet Tyrese has never been more a man that he is on these songs or this album.

It’s been written that the death of fellow "Fast and Furious" co-star and personal friend, Paul Walker, had a profound effect on Tyrese, with Gibson reportedly going into a deep depression over the untimely loss. If it was from that tragedy that this great blues was born and properly channeled through Gibson’s creative touch, then it can be said that Tyrese has transformed an ocean of painful emotion into the truest album of his creative life. And in that harrowing process, he’s also gifted us what is easily one of the best and most consistent R&B/Soul albums of the year. Highly recommended.