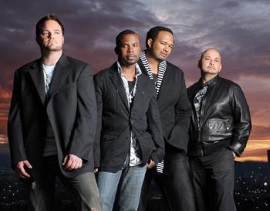 (April 29, 2019) It is tough to believe that it was twenty-five years ago this week that a quartet from California, All-4-One, became instant superstars, as they released their debut single, "I Swear." It not only shot all the way to #1 on the charts, it became the signature song for a group that is still performing to packed houses around the world today.

(April 29, 2019) It is tough to believe that it was twenty-five years ago this week that a quartet from California, All-4-One, became instant superstars, as they released their debut single, "I Swear." It not only shot all the way to #1 on the charts, it became the signature song for a group that is still performing to packed houses around the world today.

There is little doubt that the quartet All-4-One was one of the most talented vocal acts to break out in the 90s. Individually raised as "church singers," Tony Borowiak, Jamie Jones, and Alfred Nevarez met in a California studio where they each sang commercial jingles.  They soon convinced a superb local singer, Delious Kennedy, to join them in search of a record contract.  Together they auditioned for L.A.-based Blitzz Records, performing a cover of the Tymes' classic doo-wop tune "So Much In Love," and were promptly signed by the label for a 1994 debut disc.  Released during the brief renaissance for vocal quartets in the mid 90s (led by Boyz II Men), All-4-One's self-titled debut took off, fronted by their nice a cappella version of "So Much In Love."  The follow up single, a slick, well performed cover of country star John Michael Montgomery's "I Swear," was an unmitigated smash, topping the pop charts for 11 weeks and becoming the year's biggest selling single.

For their second album, the quartet faced a crossroad: With growing support in both pop and Soul corners, and the music scene already having changed from the time of the group's debut album, All-4-One needed to make a statement on its musical direction. The group chose to move toward pop, creating a rather safe, adult contemporary disc, And The Music Speaks, that pushed it away from the Soul and gospel hintings of its first album and toward a softer sound that didn't completely take advantage of their talents.  Electing again to spotlight a David Foster-produced Montgomery cover, "I Can Love You Like That," All-4-One scored moderately on the pop singles chart but unfortunately surrendered Soul music support.  The album faded from the charts quickly, and was immediately followed by a Christmas album and the theme song from the Disney movie The Hunchback of Notre Dame, neither of which fared well in the US.

The group then began recording its next album, On and On, planning a 1997 release.  However, a record company dispute delayed the album for almost 18 months, and it was quietly released on Atlantic in 1999 with little support.  The lack of notice was unfortunate, as On and On was the group's best disc to date, with better overall material, including the notable ballads "Time To Come Home" and "I Will Be Right Here," and uniformly strong lead vocal performances by Kennedy and Jones.

An auto accident then sidelined the quartet for over a year, but they eyed a comeback on Discretion Records via a 2001 album entitled All-4-One...Has Left the Building.  Though touted by that label for some time, the disc was never released.  Virtually forgotten by radio in 2002, All-4-One signed with small American Records and released the album A41 with the help of Foster and  instrumental artist Jim Brickman. While containing the melodic ballad "Not Ready For Goodbye," the disc was not what the group needed to reestablish itself as a major act, and it failed to chart. In 2004, the group released in Asia Split Personality, an album of mostly new material which included the single "Someone to Live In Your Heart."

Soon after Split Personality, lead vocalist Jamie Jones issued a solo CD that included a couple of excellent tracks with his All-4-One mates. The group continued to perform together while planning future recordings.  Jones achieved some success as a producer, particularly on Wayne Brady's Change Is Gonna Come.   It opened the door for the signing of All-4-One by Peak Records and the recording of No Regrets, released in September 2009. Given a second chance at stardom, All-4-One took advantage, recording the group's best disc ever, an excellent updating of the All-4-One sound with hotter arrangements and uniformly solid material. The group continued to tour the world supporting No Regrets as well as their prior catalog.

It was a half decade later that we heard more new music from All-4-One, when they came returned with the expansive collection Twenty+, a disc that included re-recordings of their biggest hits plus a tasty collection of new material. The album had modest success in the U.S., but found a bigger, well deserved international audience. And internationally is where All-4-One remains a force, selling out shows throughout Europe and particularly Asia. And the quartet sounds excellent, now 25 years after they first took the charts by storm.

We've enjoyed watching All-4-One grow artistically over this quarter century of stardom, and look forward to hearing more from them in the future. If you haven't heard them lately, check them out. They sound better than ever.