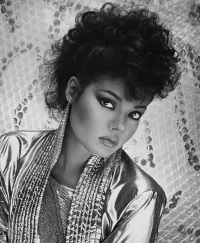 As most SoulTrackers know, longtime soul music great Angela Bofill suffered a stroke in early 2006. Later that year she received the SoulTracks Lifetime Achievement Award and appeared to be on her way to recovery.  Unfortunately, on July 10, 2007, Angie suffered another massive stroke and was in critical condition for quite awhile.  Her fans continued their prayers for her and benefit concerts were held to help Angela (who was ininsured) pay for treatments and physical therapy.

We've been blessed that Rich Engel, Angela's longtime manager, has been keeping us up to date on Angie's progress, which is encouraging.  Below is the most recent update, along with some previous updates:

As most SoulTrackers know, longtime soul music great Angela Bofill suffered a stroke in early 2006. Later that year she received the SoulTracks Lifetime Achievement Award and appeared to be on her way to recovery.  Unfortunately, on July 10, 2007, Angie suffered another massive stroke and was in critical condition for quite awhile.  Her fans continued their prayers for her and benefit concerts were held to help Angela (who was ininsured) pay for treatments and physical therapy.

We've been blessed that Rich Engel, Angela's longtime manager, has been keeping us up to date on Angie's progress, which is encouraging.  Below is the most recent update, along with some previous updates:

November 13, 2012: We received a note from Rich Engel today that Angie has been working with a voice coach and will be singing a duet of "Jingle Bells" with her daughter Shauna at Narada Michael Walden's Christmas show on December 21. While it is only a short song, it will mark a milestone in Angie's recovery as it will be the first time she's sung in public since her first stroke.  Angie was also recently interviewed by Darnell Meyers Johnson for an upcoming reissue of her Intuition CD on Soul Music Records. We are both excited and happy that Angie continues her recovery.

July 2, 2012: Tonight TV One aired its "Unsung" episode paying tribute to Angie's life, career and recovery. We have the full episode here at SoulTracks. You can watch the full Unsung episode by CLICKING HERE.

January 4, 2012: We just heard from Rich that TV One will be dedicating an episode of its Unsung series to Angela. Filming will begin next week in San Francisco, where Angela is preparing another four nights of "The Angela Bofill Experience" at the Rrazz Room. This should be a fascinating episode of our favorite TV series.

November 13, 2011:  Angie continues her recovery and her fans continue to let her know about their love. The Angela Bofill Experience show, with guest vocalist Maysa and musicians like Dave Valentin, has been thrilling crowds wherever it goes. Here is a nice review by Scott Galloway of the show's performance in San Diego.

Here is a note from earlier this year from Rich Engel:

Hey Chris: It's been a while since are last contact, as we remember, and will always be appreciative of SoulTracks for being with us from the beginning. Now that Angie has access to a computer, you should know that Soultracks is in her "Favorites" Column. Angie's spirits are high, and she has real meaning in her life. The "Angela Bofill Experience" show is doing well. We have had sell out shows, and enthusiastic crowds. Thanks again. We love you and your readers.
Your Friend.
Rich

Hey SoulTrackers. Check out Angie on Facebook at: http://www.facebook.com/angela.bofill

August 28, 2010 note from Rich Engel: We completed five shows of "the Angela Bofill Experience" at the rrazz Room, in San Francisco, and sold out every one. Angie admitted that she was scared to death, but got very comfortable, very fast. The show received incredible reviews, and Angie is on cloud nine ( maybe even cloud ten ). Being on stage, as it turned out was the ultimate therapy. It's hard to describe, but it was transformational. The show was inspirational, funny, and Phil, Maysa and the band really brought her music new life. As Angie put it, "I've become a sit down comic." Dave Valentin's on stage interaction with Angie was emotional and hilarious (he actually came to tears on the first show). Our last scheduled Smooth Cruise is  Sept.1 but we are doing a special Encore Cruise with "The Angela Bofill Experience" Oct. 8. We are also bringing "The Experience" to Alexandria Virginia, and to Boston, Mass. and will be adding more dates. I posted the reviews on http://www.angelabofill.com/ Just delighted  to report such good news. Many thanks for being our staunchest supporter. Regards to Soultracks always. Rich Engel.

July 27, 2010: Angie's 4-day, 5 show performance in San Francisco was a rousing success, with five sold out shows and great reviews! Congratulations to Angela and her friends Phil Perry, Dave Valentin and Maysa!

April 27th, 2010: Continuing her miraculous recovery from two devastating strokes, legendary soul/jazz singer Angela Bofill will be appearing in a mini-tour with friends, to be called "The Angela Bofill Experience."  The show will mark Angie's first public appearance since her stroke.

"The show will be a narrative and musical presentation of the songs most relevant to her career," says Angela's manager, Rich Engel. "It will include video footage of her jammin days in Centeral Park, and peppered with footage of her appearances on The American Music Awards (with Michael Jackson), The Tonight Show, and Soul Train. And Angela will be doing on stage narratives about the tunes, with some humorous anecdotes.

Singing the songs of Angela's career will be award winning vocalist Maysa.  And Grammy winner Dave Valentin, who played an important part in Angela's early career, will provide his own stories as well as perform.

The show will open at the Rrazz Room in San Francisco on July 22-25.  During that four night engagement, special guests and close friends Phil Perry and Norman Connors will also be performing.  And after the show, Angela will meet and greet her many fans to thank them for their support.

The show will continue in Detroit (July 28) and later during a special sailing of the "Smooth Cruise" aboard the Spirit of New York on October 8. More details to come on those shows.

December 17, 2009. We were contacted by Rich, letting us know that Angie was recently interviewed by legendary Detroit radio host Rosetta Hines. You can hear the interview at http://www.hinesitefive.com/Interlude.html.  Rosetta used our bio of Angie as the intro to the interview. Here is Angie's note to SoulTrackers from Rich: Angela Bofill would like to tell her fans at Soultracks that " I'll be home for Christmas." The continued support of Chris Rizik, and her fans at Soultracks have played a  major role in facilitating her long struggle towards wellness. We are ecstaticly pleased to announce her release ( Dec. 19th. ) from the Vallejo Rehabilitation Center. Angela will initially be living with her sister, and hopes to be getting her own place in the future. She plans to continue therapy, and write music. Also, she will be working on a script that will focus on her nursing home expierience. Again, Angela would like to thank all her fans for the encouraging letters, and their support. To all the happiest of holidays, and a Very Merry Christmas. Rich Engel.

September 24, 2009. Well much has gone down since our last communication. In August a family tragedy occurred with the death of Angie's nephew Pablo, who was horribly burned to death, in a fatal car accident, at the age of thirty. Angela had dedicated the song " Rainbow Child " to Pablo, which she wrote, in celebration of his birth. The song was included in her second album release Angel Of The Night. The family of course was devastated, and to make matters worse Angie's mother Carmen ( 85 ) suffered a heart attack It was further discovered that Carmen required a bypass, which was successfully performed. Thankfully, her recovery is going better than anticipated, and she is recouperating just down the hall from Angela.

But there is more than encouraging news to report. Because Angela has been receiving daily therapy, her mobility, and speech have improved dramatically. After Carmen gets released, which should be soon, Angela will be moving into her own apartment which has already been secured. Angie is at the point of practicing her singing. She decided to put that off until she gets into her new digs. " I started practicing in the hospital but I drew a crowd. Too embarrasing. " Angela now has thoughts of returning to the stage. With Gods help and prayers from all of us, she just might pull it off. I spoke to Angela in the middle of this writing and she asked me to convey, that "I am truly blessed to have such loyal fans, and that I send love to each and every one." Tracks from live album, Live From Manila, is now available to download at CD Baby. Things are really looking up.

With kindest regards to SoulTracks, and to you Chris, for your never ending support, I remain
Sincerely yours.
Rich Engel.

November 28, 2008.   I spoke to Angie Thanksgiving Day. " She reminds us all to give thanks for our health, and to all who love us " She is now able to walk about two blocks. She gives thanks to our dear friend Narada Micheal Waldon, for furnishing her with a cell phone. Judging by her improved speech, she is putting it to good use. Best of all she has been given the o.k. to travel, and is looking forward to her release from the nursing facility, in the very near future. As a result, she will be making herself available after Xmas, for hosting/meet and greets at public events. If any concert promoters, or event planners, would like to have Angela, please contact Jeff Epstein at Universal Attractions N.Y. jepstein@universalattractions.com or call Jeff at 212 -582 - 7575.  Although Angie is not ready to sing as yet, things are definitely looking good. She is practicing her scales again, and working on writing tunes on her small electric piano. For myself, and on behalf of Angie, thank you Chris, for your help and friendship. To you and your fans, we are both wishing you the best holiday season ever.   Sincerely. Rich Engel.

JUNE 10, 2008 - We just learned that Angie is continuing to improve, both in her speech and in her mobility. She is not quite ready to go home but is looking forward to when she will be able to.  She is hearing from many of her friends.  More as we hear it.

FEBRUARY 20, 2008 - Good news. Angela is now able to walk about fifty feet, with the use of a leg brace, and a one handed walker. Her speech has improved, and her spirits are much better. She still is in the nursing home. Thanks to her fans she is getting the extra therapy she needs. A special thanks to Soul Tracks for keeping her name out there.
With kindest regards,
Rich Engel.

FALL 2007 - Angela remains in a nursing facility in Vallejo, California. Her speech has come back somewhat, although she still struggles. Angela can not walk as of yet, and is getting therapy through state assistance. She has good motor skills on her right side, but little to no feeling on her left side. Her face was not affected. Her mother Carmen, sister Sandra, and daughter Shawna, take her out to dinner every weekend. However, she still requires twenty-four hour care. Angela's spirits are remarkably good, and she really misses her fans. We are still selling her live CD's and stuff on her web site. We are putting out a call for anyone who may have old footage of Angie, for a possible documentary DVD. Angela has not forgotten the generous support and love she has received from her family of friends.
With my best regards to all.
Rich.

We ask SoulTrackers for your continued prayers for Angela's recovery.  Also, please check out her website, where the proceeds of sales of her merchandise are being used to help support Angie's recovery.