Bobby Caldwell's "heartbreaking" illness and how fans can help 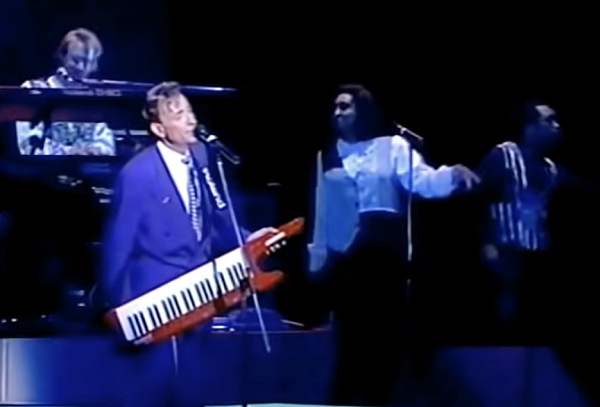 (May 25, 2022) It has been a difficult past year for legendary singer and songwriter Bobby Caldwell and his family. We heard last summer that Bobby had suffered an unknown injury that has forced him to cancel his concerts for the remainder of 2021, with his family asking for prayers.

Now his team has sent a note to fans providing more information about Bobby's ailment and his current situation:

(May 25, 2022) It has been a difficult past year for legendary singer and songwriter Bobby Caldwell and his family. We heard last summer that Bobby had suffered an unknown injury that has forced him to cancel his concerts for the remainder of 2021, with his family asking for prayers.

Now his team has sent a note to fans providing more information about Bobby's ailment and his current situation:

In January of 2017 Bobby was given an antibiotic. After taking the drug for several days he experienced bilateral Achilles tendon ruptures, and developed peripheral neuropathy. Despite these injuries, Bobby continued to perform with the aid of a wheelchair, cane, and his helpers. Unfortunately, Bobby's condition continues to worsen. He has a great deal of neuropathy pain, and his mobility is limited.
Bobby had always planned on performing and making music for the rest of his life. He never could have anticipated what happened to him. It's truly heartbreaking.
Over the past couple of years many of you have sent Bobby greeting cards and letters. It lifts his spirits. He reads all of the correspondence.
If you're interested in sending a note to Bobby, his mailing address is:
Bobby Caldwell
P.O. Box 6
Great Meadows, NJ 07838
Please keep Bobby in your thoughts and prayers.
It is indeed heartbreaking for us to hear about the physical ailments that one of our favorite singers has been going through. But we thank his family for letting us know about it and about how we can support Bobby at this difficult time. We hope SoulTrackers will help too, with both prayers and letters.

The son of Bob and R.H. Caldwell, longtime singers and dancers who were also the hosts of an early TV variety show, Suppertime, Bobby Caldwell was raised in a world surrounded by great entertainers and classic music. Exposed by his parents to opera, jazz, swing, blues, folk and other popular forms of music, he developed an early appreciation for the different architectures of various types of music -- an appreciation that would later help him to move from soul to adult contemporary to smooth jazz to big band sounds during his career. Leaving home at age 17 with his band, Bobby went first to Las Vegas and then to Los Angeles before returning to Miami to record his 1979 eponymous debut album. It became an instant smash on the strength of "What You Won't Do For Love," a spellbinding mid-tempo number that would became one of the most recorded songs of the next three decades (with hit remakes by Peabo Bryson and Natalie Cole, Go West and Phyllis Hyman, among others).  Ironically, that track almost didn't make the album. The LP was completed without the song, but TK Records head Henry Stone sent Caldwell back into the studio because he "didn't see a hit" on the album.  Caldwell went back and quickly penned "What You Won't Do For Love," which ironically became his signature song. Overall, the album Bobby Caldwell was a solid debut that featured a few top notch ballads ("My Flame" and "Come To Me") along with listenable, if unspectacular, light disco tunes.

Bobby went to a more piano-based sound on his follow up, Cat In The Hat, which yielded the hit "Coming Down From Love" but was not nearly as popular as its predecessor. In 1982 he released Carry On, an excellent album that suffered from lack of promotion from his label and died a quick death.

After Carry On's commercial disappointment, Caldwell virtually disappeared as a performer in the U.S. for the remainder of the decade, though he was immensely popular in Asia. During that period he focused on his songwriting and became associated with hit producer David Foster.  His output was exceptional, as he penned hit songs for the Commodores, Chicago and Boz Scaggs and, most notably, the platinum smash "Next Time I Fall" for Peter Cetera and Amy Grant.

Caldwell's success as a writer led to an offer by Polydor to record a new album for the Asian market, consisting largely of his biggest compositions of the 80s. The album, Heart of Mine, became a major international hit and his vehicle for a return to the US market. Heart of Mine's US release in 1989 found a growing new genre ready to embrace Caldwell: Smooth Jazz. The disc became a big seller and established Caldwell as one of the early voices of the emerging Smooth Jazz movement.

In 1991, Caldwell reestablished himself as a star, releasing Stuck On You, another album of quality cuts. It shot to the top of the Smooth Jazz charts and received play on urban adult contemporary stations. He followed it with the equally solid Where Is Love in 1993. As an artist clearly influenced by the soul artists of the 60s and 70s, in 1995 Bobby released Soul Survivor, an album of mostly covers of classic soul tunes, highlighted by his versions of Dionne Warwick's "Walk On By" and the Emotions' "Don't Ask My Neighbors." It became another hit. He also served as a frequent guest vocalist on albums by other jazz artists, including the Crusaders and Richard Elliott.

The formative years watching his parents perform came back in full swing in 1997, as Caldwell made Blue Condition, a big band album that was more authentic and far superior to the "standards" albums that other rock and pop artists had released over the previous decade. Again emphasizing his talent as a songwriter, Caldwell wrote a handful of period pieces and mixed them with classic songs of the 40s and 50s -- and his compositions held up well next to the classics. He followed Blue Condition with Come Rain or Shine, another big band album, and later recorded a live album of standards. Over the next decade Caldwell continued to alternate between new R&B/smooth jazz albums and big band projects.

In 2007 Caldwell moved to the East Coast and finished building a new in-home studio.  He continued to record, releasing After Dark in 2014 and collaborating with modern recording artist Jack Splash on the underground hit Cool Uncle project in 2015. He also toured, mostly on the US coasts, performing a dozen or two shows each year of both the big band and R&B styles.

We will keep SoulTrackers up to date as we hear more, and hope you will continue to pray with us for a full recovery for Bobby Caldwell, and maybe write him a note of support. Thanks.