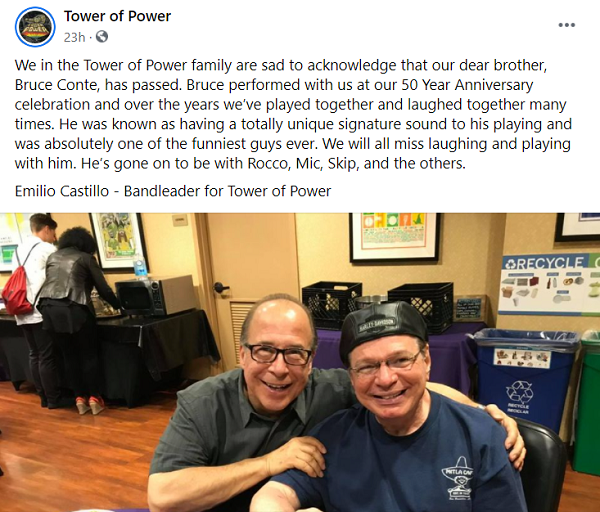 We in the Tower of Power family are sad to acknowledge that our dear brother, Bruce Conte, has passed. Bruce performed with us at our 50 Year Anniversary celebration and over the years we’ve played together and laughed together many times. He was known as having a totally unique signature sound to his playing and was absolutely one of the funniest guys ever. We will all miss laughing and playing with him. He’s gone on to be with Rocco, Mic, Skip, and the others.

A renowned guitarist, Conte was part of Tower of Power from 1972-79 – arguably the band’s Imperial Period - and again in the early 2000s. He also performed with the band at its recent 50th Anniversary concert.

The Fresno, California native was adept at both R&B and jazz, and was a staple in the Bay Area when Castillo shuffled the lineup of Tower of Power in 1972, adding Conte and lead singer Lenny Williams. That lineup became iconic, issuing over a half dozen now-classic albums and helping solidify the group’s reputation on radio and in concerts around the world.

Conte left the group in 1979 and issued a handful of solo albums over the years, as well as joining Al McKay’s All-Stars, an Earth Wind & Fire spinoff group.

Unfortunately, Conte was reportedly ill with both diabetes and leukemia for the last decade of his life.

The sadness of this day is offset by the memory of the joy that Conte gave to millions of music fans over the past half century. Rest in peace, Bruce.

Thanks to SoulTracker Ella for letting us know.