We pay tribute to reggae pioneer Bunny Wailer of The Wailers 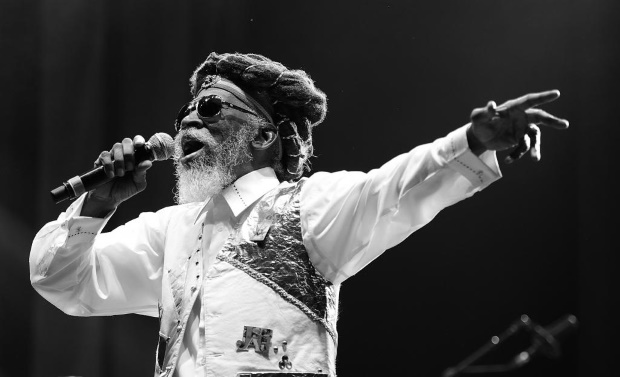 (March 2, 2021) Today the news went ‘round the world:  Bunny Wailer had passed on at the too-young age of 73.. The loss is huge. Bunny was, along with Bob Marley and Peter Tosh, one-third of The Wailers,--Jamaica’s equivalent of The Beatles-- which boasted three magnificent singers and songwriters who together were Jamaica’s greatest vocal group. As a solo artist Bunny created much transcendent, inspirational music including such classic reggae albums as “Blackheart Man,” “Protest,” “Rock ‘N’ Groove” and “Liberation.”

(March 2, 2021) Today the news went ‘round the world:  Bunny Wailer had passed on at the too-young age of 73.. The loss is huge. Bunny was, along with Bob Marley and Peter Tosh, one-third of The Wailers,--Jamaica’s equivalent of The Beatles-- which boasted three magnificent singers and songwriters who together were Jamaica’s greatest vocal group. As a solo artist Bunny created much transcendent, inspirational music including such classic reggae albums as “Blackheart Man,” “Protest,” “Rock ‘N’ Groove” and “Liberation.”

He choose to stay rooted in Jamaica, touring internationally only later in his career, always in touch with the depths of Jamaican culture and Rastafari, and thus was not as well-known as his compatriots. He was a griot of Jamaican music history and indeed was one of the few remaining foundation Jamaican artists whose careers began in the ska era. And, Bunny, like all the Wailers, was directly inspired by American R & B, particularly The Impressions; indeed the cover photo of The Wailers debut album, “The Wailing Wailers,” could be mistaken for an Impressions publicity photo. One of Bunny’s signature compositions, “Dreamland,” was a re-write of an obscure American R & B recording by the El Tempos. Bunny also wrote and produced Marcia Griffiths’ “Electric Boogie” which inspired the dance of the same name. And he recorded an entire album of R & B-oriented material, “Hook, Line & Sinker” that even had a rap.

Bunny Wailer was born Neville Livingstone in 1947 in the village of Nine Mile in the rural parish of St. Ann in Jamaica which was Bob Marley’s birthplace as well; they were childhood friends and moved to Kingston together as teenagers, where they met a fellow struggling youth named Peter Tosh, who happened to have a guitar. They got crucial singing lessons from Joe Higgs, a brilliant singer and songwriter who was an early Jamaican music hit-maker. Along with three other youths, they formed a vocal group, The Wailers, which boiled down to Peter, Bunny and Bob after their initial recordings for Studio One Records—the Motown of Jamaica—in 1964, scoring an early ska hit with “Simmer Down” and other tunes directed to the “rude boys.”

They continued to record with varying commercial success in Jamaica throughout the Sixties, starting their own record label, Wail ‘N Soul ‘M. Hooking up with genius producer Lee Perry in 1969 they recorded two albums that got distribution in the UK; on a trip to the UK, they approached Chris Blackwell, a Jamaican who had founded Island Records, and he signed them, gave them an advance to make an album; they came back with a classic, “Catch A Fire,” which presented them as a band; indeed Bob played guitar, Peter guitar and keyboards and Bunny percussion, augmented by the Barrett Brothers on bass and drums plus Earl Lindo on keys. Though the album was not an immediate big seller, it was part of the first wave of internationally-marketed reggae albums and ground-breaking in its aesthetic.

With the release of “Catch A Fire,” The Wailers toured the UK in 1972 but Bunny found the experience alienating and he subsequently declined to tour for 14 years, pointing out that The Wailers were not a new group but one that had been performing for nearly ten years by then. Due to Island’s emphasis on Bob Marley as front-man, first Bunny then Peter opted to go solo but Bunny always declared that the group did not break up; their motto: “once a Wailer, always a Wailer.” Bunny launched Solomonic, his own label in Jamaica, and his first internationally released solo album was the deeply spiritual reggae classic “Blackheart Man” (the title referring to a disparaging name for Rastafarians). That was followed by one nearly as good in “Protest.” But without touring Bunny’s profile was limited.

Around 1980 he reasserted his presence in dancehall culture with his hugely popular “Rock ‘N’ Groove” album; released internationally as “Rootsman Skanking,” along with the message-heavy “In I Father’s House.,” which contained the monumental hymn “Love Fire” and the epic “Roots, Radics, Rockers, Reggae.”  Therefore followed a series of less successful albums in different styles but in 1988 he released the “Liberation,” album, a call to arms in the anti-apartheid era., on the heels of his first international solo concert at Madison Square Garden, which featured such crucial reggae pioneers as Leroy Sibbles and Psalms (The Gaylads). There followed a triumphant U.S. tour. It may be that Bunny’s decision to tour was motivated by the deaths of his two compatriots; Bob Marley died of cancer in 1981 and Peter Tosh was murdered in 1987.

Always on a mission to maintain and promulgate The Wailers legacy and the authentic history of Jamaican music, Bunny recorded a number of Wailers-themed projects, including the Grammy-winning “Sings The Wailers.” Of the three Wailers, Bunny had the best pure voice; together their harmony singing was unmatched. Where Bob was an inspirational populist shaman and Peter was the militant polemicist, Bunny projected deep-rooted spirituality rooted in Rastafari that was more personal yet powerful. He did not seek the world yet was content to live on his farm, rooted in family and community, and create music as the spirit moved him. That resulted in some of the most moving, deeply felt, soulful music ever created. Bunny Wailer, the last Wailer, lives on!