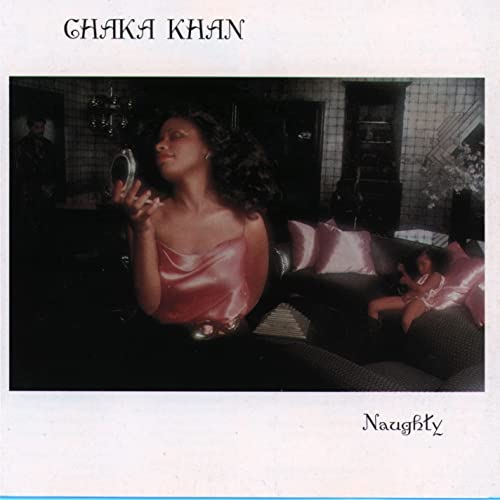 (March 26, 2020) When Chaka Khan teamed up with producer Arif Mardin, the result was a run of five legendary solo albums from 1978 through 1984, each with a distinctive sound and sparkle. The second-born of that union was the sophisticated Naughty, released four decades ago on March 26, 1980. So why isn’t more attention paid to their middle-child? Perhaps because it was born at such an awkward time for everyone.

(March 26, 2020) When Chaka Khan teamed up with producer Arif Mardin, the result was a run of five legendary solo albums from 1978 through 1984, each with a distinctive sound and sparkle. The second-born of that union was the sophisticated Naughty, released four decades ago on March 26, 1980. So why isn’t more attention paid to their middle-child? Perhaps because it was born at such an awkward time for everyone.

The ‘70s provided a decadent parade of love and excess, all set to a four-on-the-floor disco beat. Chaka seized this opportunity to separate herself from a successful but contentious tenure as lead singer of Rufus with her own monster hit “I’m Every Woman” in 1978. Still splitting her time with Rufus, the next year brought another fast funking hit called “Do You Love What You Feel.” Both stayed at #1 on the R&B charts for three weeks. But all that momentum came to a halt in 1979 when Disco Demolition Night marked a cultural sharp turn away from the sound that ruled the decade.

It was during this upheaval that Chaka was gestating Naughty. Hoping lightning would strike twice, “I’m Every Woman” writers Nickolas Ashford and Valerie Simpson were called in again. This time they wrote a pair of disco songs including the album’s lead single: “Clouds.” With its turbulent groove and stellar vocals, all indications predicted a hit. But by the time of its release on April 9, 1980, the weather had changed for disco. “Clouds” barely made Billboard’s R&B Top 10.

They made another run at radio in June with the whimsical second single, “Papillon (aka Hot Butterfly).” This nostalgic fantasy with its sweeping strings and solid rhythm section became the real star of the album. First recorded by Bionic Boogie featuring Luther Vandross in 1978, he gracefully deferred to background duty this time around. His and Cissy Houston’s trademark voices curl around Ms. Khan’s brilliant performance like ruffles on a ball gown.

As grand as it was, “Papillon” could only reach #22 on the R&B charts. Here’s one reason it didn’t fare better: electricity. Soul music was quickly gaining an appetite for synthesizers, an instrument the analog Naughty didn’t make much use of. This put it at odds with #1 Black singles of 1980 such as Michael Jackson’s “Rock With You,” The Whispers’ “And The Beat Goes On,” and “Take Your Time (Do It Right)” by The S.O.S. Band.

Naughty never gambles on synthesizers until its third single, “Get Ready, Get Set.” This radio friendly pop-crossover would have felt more at home on a Leo Sayer or Barry Manilow album, but it was comparatively pedestrian for Chaka. Warner Bros. Records missed the opportunity to flip the 7” over and spotlight its B-side, “So Naughty.” Full of fiery horn flares, and a funky, flirty bassline, it was what radio would expect from Chaka, where “Get Ready” couldn’t crack the Top 40.

This exemplifies the record’s true Achilles’ heel. It was caught between disco and rock during a changing of the guard. As a result, her musically sanitized cover of Honey White & The Night Man’s “All Night’s All Right” with its odd electric violin solo weighed Naughty down. And middling disco holdovers “Too Much Love” and “Our Love’s In Danger” couldn’t lift it back up. The latter suffers despite all the thrust that Chaka, Luther, Cissy, and Cissy’s new-to-the-studio daughter Whitney Houston could give it.

Without an “I’m Every Woman” to power it, Naughty peaked at #6 and lagged in sales. It was never a bad album, but instead a transitional one. Chaka and Arif weren’t entirely dialed in to where music was, but they were hot on the trail of where Chaka was going.

One example is “What You Did,” a stunner written by Khan and her brother Mark Stevens that doubled as B-side for “Clouds.” Always a jazz lover at heart, she crafted a dizzying bebop tuba line that bucked and rumbled through the song’s spicy, percolating chorus. This complex flourish was our first glimpse of Chaka’s jazz prowess on a solo album. This marked the beginning of a dive that would deepen to reveal the treasures of “And The Melody Still Lingers On (Night In Tunisia)” with Dizzy Gillespie and Herbie Hancock, the Grammy-grabbing “Be Bop Medley,” and of course, the entire Echoes of an Era album.

Also overlooked was “Nothing’s Gonna Take You Away.” This quiet storm sound would be perfected and later executed with even more confidence on the understated “Night Moods” and “So Not To Worry.” Subdued and sensual, those weren’t singles either. But if you played them once, they made you go back and play them again.

The Jerry Ragovoy composition “Move Me No Mountain” was touched before by Dionne Warwick and female soul trio Love Unlimited, but Chaka elevated the song considerably. Taking her cue from Aretha Franklin, she let the first verse simmer on low before jumping an octave up for the second. The bridge dipped into the deepest recesses of her range before surfacing to the brightest silvery peaks of her upper register for a stunning climax.

There was so much to love on Naughty, but timing is everything. Because it arrived a year too late, this great album instead became the “one that got away.” Had it been delivered in 1979, radio would have been much kinder to the disco-dancing “Clouds.” And if Rufus’ “Do You Love What You Feel” were pushed back a year, it would have still fit on Black radio next to other #1s like Diana Ross’ “Upside Down” and Tom Browne’s “Funkin’ For Jamaica” -- the latter of which was originally supposed to feature Chaka Khan, who was unable to make it to the studio session.

The stars didn’t perfectly align for this record, but there are no tears to cry here. Through the next five years, Chaka would make out like a bandit with hits, sales, and awards galore. But if you want to know how she did it, start before. Naughty left all the clues out in plain sight.

Mark Chappelle is a Los Angeles-based writer, musician, and vinyl collector. You can connect with him on Twitter and read his work on Medium and Good Men Project.