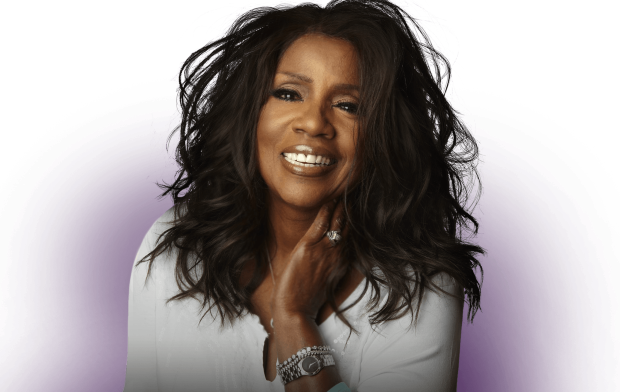 (September 7) Today we wish a very happy birthday to the great Gloria Gaynor. As arguably the "first lady of disco," Gloria Gaynor has forged a successful and long career almost exclusively devoted to high-powered, booming dance music. It has won for her international acclaim and one of the most recognizable songs of the past half century.

(September 7) Today we wish a very happy birthday to the great Gloria Gaynor. As arguably the "first lady of disco," Gloria Gaynor has forged a successful and long career almost exclusively devoted to high-powered, booming dance music. It has won for her international acclaim and one of the most recognizable songs of the past half century.

The New Jersey native signed with MGM Records in the early 70s and landed her first single with a 1974 dance remake of the Jackson Five's "Never Can Say Goodbye." The song hit the Pop top ten, but more importantly helped to thrust the emerging disco sound into the spotlight. With her powerful, deep voice, Gaynor appeared tailor-made for the burgeoning genre, and she belted out a number of disco hits over the next half decade, including "(If You Want It) Do It Yourself" and covers of "Reach Out, I'll Be There" and "Walk On By." However, Gaynor failed to garner much success on either the Pop or Soul charts after her first hit, and appeared to settling in as a niche club singer.

Then in 1979, former Motown hitmaker Freddie Perren, fresh off his successful work with Tavares, took on projects with two Polydor acts: long-lost soul duo Peaches & Herb and Gaynor. He scored #1 hits "Shake Your Groove Thing" and "Reunited" for the former and provided Gaynor with "I Will Survive," a melodic dance song of perseverance and independence that scored with female audiences everywhere. Gaynor's dramatic performance and Perrin's hot arrangements worked beautifully on the cut, and it shot to #1 and became the most popular song of the disco era - still immortalized by many more than a quarter century after its release. Gaynor said she recognized the song's power when she first read the lyrics, but never dreamed of the longevity it would have.

While Gaynor scored minor hits in the next year with "Anybody Wanna Party?" and "Let Me Know," she never again came close to the crossover success of "Survive." And her cover of the La Cage song "I Am What I Am" became her last sizeable Dance charter in 1983.

Gaynor continued recording sporadically during the 80s and early 90s. She also wrote an autobiography and appeared on Broadway in Smokey Joe's Cafe. However, she spent most of those two decades touring internationally, as there appeared to be an insatiable desire around the world to hear her sing "I Will Survive."

In 2002, more than a decade after her previous recording, Gaynor released I Wish You Love, an album that received critical acclaim and took her back to the top of the Dance charts with "Just Keep Thinking About You" and "I Never Knew." It was an impressive addition to her discography and a reminder of Gaynor's strong, expressive voice, nearly thirty years after we first heard it. She was rewarded for her entire career when she, along with her hit "I Will Survive," were inducted into the Dance Music Hall of Fame.

In 2019, Gaynor returned with the highly acclaimed Gospel album, Testimony, which in part told of her own triumph over adversity through her faith. It included a wonderful collaboration with Yolanda Adams, and several other strong cuts.

Gloria Gaynor knows that she will always be most remembered for that song, and she has come to see its importance to so many. It has developed into an anthem for people - primarily women - across the globe facing various types of adversity. The continuing overwhelming response to to the song has led Gloria to catalog the survival stories she's been told by fans who have overcome tremendous odds in their struggles with illness or other adverse situations, many of whom have adopted the song as their own. For those survivors, Gloria Gaynor is much, much more than just a singer. Happy birthday, Ms. Gaynor!