R.I.P. Gordon Keith, the producer who "discovered" the Jackson 5 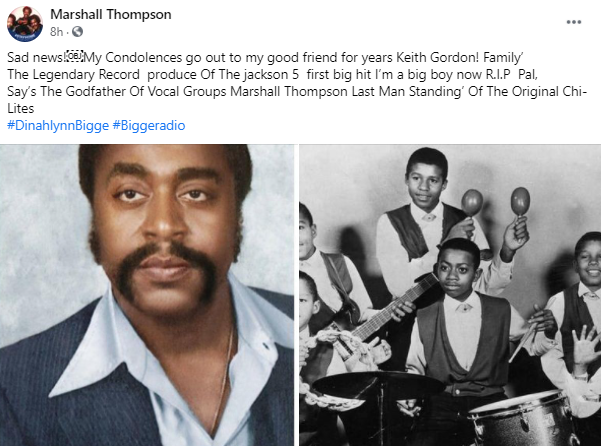 (November 19, 2020) Today we remember Gordon Keith, the producer who was the first person to sign a recording contract with the Jackson 5 and release their records. Mr Keith has died at age 81.

(November 19, 2020) Today we remember Gordon Keith, the producer who was the first person to sign a recording contract with the Jackson 5 and release their records. Mr Keith has died at age 81.

In 1966, Keith and four friends founded Steeltown Records in Gary, Indiana, with each able to manage, record, and sign local talent themselves in and around Gary. Keith saw placards around Gary advertising performances by a young group called 'The Jackson Five Plus Johnny' (Johnny Jackson on drums who was not related to the five). He was intrigued by what the frequency and regularity of these signs implied about the high level of their commitment to their music.He was able to get the Jackson family phone number in Gary from local musicians the Sherl Brothers who, like The Jackson 5, were taking lessons from Shirley Cartman, a local music teacher. He called Joe Jackson, and was invited over to the Jackson home on 2300 Jackson Street (named after President Andrew Jackson) to see the boys perform.

As Keith recalls: “They set up right in the living room. The furniture was pushed back. They and their equipment took up pretty much the whole room. The whole family was there; Janet was a babe in arms. They were getting ready and there was a thick chord stretched between two of the amps Michael was near. It came up to his chest. From right where he was standing, without a running start, he jumped straight up from a flat-footed position right over this chord to clear it. He had all my attention from there on. I knew I was looking at a boy who was superhuman. When they sang, Michael sang like an angel. Jermaine also had a great voice. Jackie could carry a tune. Marlon could really dance. But when Michael danced, all while singing, he blew away James Brown, Jackie Wilson, Fred Astaire, and anyone else you can name. They sang some James Brown, "Cold Sweat", Jackie Wilson, "Doggin Around", some Smokey Robinson, the Temptations, "My Girl" and "Just My Imagination". Well, I was flabbergasted. Knocked out. Blown away. Speechless."

Michael Jackson was just over nine years old when Keith signed The Jackson Five to a management and recording contract in 1967. He recorded several singles with the group, the biggest of which was a song called “Big Boy,” which became a local hit.

Keith’s work with the Jackson 5 ultimately increased their notoriety, and likely helped attract Motown to sign the young act. And the rest is music history.

Keith’s work recalls a time long ago where there were such strong regional music scenes, and he and many musicians like him around the U.S. helped to develop local artists and set the stage for some of the greatest performers of our time. Rest in peace, Mr. Keith.

Portions of this article licensed under the GNU Free Documentation License. It uses material from the Wikipedia article Gordon Keith