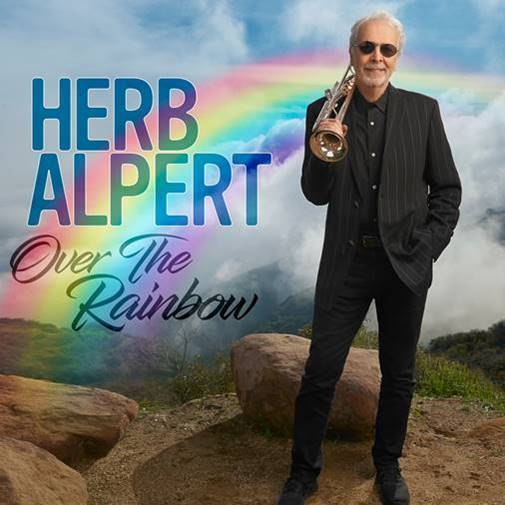 (Malibu, CA)  On September 20, 2019, legendary and Grammy winning musician, producer, creator and artist Herb Alpert will release his newest album Over The Rainbow, a 12 song collection that includes one original track and a cadre of classic and well known interpreted tunes performed in a way that only Alpert can deliver.

The pre-order for the album begins today (July 24th) and the first single, “Skinny Dip,” is available as an instant download when you pre-order (on iTunes and Amazon). The second single, “Fantasy,” will be available on August 23rd.

(Malibu, CA)  On September 20, 2019, legendary and Grammy winning musician, producer, creator and artist Herb Alpert will release his newest album Over The Rainbow, a 12 song collection that includes one original track and a cadre of classic and well known interpreted tunes performed in a way that only Alpert can deliver.

The pre-order for the album begins today (July 24th) and the first single, “Skinny Dip,” is available as an instant download when you pre-order (on iTunes and Amazon). The second single, “Fantasy,” will be available on August 23rd.

As one of the worlds most renowned and celebrated trumpet players, Alpert has once again broken the mold with a collection of songs that spans decades. “This project started like all of the other albums that I have recorded throughout the years, including the Tijuana Brass projects.  I am always looking for good melodies to play and if it is a familiar song that I am working on, I’ll try to do it in a way that it’s never been heard before,” says Alpert. “When choosing songs, I look for something that makes you feel good, I have learned to become an audience to my own music and listen to what creates feelings that stop and call you.”

Recorded at both Alpert’s studio and at famed Grammy winning and multi-nominated engineer, arranger and mixer Jochem van der Saag’s studio, Over The Rainbow was recorded in eight months and boasts a roster of pop, classic and international hits that are familiar to all ages. The first song on the album is  “Skinny Dip,” an original co-written and produced by Alpert, followed by 11 others including  “Ain’t No Sunshine,” “All Love,” “Fantasy,” “Over The Rainbow,” “Copacabana,” “With You I’m Born Again,” “You Are So Beautiful” “Nature Boy,” “Always On My Mind,” “South Of The Border,” and “What A Wonderful World.”

Reflecting on the choice of songs for the new release, Alpert says, “Original songs must have a melody that is fun for me to play, like ‘Skinny Dip,’ a little quirky, but fun. It’s always a bit dangerous to tackle a song like ‘Somewhere Over The Rainbow,’ that has the iconic Judy Garland recording (and many other great recordings,) but I like this version and the way that it starts with Michael Shapiro singing part of the opening refrain and the beautiful orchestration by Eduardo del Barrio.”

“The song  ‘Nature Boy’ arranged by Jochem Van der Saag, is also close to my heart, having personally known and spent some interesting times with the composer, Eden Abez, who lived his life as the real nature boy. ‘All Love,’ was written by Babik Reinhart, a beautiful tribute to his incredibly talented father, Django Reinhardt, who had his own, unique, Gypsy guitar style. ‘You Are So Beautiful,’ is how I feel about my wife and ‘angel,’ Lani.

‘Always on my Mind,’ was taking a chance on a familiar country song that just feels good to me in its new setting as an instrumental and ‘Fantasy,’ is a song that I’ve always liked that was written by Maurice White and Eduardo Del Barrio and also arranged by Eduardo. ‘Ain’t No Sunshine,’ is that iconic recording by Bill Withers and I tried to put the Herb Alpert spin on it, with Hussain Jiffry singing along with my wife, Lani Hall.

‘Wonderful World,’ is a tribute to the great, Louis Armstrong. My intention was not to cover his record, but to show how it had an international impact and to highlight the power of music as a tool to help us understand each other and bring more light into the world, so that peace will have a much better chance to survive.”

Herb Alpert & The Tijuana Brass propelled his sound into the pop music limelight at one point outselling the Beatles two to one. In 1966, they achieved the since-unmatched feat of simultaneously having four albums in the Top 10– and five in the Top 20. Herb Alpert also has the distinction of being the only artist in history who has scored a #1 instrumental and a #1 vocal single on the charts.

Some of Herb Alpert and the Tijuana Brass’ fourteen Top 40 singles include; “The Lonely Bull,” “Mexican Shuffle,” “Spanish Flea,” GRAMMY®-winners “A Taste Of Honey” and “What Now My Love,” and the #1 hits “This Guy’s In Love With You” and “Rise.”  In 2016 the Herb Alpert Presents record label released 30 deluxe re-masters of the entire TJB catalogue plus all of Herb’s solo albums from the ‘70s, ‘80s, ‘90s.  In all, Alpert has recorded over forty albums and produced for many other artists, including Sergio Mendes & Brasil ’66, Stan Getz, Michel Colombier, Gato Barbieri and Alpert’s wife, GRAMMY winning vocalist Lani Hall, to name a few.

As an industry leader, Alpert’s commitment to artists with personal vision guided A&M Records (with partner Jerry Moss) from a Hollywood garage operation into one of the most successful independent record labels in music history that started in 1962 with Herb Alpert and the Tijuana Brass. Stars including Janet Jackson, Quincy Jones, Sergio Mendes & Brasil ’66, Stan Getz, Cat Stevens, Supertramp, The Carpenters, Carole King, Sheryl Crow, Peter Frampton, The Police and scores of others that are evidence of the consistent quality and diversity of the A&M Records family.

In 2006, Alpert and Moss were inducted into the Rock and Roll Hall of Fame in recognition of their accomplishments and are a part of the Grammy Museum’s ”Icons of the Music Industry” series. In 2013 Herb Alpert was awarded The National Medal of Arts Award by President Barack Obama for his musical, philanthropic and artistic contributions.

Over The Rainbow will available on all digital outlets on September 20, 2019.