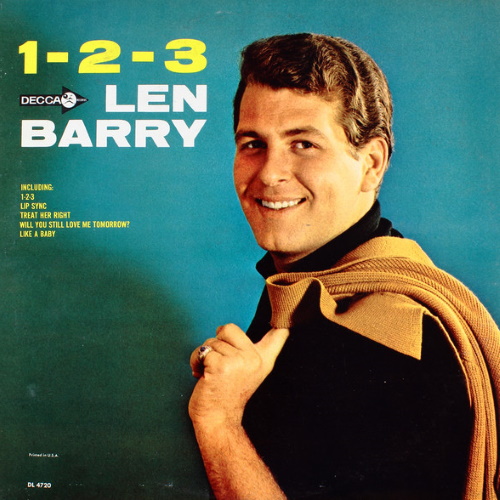 Born Leonard Borisoff in Philadelphia, PA, he performed in vocal groups during his years attending the city’s Overbrook High School, prior to graduation and joining the U.S. Coast Guard. After earning an honorable discharge, Barry returned to the City of Brotherly Love and formed the Dovells in 1961, which included Jerry Gross, Arnie Silver, Jim Mealey, and Mike Freda.

Born Leonard Borisoff in Philadelphia, PA, he performed in vocal groups during his years attending the city’s Overbrook High School, prior to graduation and joining the U.S. Coast Guard. After earning an honorable discharge, Barry returned to the City of Brotherly Love and formed the Dovells in 1961, which included Jerry Gross, Arnie Silver, Jim Mealey, and Mike Freda.

The Dovells’ first and biggest hit, “THE BRISTOL STOMP”, was inspired by the popular dance of the same name. Released on Cameo-Parkway Records in 1961, the single peaked at #2 on Billboard’s Hot 100 Pop Chart. Len and the Dovells followed up with many releases, including the vocal version of guitarist Phil Upchurch’s “YOU CAN’T SIT DOWN” (#3/Pop, #10/R&B) in 1963– with lyrics inspired by the Gospel hymn, “Sit Down Servant”.

Soon after “You Can’t Sit Down” had its run on the charts, Len left the Dovells to launch a solo career. He received many offers from labels, including Motown Records. After cutting an one-off single for Mercury Records in 1964 (“Let’s Do It Again”), Len signed with Decca Records.

His first Decca single, “Lip-Sync (To The Tongue Twisters)”, was issued in 1965. A couple months later, came the monster smash, “1-2-3”, co-written by Barry with producers John Madara and David White (the authors of Lesley Gore’s classic hit, “You Don’t Own Me”). The session featured a who’s who of heavy music folks – guitarist/songwriter (and Len’s best friend) Bobby Eli (later of MFSB fame), bassist Joe Macho, Artie Kaplan on sax, jazz legend Lee Morgan on trumpet,  Bobby Gregg on drums, Leon Huff handled the keyboard chores while the Tymes and Valerie Simpson were on backing vocals. Veteran arranger Jimmy Wisner handled the charts.

More singles came from Len’s Decca tenure – “Like A Baby”, “Somewhere” (from West Side Story”) and “I Struck It Rich” – the latter co-written by Barry with Kenny Gamble and Leon Huff.

By 1967, Len moved on to RCA Victor Records and cut the brilliant album, My Kind of Soul, which featured the single, “The Moving Finger Writes”.  A year later, he cuts “Christopher Columbus” for Amy/Mala/Bell Records. By 1968, Len is signed to the Scepter label, where he records the vocal version of “Keem-O-Sabe” (more on that in a minute) as well as “Spread It Like Butter” and “Bob & Carol, Ted & Alice” (which wasn’t the theme from the movie of the same name).

In 1969, Len moved into behind the scenes work when he launched Marmaduke Productions with Philadelphia radio DJ, Hy Lit, as a partner.  He revisits his former single, “Keem-O-Sabe”, only this time as an instrumental issued under the name The Electric Indian (when really it was members of what became known as MFSB). Picked up by United Artists Records, the single hit the Top 20 of the pop charts.

Len continued to record well into the 1970’s for labels such as Buddah and Paramount but found greater success during this time as a songwriter. Teaming up with childhood chum, Bobby Eli (of “Sideshow” and “Love Won’t Let Me Wait” fame), Len co-wrote tunes for Blue Magic’s Mystic Dragons album in 1976. By the 1980’s both Len and Bobby had two smashes on their hands – “Love Town” (Booker Newberry III) and “Zoom” (Fat Larry’s Band).

For the next few decades before his passing, Len continued to perform as a solo artist and reunited with the Dovells for concerts in the 1990’s. He went on to author the novel, “Black Like Me”, which told the tale of two white kids growing up in a predominantly Black neighborhood and of acceptance.

One comment I had read on social media was in regards to Len’s Decca singles, especially the classic, “1-2-3”, and the very loud fidelity of those releases. I have to admit, no matter if I’m spinning my 45 copy at home or listening to the tune on the radio (as well as “Like A Baby”), forget the already high fidelity – hearing those songs makes me want to turn the volume up even higher!

To Len Barry, thank you for the great classics you recorded over the years. Time to take the stage on that Hullabaloo television studio set above the clouds – sharp suit, coiffed hair and a lot of swagger. You will be missed.