All-star Jazz performance from Detroit coming to vinyl and CD 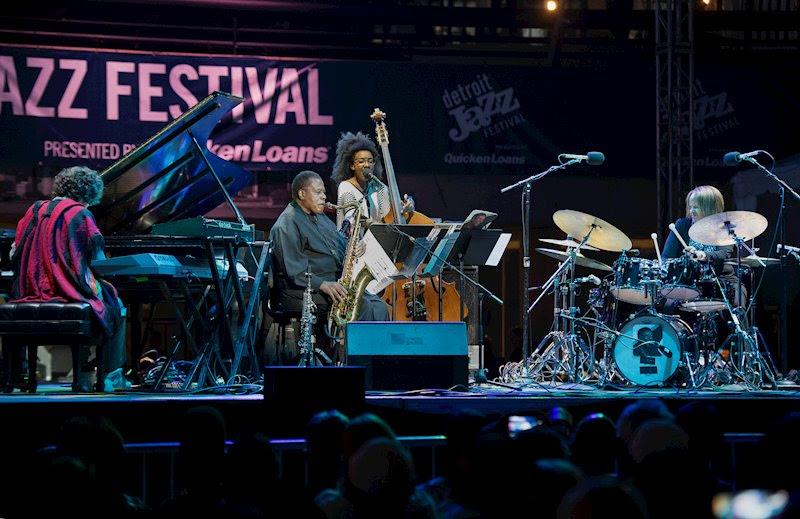 (July 12, 2022) On September 3, 2017, attendees at the Detroit Jazz Festival witnessed a very special one-time-only event: an historic set by a multi-generational jazz supergroup composed of Wayne Shorter, Terri Lyne Carrington, esperanza spalding, and Leo Genovese. Some five years later, fans will finally have the opportunity to experience this magnificent performance — and one of Wayne Shorter's last concerts before his retirement — when Candid Records releases

(July 12, 2022) On September 3, 2017, attendees at the Detroit Jazz Festival witnessed a very special one-time-only event: an historic set by a multi-generational jazz supergroup composed of Wayne Shorter, Terri Lyne Carrington, esperanza spalding, and Leo Genovese. Some five years later, fans will finally have the opportunity to experience this magnificent performance — and one of Wayne Shorter's last concerts before his retirement — when Candid Records releases Live At The Detroit Jazz Festival on Sept 9, 2022. The recording will be released on high quality vinyl and all digital formats.

In a testament to the level of trust and respect shared between these great artists, Shorter, Carrington, Genovese and spalding had a mere outline of how the music might evolve when they took the stage, choosing instead to leave space for spontaneous expression. Terri Lyne Carrington remembers, “We rehearsed some themes earlier that day, but the preparation was really from our lives and profound experiences with each other.” Four lifetimes in music — spread across generations — made these performances possible, erasing the boundaries between composition and improvisation, ensembles and solos in the process.

Vinyl Edition Includes Exclusive Bonus Track: “The Stuff That Dreams Are Made Of (A Conversation)”

Wayne Shorter — who many consider to be jazz’s greatest living composer in addition to being a distinctive and innovative stylist on both tenor and soprano — has contributed inventive solos and innovative compositions to three history-making musical institutions: Art Blakey’s Jazz Messengers (1959-63), the Miles Davis Quintet (1964-70), and Weather Report (1971-86), co-founding the latter with Joe Zawinul.

Shorter sums up the Detroit concert in his own special way: “With the mixture of people — male and female, varying ethnicities and backgrounds — sometimes we did things that sound larger than the four of us, with more of an orchestral approach. If there are things going on in the recording that can be heard by people to the extent that it can turn some thoughts around about life and culture… people who hear it may recognize that we are all different — and the same.”

Carrington first recorded with Wayne Shorter on 1987’s Joy Ryder, and is on the esperanza spalding albums Chamber Music Society and Radio Music Society, along with Leo Genovese on piano. Live At The Detroit Jazz Festival is the first of a number of new Terri Lyne Carrington projects to be announced soon.

spalding’s music, like that of Carrington and Shorter, has never fit into a simple category. Of her night playing with Shorter, Carrington and Genovese, spalding says “That night in Detroit, when we felt ourselves lift off musically, I learned a different definition of flying, of building while flying, and of ‘we.’”

Leo Genovese was born in Argentina, first played piano when he was five, and studied at the University of Rosario and the Berklee College Of Music (where he eventually taught at the astounding age of 20). He made his recording debut in 2003 and has led such albums as Haiku II, Unlocked, Seeds, Rituals and Sin Tiempo. Genovese has also recorded with a large assortment of artists including Jason Palmer, Andre Matos, Francisco Mela, Michael Feinberg, Sara Serpa, Dave Zinno, Dan Blake and Leni Stern.

“Wayne, Terri Lyne and Esperanza are musical superheroes in all places and in all times,” Genovese shares of the admiration he holds for his fellow quartet members. “To be able to share sound, to learn from them and to feel them as friends is a blessing.”

This performance is dedicated to the memory of pianist and composer Geri Allen, who was originally to be a part of the group, but passed away in June of 2017.