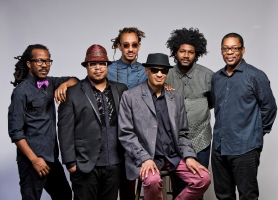 Raul Midón has appeared at Monterey twice, in 2009 and in 2011.  His latest project, Don’t Hesitate, demonstrates why, a dozen years and eight albums into a recording career that’s won him massive critical acclaim and a passionately devoted international fan base, he remains one of his era’s most distinctive and beloved recording artists.

A smoothly expressive singer, an emotionally insightful songwriter and an exciting, innovative acoustic guitarist, Midón maintains an expansive musical vision that’s led People magazine to call him “an eclectic adventurist” and Huffington Post to dub him “a free man beyond category... he plays with such freedom and joy that his hands smile.” The New York Times described him as “a one-man band who turns a guitar into an orchestra and his voice into a chorus.” Billboard called him, simply and aptly, “a virtuoso.”

While Midón’s eclectic talents have won the admiration of fans and critics, they’ve also led to him collaborating with such musical heroes as Herbie Hancock, Bill Withers and Stevie Wonder; appearing on recordings by Jason Mraz, Queen Latifah and Snoop Dogg; and contributing to the soundtrack to Spike Lee’s She Hate Me.

Another noteworthy contributor to Raul’s most recent endeavor is R&B legend Bill Withers, who has largely withdrawn from the spotlight in recent years, but whose longstanding admiration for Midón was enough for the veteran icon to suggest that they try writing together. The result is the lilting, tropical-flavored “Mi Amigo Cubano,” whose Spanish lyrics mark it as a departure for both artists. Midón and Withers can be seen working on the song in the 2009 Withers documentary Still Bill.

“Every time I do a performance,” he says, “I’m working on something, whether it’s diction or pitch or a certain guitar technique. When I’m up on stage, I clear my mind of everything else, and I give people the best of what I’ve got at that moment. Some nights I’ve got more than other nights, but I never phone it in, and I never treat a gig like it’s less important than any other gig. And I’d like to believe that people can feel that. They’re seeing me as pure and truthful as I can be.”

While Midon sets out this week with the first date in Santa Barbara this Thursday, Jan 14th,  he’ll find time to write and record squeezing  it in where he can for a  9th full length album which the pubic is eagerly anticipating.

For fans wanting something fresh and fun, you can sink your teeth into this exquisite clip.  Raul’s interpretation of “Giant Steps” in All 12 Keys.

March 12 – Urbana, IL - U of Il at Urbana-Champaign, Krannert Center