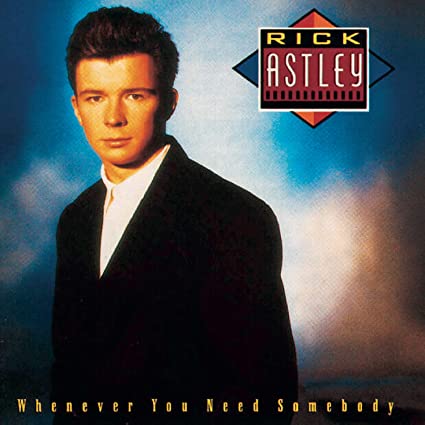 (Press Release: July 29, 2021) How many songs are there that have become iconic in two different eras? Rick Astley’s global cultural phenomenon ‘Never Gonna Give You Up’ is one of the most definitive examples. It was an absolute smash hit when Rick first released it as his debut single back in 1987, shooting to #1 in 25 different countries including five weeks at the top of the UK Singles Chart, and reaching Gold status within weeks.

(Press Release: July 29, 2021) How many songs are there that have become iconic in two different eras? Rick Astley’s global cultural phenomenon ‘Never Gonna Give You Up’ is one of the most definitive examples. It was an absolute smash hit when Rick first released it as his debut single back in 1987, shooting to #1 in 25 different countries including five weeks at the top of the UK Singles Chart, and reaching Gold status within weeks.

Then in the internet era it took on a new life of its own. An unlikely blend of classic songwriting, a meme-worthy video full of ‘80s fashion and killer dance moves, and the emergence of Rickrolling established it as a rare viral sensation that people just don’t get bored with.

As a result, ‘Never Gonna Give You Up’ has now exceeded a staggering one billion views at YouTube - a landmark that has been achieved close to the 34th anniversary of the track’s original release on July 27th, 1987. It’s one of a handful of videos from the pre-YouTube era that have reached a billion views: A-Ha’s ‘Take On Me’, Nirvana’s ‘Smells Like Teen Spirit’ and Queen’s ‘Bohemian Rhapsody’ being notable examples. Even ‘Thriller' hasn't got there yet.

Rick commemorates the achievement with two releases. First is a new ‘Never Gonna Give You Up’ limited edition signed, numbered and coloured 7” vinyl single. Now available to pre-order here, the 7” is backed with the Pianoforte version of the song, which originally featured on his 2019 compilation ‘The Best of Me’.

Rick will soon also release a new mini documentary about the video. It features new interviews with Rick, songwriter/producers Pete Waterman and Mike Stock of SAW, video producer Andy Picheta, and director Simon West, who went on to make blockbusters such as ‘Con Air’, ‘Lara Croft: Tomb Raider’ and ‘The Expendables 2’. More participants will be confirmed in the near future.

It must’ve been unimaginable to think that Rick would still be talking about and performing the song back when he recorded it with Stock, Aitken and Waterman in October 1986. After a slow start (it debuted at #34), it rapidly grew in popularity before reaching #1 just three weeks later.

The accompanying video was filmed around Ladbroke Grove in London. Not only did Rick’s charisma and dance-like-no-one’s-watching energy capture people’s attention, but it was so unusual to see a fresh-faced 21-year-old with the voice of a singer with years of experience.

‘Never Gonna Give You Up’ came to prominence again in 2007 as the Rickrolling phenomenon emerged. Rick rarely engages with Rickrolling himself, but made a surreal exception with a surprise performance at the Macy’s Thanksgiving Parade in 2008.

After stepping away from the music scene to focus on his family, Rick mounted a comeback in 2016 with the album ‘50’. It was a remarkable return which saw him hit #1 for the first time in almost 30 years, as the album reached Platinum status and exceeded 400,000 sales. It was also an astounding creative achievement, as Rick wrote, produced and recorded all lead vocals and instruments for the album himself. That same approach resulted in another Top 10 album when ‘Beautiful Life’ peaked at #6 in 2018.

In 2019, Rick celebrated his extraordinary story with the release of the career-spanning compilation ‘The Best Me of Me’, which featured his early smash hit singles alongside recent fan favourites and deep cuts. Continuing his flair for reinvention, Rick independently recorded a set of ‘Reimagined’ interpretations of his songs, old and new, for the second disc of ‘The Best of Me’. While Rick’s musical style has evolved over the years, the  ‘Reimagined’ recordings demonstrated that quality songwriting has always been an essential hallmark of his work.

Recent years have seen Rick embrace the power of social media. He launched a TikTok channel during lockdown, which is now his biggest social media account with 1.9 million followers and 9.9 million likes. It was around that time that he achieved the most upvoted post in the history of Reddit, when he shared a photo of himself riding a bike in Las Vegas in 1989. He continued to be discovered by a whole new generation with the help of an official ‘Never Gonna Give You Up’ emote for ‘Fortnite’, which is based upon The Astley Shuffle dance from the music video.

Rick Astley’s long-awaited UK arena tour looks set to finally happen this autumn. It starts at the First Direct Arena in Leeds on October 28th and includes free shows for NHS staff and frontline workers at The SSE Arena, Wembley (November 8th) and the Manchester AO Arena (November 13th), all tickets for which were allocated within 30 minutes of them being available. Prior to the tour, Rick will headline a prestigious London show at the Royal Albert Hall. Please see his official website for a full list of concerts and ticket details.