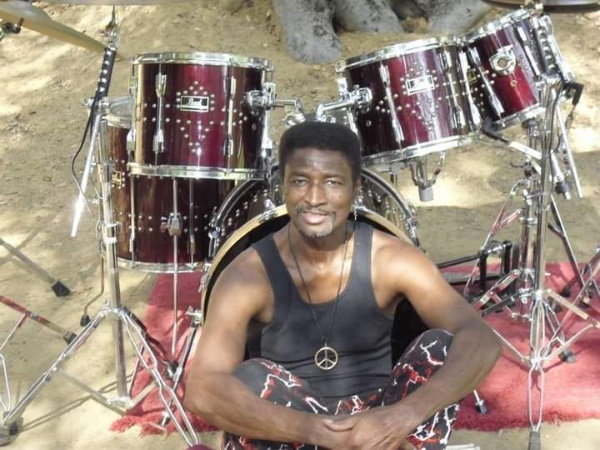 Publisher's Note: We recently learned of the passing of noted R&B drummer Robin Russell, and are honored to present a tribute to Robin written by music journalist supreme, A. Scott Galloway, and shared with us by Robin's family.

Publisher's Note: We recently learned of the passing of noted R&B drummer Robin Russell, and are honored to present a tribute to Robin written by music journalist supreme, A. Scott Galloway, and shared with us by Robin's family.

Robin Russell was born in Los Angeles, California on August 27, 1952.  He graduated from Crenshaw High School, June 19, 1970. Music became his passion at a very early age. His first instrument was saxophone but ultimately was the drums – practiced in the garage to R&B, Rock, Jazz and Blues vinyl - that ushered him to the astonished attention of the music world. Among Robin’s earliest professional gigs was with Modern Blues great Johnny “Guitar” Watson who Robin acknowledged as his “Musical Godfather.” The Watson association led to Robin working with Rock N’ Roll originator Little Richard, climaxing with a filmed concert at Wembley Stadium in London, England, August 5, 1972, that immortalized young Robin as a force with which to be reckoned.

Robin returned home that summer and heard that the twin groups New Birth and The Nite-Liters were looking for a drummer. He went to their Hollywood Hills band house and nailed the audition in time to play on New Birth’s fourth LP, birth day, leaving his mark on the comical “Got to Get a Knutt” and a smokin’ cover of Bobby Womack’s “I Can Understand It.” Robin was their third drummer, playing on their classic `70s Soul LPs for RCA, Buddah and Warner Bros.: It’s Been a Long Time, Comin’ From All Ends, Blind Baby and Love Potion.

Be it on up-tempo throwdowns like “Keep On Doin’ It” or slow jams such as “Wildflower” and the Billboard Soul Singles Chart-topper “Dream Merchant,” his precision yet fluid pulse was instrumental to their excellence. In concert and on TV - from “Soul” and “Soul Train” to “Don Kirshner’s Rock Concert” and “American Bandstand,” - he was a fire-starter! Robin also composed two songs for the fifth and final Nite-Liters LP in `73, A-Nal-Y-Sis: “Drumology” and the syncopated sensation “Serenade for a Jive Turkey.” Robin also drummed for Disco star Sylvester.

Robin also drummed along the routes for the Los Angeles and Orange County marathons, playing as inspiration to the runners and was a lover and student of Mother Nature. Most notably, Robin played his drums in Griffith Park for over 20 years.  So renowned for these sunup-to-sundown musical gifts to the universe,

Robin was featured in a Front-Page Story in the Los Angeles Times on Friday, November 6, 2015. He was also featured in the June 2010 issue of Modern Drummer Magazine. A 2-part mini-documentary, “Griffith Park Drumming Experience” is on YouTube plus an interview for “Truth in Rhythm” that he sat down for via Zoom just before his untimely transition.

In the works for years is an epic mural of Robin, now on display on the upcoming Metro route at Crenshaw & 59th.