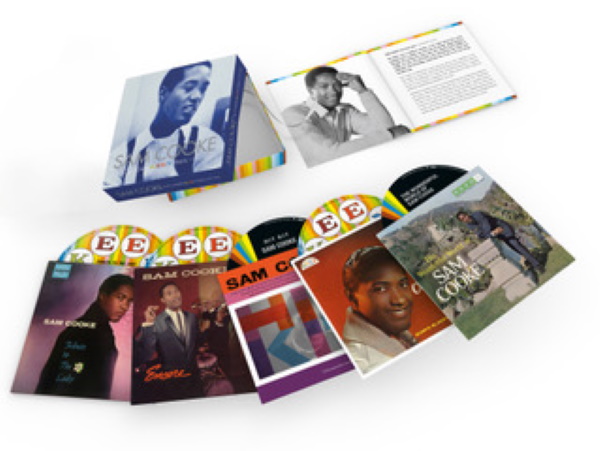 ABKCO Music & Records launches a year-long celebration leading up to the 90th anniversary of Sam Cooke’s birth with the January 24 release of The Complete Keen Years (1957 – 1960) CD Box Set and announces today, a series of eight vinyl editions, including several Tracey Limited titles back in print on vinyl restored with original artwork. The release date was chosen because it is the closest Friday to Cooke’s actual January 22 birthdate.

ABKCO Music & Records launches a year-long celebration leading up to the 90th anniversary of Sam Cooke’s birth with the January 24 release of The Complete Keen Years (1957 – 1960) CD Box Set and announces today, a series of eight vinyl editions, including several Tracey Limited titles back in print on vinyl restored with original artwork. The release date was chosen because it is the closest Friday to Cooke’s actual January 22 birthdate.

Following the expiration of his RCA Victor contract in 1963, Sam Cooke established Tracey Limited, his own label, which assigned distribution rights to RCA for a finite period of time. Tracey was Cooke’s way to assert both artistic commercial control over his own recordings and to better realize his far-reaching musical ambitions. He was one of the first recording stars, black or white, to command this kind of control, the most noteworthy other example at the time being Frank Sinatra. The first album released through Tracey were Sam Cooke At The Copa and Ain’t That Good News.

On April 3rd, Sam Cooke At the Copa and Ain’t That Good News will be back in print on vinyl, and also available for the first time on vinyl, Keep Movin’ On, the critically acclaimed compilation that was first issued on CD nineteen years ago. Keep Movin’ On, a late career overview released in 2001, was titled after a song which, at that time, had never before been released. The album was lauded by Rolling Stone as “an indispensable collection” but has never been available on LP until now.  Its 23 tracks are offered on two 180 gm vinyl LPs housed in a gatefold package with the original essay by Peter Guralnick intact.

Listen to the track “Keep Movin’ On” on Spotify: https://open.spotify.com/track/17gOVHpFzpeFHDx3j6mV02

Sam Cooke At The Copa, first issued in October of 1964, is the audio document of Cooke’s triumphant stand at New York’s leading nightclub and offers insight into his easy going but totally focused performing style in front of a sophisticated audience.  The New York Times review noted of Cooke’s Copacabana performance fifty-five years ago, “It may surprise that he has dignity, humility and feeling to go with a strong voice. In the years to come, more will be heard of Mr. Cooke.  His is a talent that can grow.”  Despite Cooke’s tragic and untimely death before the end of that year, the review’s prophesy has been borne out by the masterful performances heard on At The Copa that include “Nobody Knows You When You’re Down and Out,” “Frankie and Johnny,” “Try A Little Tenderness,”  and the hits “Twistin’ The Night Away,” “You Send Me” and “(I Love You) For Sentimental Reasons.”  Of special note is Cooke’s version of Bob Dylan’s “Blowin’ In The Wind” that reflected the struggle for civil rights that was underway at that time.  Dylan’s song inspired Cooke to write his like-themed masterpiece, “A Change Is Gonna Come.”

Ain’t That Good News was originally issued earlier in 1964 via Tracey Records. It was to be the star’s final studio album released during his lifetime and, as such, finds Cooke at the apogee of his pop-soul career with the title track going to #1 on the Cash Box R&B chart. The album’s folk tinged “Meet Me At Mary’s Place” was the inspiration for “Mary’s Place,” the Bruce Springsteen song heard on his 2002 album The Rising. Also featured is “Good Times,” which the Rolling Stones were inspired to record and include on the band’s Out of Our Heads album as a tribute to Cooke after his passing while “Another Saturday Night” went Top 10 on Billboard’s Hot 100.  The album provided the original context for the still resonant “A Change Is Gonna Come” that went on to become a musical beacon during the struggle for civil rights. Upon his election as 44th President of the United States, Barack Obama paraphrased the song’s key lyrics before a massive crowd of supporters at Chicago’s Grant Park declaring, “It's been a long time coming, but tonight, because of what we did on this day, in this election, at this defining moment, change has come to America.”

Also planned for 2020 the individual component albums of The Complete Keen Years (1957 -1960) are also being released as vinyl LPs alongside the CD box set.  Sourced from newly discovered master tape reels, these albums, pressed on 180 gm vinyl, feature restored original art and the original tune stacks as when first released.  They include Sam Cooke, Encore, Tribute to The Lady, Hit Kit and The Wonderful World of Sam Cooke, essential titles in the Sam Cooke vinyl library.