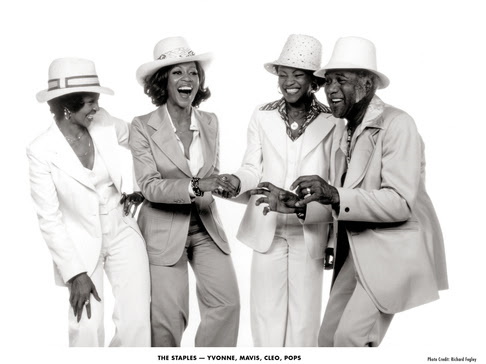 Omnivore Recordings will reissue four 1970s released by the group — the Curtis Mayfield-produced Let’s Do It Again: Sound Track and Pass It On on June 5, 2020, and Family Tree, produced by Jerry Wexler and Barry Beckett, and Unlock Your Mind, produced by Chicago soul giant Eugene Record, on June 26, 2020.

Omnivore Recordings will reissue four 1970s released by the group — the Curtis Mayfield-produced Let’s Do It Again: Sound Track and Pass It On on June 5, 2020, and Family Tree, produced by Jerry Wexler and Barry Beckett, and Unlock Your Mind, produced by Chicago soul giant Eugene Record, on June 26, 2020.

In the ’50s, The Staple Singers were among the greatest of the post-war gospel groups. The ’60s found them recording for a variety of labels like Vee-Jay, Riverside, Epic, and ultimately Stax, pioneering the “soul-folk” sound. By the end of the decade they were soul music superstars, with hits like “I Know a Place” and “I’ll Take You There.”

During the ’70s, they had 13 singles on the U.S. Pop chart and 20 on the U.S. R&B chart. Besides recording, touring and chasing songs up the charts, the group also found time to not only appear in music-related motion pictures like Wattstax (1972) and The Band’s The Last Waltz (1976), but they also contributed to the Sidney Poitier-directed film soundtrack Let’s Do It Again, with music produced by Curtis Mayfield. This, their first post-Stax effort, sent the title track, “Let’s Do It Again,” to the number one spot on both the Pop and R&B charts.

Though the hits slowed after the mid-’70s, the Staples did have a #5 dance chart hit with a cover of the Talking Heads’ song “Slippery People” in 1984. Mavis Staples had been releasing solo albums dating back to 1969’s self-titled effort on Stax, but started to pick up the release tempo and carry the family business forward with a pair of albums for the Paisley Park label under the direction of Prince in 1989 and 1993. She continues performing and releasing albums on Anti- Records to this day, working with artists and producers Ry Cooder, Jeff Tweedy, Arcade Fire, Gorillaz, and Ben Harper, among others.

In his liner notes for Let’s Do It Again, Grammy®-Award winning writer (and Stax musicologist) Rob Bowman explains: “Soundtrack albums are a genre unto themselves. They often contain a great title song, but commonly the bulk of the material on these albums are extended versions of instrumental bits that were written to serve the visual narrative of the film rather than to be listened to repeatedly unto themselves. In the case of Let’s Do It Again, the title track, ‘New Orleans’ and the soul nourishing melody and groove of ‘I Want To Thank You’ make this particular soundtrack an absolutely essential part of The Staple Stingers’ oeuvre. When it was originally released, the album reached #5 on the R&B album charts and #20 on the pop charts.”

Bowman also sets the scene for Pass It On in his notes for that reissue: “Basking in the glow of the tremendous acclaim for their first post-Stax album, the Curtis Mayfield-produced Let’s Do It Again, both The Staple Singers and their record company had every reason to believe that they could count on substantive commercial success for the foreseeable future.

“In early summer 1976, Pops, Mavis, Cleotha, and Yvonne were once again ensconced at Mayfield’s Curtom Studios in Chicago. As was the case with Let’s Do It Again, backing was provided by the crack Curtom house band: Mayfield himself, handling the lead guitar chores, with Phil Upchurch and Gary Thompson playing rhythm guitar, Joseph ‘Lucky’ Scott holding down the bass chair, Master Henry 3 Gibson conjuring up his supernaturally funky conga and bongo parts, the trap drum kit split between Quinton Joseph and Donelle Hagen, with Rich Tufo playing keys and crafting the arrangements.

“Whereas the first two post-Stax albums, Let’s Do It Again and Pass It On, had been produced by Chicago soul-meister Curtis Mayfield. For Family Tree, the decision was made to hire a very different Chicago-based producer and songwriter, Eugene Record. Record had come to fame in the early 1970s with the Chi-Lites, co-writing and singing lead on a string of hits including ‘Have You Seen Her,’ ‘Oh Girl’ and ‘(For God’s Sake) Give More Power to the People.’ When the Chi-Lites’ label, Brunswick Records, ran into financial difficulty in 1975, Record opted to go solo and signed a four-album deal with Warner Bros., the same label that The Staple Singers were signed to.”

In his liner notes for the Unclock Your Mind reissue, Bowman writes:"As the sun rose on January 1, 1978, The Staple Singers were struggling to stay relevant. Over the past quarter century the group had risen through the ranks of the gospel world, single-handily founded the sub-genre soul folk and had become soul music superstars when they recorded for Stax Records in the first half of the 1970s. After Stax encountered financial trouble leading to eventual bankruptcy, the Staples signed a three-album deal with Warner Bros. The new arrangement got off to a great start with the group’s first post-Stax single, the Curtis Mayfield written and produced ‘Let’s Do It Again,’ topping the charts in late 1975. Since then the Staples had recorded a second album with Mayfield, 1976’s Pass It On, and a third Warner Bros. album produced by former Chi-Lite Eugene Record, 1977’s Family Tree. With each new release, the group found themselves slipping further and further down the R&B charts while missing the pop charts altogether. A radical solution was called for.

“All of The Staple Singers’ biggest hits on Stax, including ‘Respect Yourself,’ ‘I’ll Take You There’ and ‘If You’re Ready (Come Go With Me),’ had been recorded at Muscle Shoals Sound Studio with the Muscle Shoals Rhythm Section. For the Unlock Your Mind album, the group decided to return to the studio where they had crafted their most successful records. Production chores were to be handled by legendary producer Jerry Wexler alongside Muscle Shoals keyboard whiz Barry Beckett. While Wexler had enjoyed a long and storied career in black music with his greatest work as a producer undoubtedly the Aretha Franklin and Wilson Pickett sessions he conducted with the Muscle Shoals Rhythm Section, this would be the first time he would work with the first family of song, The Staple Singers.”

The four new Staples editions feature liner notes from Bowman and, as bonus tracks, all of the single edits. These reissues were produced and remastered by Grammy®-winners Cheryl Pawelski and Michael Graves, respectively, and include photos and ephemera in the booklets.

Let’s Do It Again