"Summer of Soul" soundtrack coming to CD and digital 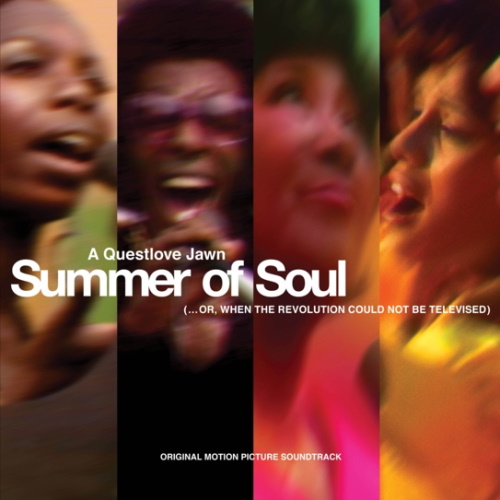 December 9, 2021,-New York, NY-Legacy Recordings, the catalog division of Sony Music Entertainment, Mass Distraction Media, documentary producers David Dinerstein, Robert Fyvolent, and Joseph Patel alongside filmmaker, director, producer Ahmir “Questlove” Thompson announce the release of the Summer of Soul (...Or, When The Revolution Could Not Be Televised) Original Motion Picture Soundtrack on January 28, 2022. The album accompanies Questlove’s directorial debut documentary Summer of Soul (...Or, When the Revolution Could Not Be Televised), which won the Grand Jury Prize and Audience Award at the Sundance Film Festival and is available in select theaters and on Hulu now. It notably took home six top honors at the Critics Choice Awards, including “Best Documentary Feature,” “Best Director,” “Best First Documentary Feature,” “Best Editing,” “Best Archival Documentary,” and “Best Music Documentary,” and was Winner of Best Documentary Award from the National Board of Review. It is currently nominated for “Best Music Film” at the 2022 GRAMMY® Awards.

Summer of Soul (...Or, When The Revolution Could Not Be Televised) Original Motion Picture Soundtrack is available for pre-order now in digital and CD formats HERE. A vinyl LP configuration will be released later next year.

Like the documentary, most of the audio recordings that were recorded during the 1969 Harlem Cultural Festival have not been heard for over 50 years, keeping this incredible event in America’s history lost - until now.   The Summer of Soul (...Or, When The Revolution Could Not Be Televised) Original Motion Picture Soundtrack is a joyous musical celebration and the rediscovery of a nearly erased historical event that celebrated Black culture, pride and unity.

For the album, Questlove carefully selected 17 live renditions of jazz, blues, R&B, Latin, and soul classics performed over the course of The Harlem Cultural Festival in 1969 as chronicled by the film. Heralding the soundtrack, Sly & The Family Stone’s performance of “Sing A Simple Song” debuts today. Listen to it HERE

Additionally, the Soundtrack boasts everything from B.B. King’s poignant and powerful guitar-driven gem “Why I Sing The Blues” to the rapturous “Precious Lord Take My Hand” by The Operation Breadbasket Orchestra & Choir featuring Mahalia Jackson and Mavis Staples. Not to mention, Gladys Knight & The Pips show out on a simmering “I Heard It Through The Grapevine,” while Nina Simone’s voice smolders on “Backlash Blues” and “Are You Ready.”

Said Ahmir “Questlove” Thompson, “It goes beyond saying that you can’t have a monster music journey on film without an equally awesome soundtrack. The people demanded ‘more!’.  So for the people, we bring you musical manna that hopefully won’t be the last serving. These performances are lightning in a bottle. Pure artistry! Enjoy.”

Said Robert Fyvolent and David Dinerstein from Mass Distraction Media, "We are thrilled to be partnering with Legacy to share some of the incredible audio recordings from the 1969 Harlem Cultural Festival that were featured in the documentary. The gospel, blues, R&B, soul, Latin, and jazz classics on this record have stood the test of time. We hope these live performances from these legendary artists, captured at a key moment during our country’s ongoing struggle for civil rights equality, can bring joy to everyone like it did to the Harlem community over 50 years ago."

Stay tuned for more news and announcements about the Summer of Soul (...Or, When The Revolution Could Not Be Televised) Original Motion Picture Soundtrack soon.

In his acclaimed debut as a filmmaker, Ahmir “Questlove” Thompson presents a powerful and transporting documentary—part music film, part historical record created around an epic event that celebrated Black history, culture, and fashion. Over the course of six weeks in the summer of 1969, just one hundred miles south of Woodstock, The Harlem Cultural Festival was filmed in Mount Morris Park (now Marcus Garvey Park). The footage was largely forgotten—until now. Summer of Soul (...Or, When the Revolution Could Not Be Televised) shines a light on the importance of history to our spiritual well-being and stands as a testament to the healing power of music during times of unrest, both past and present. The feature includes concert performances by Nina Simone, Sly & the Family Stone, Gladys Knight & the Pips, Mahalia Jackson, B.B. King, The 5th Dimension and more.
Summer of Soul (...Or, When the Revolution Could Not Be Televised) premiered at the Sundance Film Festival, where it won both the Grand Jury Prize and Audience Award. It is streaming on Hulu in conjunction with Disney General Entertainment’s Onyx Collective; Searchlight Pictures released it theatrically.

Summer of Soul (...Or, When The Revolution Could Not Be Televised) Original Motion Picture Soundtrack