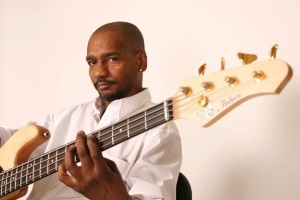 (November 11, 2016) We are very sad to inform SoulTrackers of the death of bass player supreme, Victor Bailey, known to many for his work as a member of Weather Report and later as a solo artist. He was also a teacher at the prestigious Berklee School of music. Bailey had suffered for many years from  Charcot-Marie-Tooth disease, and that disease ultimately took his life.

For those who didn’t know the work of Victor Bailey, below is an excerpt from his own writings describing his career. To see his full biography, please visit  his website. He will be greatly missed.

(November 11, 2016) We are very sad to inform SoulTrackers of the death of bass player supreme, Victor Bailey, known to many for his work as a member of Weather Report and later as a solo artist. He was also a teacher at the prestigious Berklee School of music. Bailey had suffered for many years from  Charcot-Marie-Tooth disease, and that disease ultimately took his life.

For those who didn’t know the work of Victor Bailey, below is an excerpt from his own writings describing his career. To see his full biography, please visit  his website. He will be greatly missed.

I was born in Philadelphia, on March 27, 1960. I was born into a musical family sothere was music playing constantly from the moment I arrived on the planet. My dad, Morris Bailey Jr., is a master composer, arranger, producer, saxophonist, artist and teacher.

Our house was filled with music, with singers and musicians coming and going practically every day. From the time I was born I was drawn to music and showed a natural ability to play anything I heard on any instrument. When I was ten I wanted to play drums. So I got a drumset for Christmas. When we set them up I started playing immediately.

Of course the most life changing thing that ever happened was my switch to bass, which happened totally by accident. I was in a band with some neighborhood guys, playing drums, and the bass player didn't want to play with me because I was too serious. He was a grown man and here was this little kid telling everybody what to play, when they're out of tune etc. So he quit the band and walked out. The only other person around who played anything was a drummer. So I said, "I'll play bass." That moment changed my life forever. Although I had never played before, I instantly understood the instrument. I not only played all the songs but even added fills or "runs" as we called it at the time. My father, who NEVER came downstairs to listen to any of my bands, came charging down the stairs yelling "Who's playing bass, who's playing bass?" When he saw it was me he said, "You should be a bass player." I said, "I know." My days as a drummer were over.

Three weeks after that I did my first gig, and within three months I was as busy as any bassist in the Philadelphia area. One night I'd do a funk gig. Next day, a record date. Next night, a big band gig, followed by a bebop quartet the next night. That diversity of styles continues for me to this day.

The next big step for me was going to Berklee College of Music in Boston. Berklee was one of the greatest periods of growth I've ever had. All there was to do was work on music and many of my classmates who understood and took advantage of that are successful now (including Branford Marsalis, Jeff "Tain" Watts, Kevin Eubanks, Greg Osby, Wallace Roney, Cindy Blackman, Terri Lynne Carrington, who was about twelve years old at the time, Stu Hamm, Steve Vai, Mark Ledford, Tommy Campbell, Rachelle Ferrell, Wallace Roney, Donald Harrison, and many other successful cats of our generation.

Once during my time at Berklee, a friend had me play over the phone for a guy in New York. That guy in New York turned out to be drummer Poogie Bell. During my second year at Berklee, Poogie came to Boston with South African trumpeter Hugh Masakela's band. Hugh was looking for a new bass player and Poogie recommended me. I went to their gig with a tape and cassette player and Hugh listened and hired me on the spot. A week later I was on the road and never looked back.

That first year, I think I played on about fifty records. And I played with so many great musicians it was like I was in a dream world. Some were my age, and many of them I grew up idolizing. I played and recorded with idols like Sonny Rollins, Miriam Makeba, Lenny White, Hamiet Bluiet, Olu Dara, Don Alias, Larry Coryell,Sadao Watanabe, Michael Urbaniak and Ursula Dudziak. I even got to sit in with Roy Haynes. Of the younger generations I played and recorded with Tom Browne, Bobby Broom, Kenny Kirkland, Bernard Wright, Mike Stern, Dennis Chambers, Poogie Bell, Kevin Eubanks, and many others. As a matter of fact, New York City was so alive at that time, that as I went from club to club, I may have sat in with or listened to everybody I just mentioned in one night! NO JOKE! It was a very good year.

After about a year in the big city, I did two gigs with South African vocalist Miriam Makeba. On drums was a fantastic player by the name of Omar Hakim. Omar and I had met a year earlier when we did guitarist Bobby Broom's record, "Clean Sweep". This was the first time we did a gig together, but everyone was aware, even at rehearsals, that as a rhythm section we had something all our own. It was light, bouncy and free, yet extremely tight, powerful and original.

At the end of the second gig he said, "I have the gig with Weather Report and they're looking for a new bass player." My eyes became the size of the Earth. I had been telling everyone since I was sixteen years old that I was going to play with Weather Report after Jaco. And when word got out that Jaco had gone solo EVERYONE in New York said "that's your gig" to me. This was fate. Omar gave me Joe Zawinul's address and told me to send him a tape. I put together a demo of a variety of things-a version of Marvin Gaye's, "What's Going On", with bass melody and scat bass solo, a multitracked version of the Beatles, "She's Leaving Home" (which I played for Jaco the first time I met him and he copped from me for his Holiday For Pans record), a funk/thumb groove tune I had written and a burning live solo on Giant Steps. Omar gave Joe my number and as incredible as it sounds before I even sent him the tape he called me and said, "I know you're the guy I'm going to hire, I can feel it."

About a week later I got a call from management saying, "Welcome to Weather Report." The aftermath of course is that Omar and I made the ultimate Weather Report rhythm section and laid down the definitive bass and drum performances in the band's history,and recorded the most inspiring music the band ever did. This was the beginning of a long and inspiring journey.

In the days since, I have played on over one thousand recordings with everyone from Weather Report, to Michael Brecker, to LL Cool J, to Mary J Blige. I have written and produced artists like the Force MD's, Alex Bugnon, George Howard and Missing Links. In the late 80's and early 90's I took the jazz fusion supergroup Steps Ahead to new heights,transitioning them from a clever acoustic jazz band to an funky electric monster with Mike Mainieri, Michael Brecker, Peter Erskine and Chuck Loeb.

In 1989, I released my first record, "Bottom's Up", which was an instant bass classic and one of the most important records ever by a bass guitarist. It was the first time I was ever recorded playing the way I REALLY PLAY, instead of just playing grooves for other people's records (though I'm not complaining, I've played grooves behind some pretty great artists).

People finally got to hear my writing, arranging, keyboard playing, drum and sound programming, and singing. I finally established that I was much more than a backup bass player, something that I'd felt I still had to do as long as I had been in New York. Throughout the mid 90's I toured with pop megastar Madonna, one of the greatest experiences of my life.