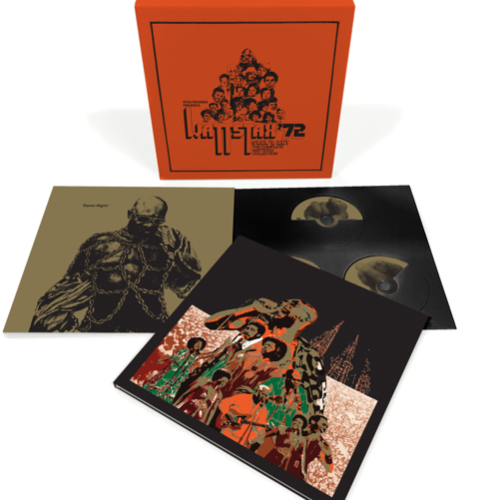 Los Angeles, CA (December 7, 2022) — Stax Records and Craft Recordings are proud to announce the release of multiple new titles paying homage to the iconic Wattstax Benefit Concert which took place at the Los Angeles Memorial Coliseum on August 20th, 1972. Soul’d Out: The Complete Wattstax Collection, Wattstax: The Complete Concert, and The Best of Wattstax, plus 2-LP reissues of the original soundtrack albums Wattstax: The Living Word and The Living Word: Wattstax 2 will all be released on February 24 and are available for pre-order

Los Angeles, CA (December 7, 2022) — Stax Records and Craft Recordings are proud to announce the release of multiple new titles paying homage to the iconic Wattstax Benefit Concert which took place at the Los Angeles Memorial Coliseum on August 20th, 1972. Soul’d Out: The Complete Wattstax Collection, Wattstax: The Complete Concert, and The Best of Wattstax, plus 2-LP reissues of the original soundtrack albums Wattstax: The Living Word and The Living Word: Wattstax 2 will all be released on February 24 and are available for pre-order here today.

In celebration of the 1973 Columbia Pictures music documentary, Sony Pictures will re-release Wattstax at participating Alamo Drafthouse locations throughout the U.S. from February 24. To purchase tickets, click here.

Created in conjunction with the annual Watts Summer Festival to commemorate the seventh anniversary of the Watts uprising in Los Angeles, the Wattstax benefit concert was attended by more than 100,000 people. It featured performances from Stax Records’ most popular artists of the time, including, but not limited to, Isaac Hayes, The Staple Singers, Rufus Thomas, Carla Thomas and The Bar-Kays. These releases are the first complete audio collections of what Wattstax creator and then-President of Stax Records, Al Bell calls the “most jubilant celebration of African American music, culture, and values in American history.”

Soul’d Out: The Complete Wattstax Collection is a 12-CD box set featuring the complete 1972 L.A. Memorial Coliseum concert plus recordings from the Summit Club, including 31 previously unreleased tracks across the collection.  These recordings are housed in a folio with a 76-page, full-color book featuring an introduction by Wattstax creator Al Bell, and new essays by Rob Bowman and A. Scott Galloway. A previously unreleased version of the iconic soul funk anthem “Theme From Shaft” by the legendary Isaac Hayes from his headline set at Wattstax is available to stream and download here today.

Wattstax: The Complete Concert includes the full L.A. Memorial Coliseum concert and is available on both 6-CD and 10-LP formats. In addition to musical performances, it features all the speeches and other stage banter from the event, including event MC, the Rev. Jesse Jackson’s often referenced “I Am Somebody” speech. Both formats of this collection include the full-color book with introduction by Wattstax creator Al Bell, and essays by Rob Bowman and A. Scott Galloway that is also included in Soul’d Out: The Complete Wattstax Collection.

A 1-CD title, The Best of Wattstax, brings together a handpicked selection of twenty of the best musical performances from the Wattstax concert. Including performances by Isaac Hayes, The Staple Singers, The Bar-Kays, Kim Weston, Rufus Thomas, Carla Thomas, Albert King, Eddie Floyd and more, and serves as a great introduction to the event and the many iconic artists that it featured.

Newly cut from the original analog tapes, reissues of the two original soundtrack albums Wattstax: The Living Wordand The Living Word: Wattstax 2—which feature highlights from the concert and subsequent documentary film—will also each be reissued on 2-LP formats on the same date.

On August 11, 1965, a 22-year-old Black man named Marquette Fry was pulled over by white police officers on suspicion of driving while intoxicated in the Watts community of Los Angeles, igniting the protests that would come to be known as the Watts Rebellion. This breaking point was spurred by the destitution of Watts residents, who had grown weary after decades of discrimination, lack of jobs with decent wages, and other forms of economic oppression, political isolation, poor schools, unfair housing practices, and the type of racial superiority that had long denied them their right to live happy, fulfilled lives.

In the South, during the same time, Stax Records President Al Bell witnessed angry white mobs, the intervention efforts of President Dwight D. Eisenhower, white children jumping out of school windows to avoid contact with the Black children, and the throwing of burning toilet paper on to the Black children.

In 1971, Bell set up a Stax satellite office in Los Angeles and regularly monitored the living situation in Watts and the positive changes in the community, or, more accurately, the lack thereof. It seemed the residents of Watts had lost all hope, like a people on the verge of suicide. They had resigned to accept the loss of the battle for basic acknowledgement and a fair quality of life. Bell knew something had to be done to change this and was certain that healing could be delivered through the power of music. Bell says, “I believed then that soul music is an art form born of the African American culture, and that Stax should support the people who supported us. I also wanted to garner more recognition for our roster of Southern Soul artists by taking them to Hollywood for a performance that no one would ever forget.”

The 2-LP soundtrack of the concert’s highlights Wattstax: The Living Word was released several months after the benefit concert, selling more than 500,000 copies just weeks after its release. This was followed in 1973 by the Mel Stuart-directed concert film Wattstax, which features Richard Pryor as host and went on to be nominated for a Golden Globe® award for Best Documentary in 1974. In 2020, the film was selected for preservation in the United States National Film Registry by the Library of Congress as being “culturally, historically, or aesthetically significant.”