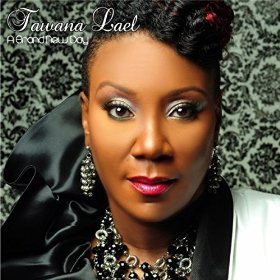 Click on CD cover
to listen or purchase
https://www.amazon.com/Brand-New-Day-Tawana-Lael/dp/B00NICR9BA/ref=as_sl_pc_tf_til?tag=soultracks-20&linkCode=w00&linkId=II42NABMKIMNSDFD&creativeASIN=B00NICR9BA

R&B artists get hot coals heaped upon their collective heads for the singular focus they place upon affairs of the heart. It sometimes seems that they continually sing songs about the romantic chronology that begins when the eyes meet from across the room until the relationship culminates in love, sex or the break-ups that are so very hard to do or the reuniting that feels sooo good. Bleek Gilliam, the trumpeter in the Spike Lee film “Mo’ Better Blues,” captures the jaded down with the love song sentiment with his musical declaration “What the world needs now, is…. Not another love song.”

Well vocalist Tawana Lael returns to the musical market with a project brimming with – wait for it – love songs. It would be more accurate to identify the tracks on her new CD A Brand New Day as relationship songs because the 11 tunes on this new project address the joys and trials of that most splendored things. It would also be correct to say that A Brand New Day is a pleasant departure from the type of clichéd and objectifying songwriting that critics say afflicts a lot of mainstream music.

To understand why love songs often elicit eye rolls, turn on the radio. Terrestrial radio will play a ballad by adult oriented acts such as Kem, but around it you will also be forced to wade through songs lifted from the fantasies of 17-year old boys.

Lael is among the vocalists who gears her lyrics toward the adults, while also employing contemporary R&B production. However, technology can’t detract from the virtues that Lael brings to this album. Chief among those virtues is her songwriting and storytelling, which have advanced greatly since her debut album, the solid Journey To Love.

“We Lose” is an example of Lael’s growth as a songwriter who addresses the realities of relationships from a mature perspective.  The song’s narrative addresses two people whose relationship has devolved into a contest to see who can win every argument. In this struggle it’s Lael who concedes: “You cry, I cry/Then we both give up/I can’t believe it’s this easy to say/Goodbye/I don’t want to let go/But it’s killing me to stay/I can’t seem to hold on/And all that’s left for me to say is/I give up./I give in/You win/But we lose.”

Lael creatively arranges the album so that the first half A Brand New Day contains cuts such as “We Lose” that address relationships that are in some state of crisis. The second half finds Lael singing about the joy of physical and emotional attraction and the reverie of finally finding that true love. “Crazy Love” combines a vocal arrangement that harkens back to the girl groups of the 1960s with an upbeat percussive instrumental arrangement that is a match for the track’s message about the way that the discovery of new love can alter the mind.

“What It Be Like” brings bass driven old soul feel to a track about another kind of revelation – the realization that despite the best intentions and efforts, a relationship is not progressing. “Sometimes it’s not right or wrong/It’s just what it is when your loving ain’t strong enough/When it’s gone it’s over/And this is what it be like,” Lael sings in the hook in a voice that is filled with recognition rather than rage or regret.

Lael need not offer any explanation or defense for the choice of her subject matter because she is part of a tradition deeply rooted in this nation’s musical heritage. Lyricists and vocalists from all genres have long addressed love and romance.And on A Brand New Day, TawanaLael’s contributions are the basics of good music: a talented vocalist presenting well-crafted songs that sport solid lyrics and stories and really resonate with authenticity. Recommended