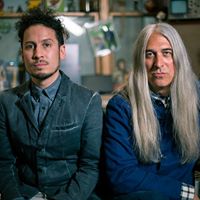 Thanks to Daft Punk’s Grammy-winning magnum opus, Random Access Memories, a ‘70s golden AM radio tribute, the inspiration others have had in pulling off retro-themed works has been on an upswing. [LMG1] Justin Timberlake did it twice and D’Angelo’s comeback record followed. Andy Platts is no stranger to the throwback soul regimen. As the frontman of the UK pop/soul band Mamas Gun, he helped fan the fresh fires of the Brit soul aesthetic started by the late Amy Winehouse and even wooed a great number of SoulTrackers to their rare underground grooves. He’s once again taking a page from that handbook, but is doing so by teaming up with Ping Pong Orchestra producer/multi-instrumentalist and former L.A. resident Shawn Lee. On West End Coast, the two – cleverly naming themselves “Young Gun Silver Fox” – carve out a ten-track collection that marinates the best of AOR with a smidgen of funk and pop, creating a set that celebrates the West Coast sound while playing with a little Electric Light Orchestra, a dash of America, some Doobie Brothers and a sprinkle of Steely Dan.

Immediately upon its first listen, West End Coast gratifies. With the album opener “You Can Feel It,” the dreamy Pacific Coast Highway cruise-controlled hustle and sunny close-knitted harmonies may immediately cause listeners to fall into a satisfying calm. The cut also bears some resemblance to America’s “You Can Do Magic.” On “Better,” the quest for grandiose soft rock hits a rapturous apex. It works like a groovy mid-‘70s Steely Dan single, dressed in tight harmonies and Elton John soul. Towards the back of the track, Plants raises his belting powers over the fuzzy psychedelic-spiced guitar, which creates one of the album’s eargasmic moments.

Then there’s “In My Pocket.” Endowed with Platts’ atmospheric falsetto, this synth-pickled track feels like a gorgeous, finger-snapping slice of Kenny Loggins and Michael McDonald. “If I can only take my baby wherever I go/Happy sky like a rainbow,” Platts sings with a transparent, happy-faced glow. It too stands at the top of the list as one of the album’s grandest highlights.

Much of the remainder of the disc spins with equally compelling moments. “So Bad” channels MJ’s Off the Wall funk. The opening bars of “Distance Between Us” are reminiscent of Player’s “Baby Come Back.” The joyful “Saturday” comes packaged with gospel-tinged emotions.

“Long Way Back,” possibly the only track that sounds like it doesn’t fit the AOR theme, is totally ripe with smooth ‘70s soul, but comes across sounding more like it has been traced from Isaac Hayes’ symphonic soul template than the West Coast alteration of Barry White. With moody romantics and Philly soul synergy, the power ballad closes the album using just enough drama to create something flowing in the guise of Lenny Williams’ “Cause I Love You” for the new century.

Not everything aboard West End Coast leaps instantly with sing-a-long gloriousness (“Spiral” goes in and out too much from what works), but what’s so cool about the disc is just how effective the magical time warp back to the California lovin’, ‘70s soul pop nuances really is, especially noting that the effort was pulled off at Lee’s Trans-Yank Studios in London. The songs are splendidly produced, ringing with impressionable melodies and meaningful lyrics. Those familiar with the powerful, near-perfect debut of State Cows will definitely relate to this disc. It compliments that very same sound and artistic vision. This is probably a one-off effort, a passion project for the combo, but for those lucky enough to bite into it, there is hope that they can force the pair to do a sequel. Highly recommended.