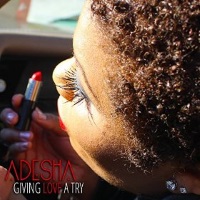 Click on CD cover
to listen or purchase
https://www.amazon.com/Giving-Love-Try-Adesha/dp/B00ND88QGG/ref=as_sl_pc_tf_til?tag=soultracks-20&linkCode=w00&linkId=VGLTVYODUXPSTC36&creativeASIN=B00ND88QGG

The duet “Make It” is a tune that serves as the best example of Adesha’s broader view of the life issues that people confront as they try to navigate their relationships.

The duet “Make It” is a tune that serves as the best example of Adesha’s broader view of the life issues that people confront as they try to navigate their relationships.

“Make It” is a neo-soul/funk cut that tells the story of a man and woman struggling to overcome the challenges faced by the 99% - namely how to pay the bills and still have a life. Plenty of men have been in the position of being frustrated that the money seems to be gone on the day that the check posts in the bank, and sometimes that frustration spills over. Plenty of woman find themselves in the position that Adesha so eloquently vocalizes in “Make It” of administering doses of perspective and tough love leavened with support and hope. The track stands as a standout on a project filled with quality tunes.

Adesha also covers love relationship ground that is familiar to all music fans, but she brings her own unique flair to these cuts. “Quit Playing” is a mid-tempo number that sports a percussive march instrumental arrangement that meshes well with the song’s narrative of a woman whose patience has been worn thin by her lover’s game playing.

“Love You Hate You” speaks to the conflicting emotions people face as they get deeper into a relationship. The genius of this track is the upbeat instrumental arrangement that belies the confusion and frustration found in Adesha’s voice and the lyrics. That frustration reaches the boiling point on the next track, “Pick Up,” a hard rocking number that finds the singer growing more frustrated with her lover’s refusal to answer her calls after the two have an argument.

The ballad “Love Lifted” sports lyrics that work equally well for as a statement of the elevating power of divine love, the motivating power of an inspirational mentor or the transformational power of that one true one – a soul mate.

Adehsa is an artist who confirms what is so fascinating and maddening about this indie soul movement. She seems to come from nowhere. I did a google search and learned that she’s from the Bay Area, but I don’t know her back story. Maybe her biography reads like so many other talented R&B singers – started in the church, sang in neighborhood groups and maybe she did musical theater. The point is that I don’t know. What I do know is Giving Love a Try reveals Adesha as a mature and fully formed artist, and music fans will be rewarded if they give this album a try. Strongly Recommended.