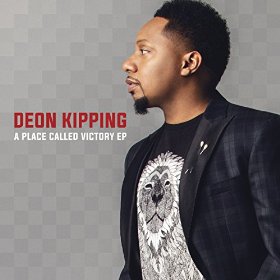 Click on CD cover
to listen or purchase
http://www.amazon.com/gp/product/B019D9JUVS/ref=as_li_qf_sp_asin_il_tl?ie=UTF8&camp=1789&creative=9325&creativeASIN=B019D9JUVS&linkCode=as2&tag=soultracks-20&linkId=X5PIOGTTANLXGMMH

To possess all the necessary tools to become a universally respected music minister is an achievement in the ever-competitive gospel industry. To win the respect of peers and fans requires years of sincere motivation, backed by massive determination by the artist devoted to shape their craft and cultivate a creative consistency in guiding others into sincere worship. With his latest four-song EP, A Place Called Victory, Deon Kipping is once again proving himself as a strong force in contemporary gospel.

Deon Kipping has been earning credibility among the faithful at a steady clip. Besides his experience as a vocalist and choir director, Kipping learned the ropes of producing music through his long-time mentor, Gerald Isaac, a respected music minister in his own right. After plenty of trial and error in refining his songwriting, the Connecticut native progressed into a successful contemporary gospel songwriter for Bishop Paul Morton, Jessica Reed, Marvin Sapp, and many others. His soulful, solid tenor also sang the lead with J.J. Hairston & Youthful Praise on his composition, “Incredible, God Incredible Praise.”

Putting credentials aside, Kipping really takes his connection with God seriously, encouraging believers to overcome the world’s troubles on the cut “I Don’t Look Like (What I’ve Been Thru).” This personal song was inspired from a track off his independently released Real Life, Real Worship as Deon Kipping and New Covenant, the same project that spawned a Billboard Top #2 Gospel hit for Sapp, “Praise Him in Advance.” Whether leading New Covenant or stepping out on a solo platform with his Verity Gospel debut, I Just Want to Hear You, Kipping is consistently carving out his own ministerial voice. A Place Called Victory keeps him on course for uplifting believers, supported by his diverse musicality on all four tracks.

The percussive, “The Blessing is Yours,” is frosted with acoustic guitar and Kipping’s urgency on beating bleak circumstances: “Opportunity knocks, but you won’t answer/Doubt has been eating away at your faith just like a cancer.” There’s a rock edge driven with guitars and brass throughout “I Want It All” that declares victory and prosperity. But, the choice moments on A Place Called Victory resonates on the two appropriately chosen singles best representing Kipping’s passion and reverence of God’s power. The title track is jam-packed with catchy grooves and a resonating message of enduring the pain until one reaches a victorious state: “I will stand…I will live in victory/I belong here…My life depends on it.” Just as effective is the touching “By Myself,” which blossoms into a wonderful interaction between Kipping and the backing voices as their plea for God’s strength remains on point, never straying into unnecessary vocal hysterics.

Kipping’s years of investment in delivering inspirational gospel is why his talents are so in-demand. Now the wait is on for an upcoming full-length project later this year. In the meantime, this enjoyable gift from Kipping in A Place Called Victory should be enough to tide us over. Recommended.