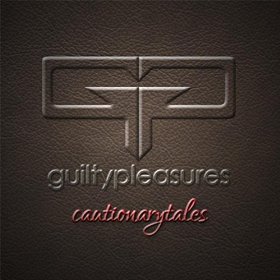 Click on CD cover
to listen or purchase
http://www.amazon.com/gp/product/B014YMJAIW/ref=as_li_qf_sp_asin_il_tl?ie=UTF8&camp=1789&creative=9325&creativeASIN=B014YMJAIW&linkCode=as2&tag=soultracks-20&linkId=A5LIZXKJTXGDFM7B

The band guiltypleasures takes the less is more approach to album making. Their 2009 project - the very good Lovestories - had 10 tracks, while the recently released Cautionarytales weighs in with at eight songs. That’s a track count that would be right at home in the vinyl era, and in keeping with their ethos of doing the most with the least, Cautionarytales may be even better than its predecessor.

The band guiltypleasures takes the less is more approach to album making. Their 2009 project - the very good Lovestories - had 10 tracks, while the recently released Cautionarytales weighs in with at eight songs. That’s a track count that would be right at home in the vinyl era, and in keeping with their ethos of doing the most with the least, Cautionarytales may be even better than its predecessor.

Band leader Rick White employs a method used by producers such as Incognito’s Jean-Paul 'Bluey' Maunick, rotating in a different roster of vocalists to ensure that the band’s sound and songwriting remain fresh. Jerrica White is the lone holdover lead vocalist from Lovestories and she lends her voice to the record’s final track, “Cautionary Love Affair.” That tune is representative of the overall quality of the music found on Cautionarytales. The cut’s distinct sound is distinguished by melody driven by an acoustic guitar paired with an electric bass that gives the number a folk/funk convergence. The lyrics sport a narrative about two people who, despite all the conflict and drama, just can’t seem to quit each other. “It’s not for the faint of heart/The way we always stop and start/The things that would tear most apart/They bring you closer to my heart.”

Vocalist Kia Bennett adopts an intimate style as she seeks to reconcile with a disaffected lover on the neo-soul infused track, “A Song With You In It.” The song features Rick White laying down a funky bass line and deploying the keyboard to give it an old school electric organ feel. Meanwhile, Bennett uses every vocal arrow in a quiver to get her man to change his mind – taking her voice from conversational to sultry.

The band honors its DC roots and the spirt of Chuck Brown on the slamming go go number “Unhappy,” fronted by vocalist Blez. She is perfectly at home lending her gospel-tinged vocals to a record brimming with church organs, deep bass and pulsating percussion.

If the vocal star of Lovestories was Mycah Chevalier, Cautionarytales’ superhero is the aptly named Kal-El Gross. Gross doesn’t simply tell stories as he embodies the character described in narrative of each track.  On “Opportunities” Gross can’t seem to avoid situations that find him finding love in the wrong places. The ballad “Changes” finds Gross looking back at a recently ended relationship and dealing with his conflicted emotions as he tries to deal with his new normal -- even as he confronts the fact that he’s not ready to move on. “I tried my best to move on/But it’s easier said than done.”

The sparse, jazz infused number “The Train” finds the attached but marginally committed Gross holding on to a chance encounter that he has with a lady he meets on the Metro. He’s interested enough to allow the thought of the woman to linger during the work day while also hoping that he will see her again, but not quite ready to cut his current significant other loose. “We pass each other on the Metro train/And I’d give anything to know your name/But I don’t wanna start something I can’t finish/I’m seeing someone though her heart just isn’t in it.”

Listening to Cautionarytales has the feel of being engaged in a conversation during a short trip. The talk is engrossing and you aren’t ready for the talk to end even when you arrive at your destination. Well, nobody will be angry if choose to go around the block a time or two more with guiltypleasures’ latest.  It is a trip worth repeating over and over. Highly Recommended.