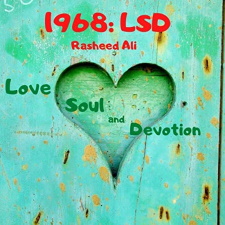 As with the second, third and fourth installments released in this series, the album’s title are not rooted to the year. From my standpoint, that year represents a coming of age in Ali’s life. The events that happened in that year served as the foundation on how Ali viewed politics, race, economics and love, and that worldview comes through in some of the tracks found on all the albums. For example, 1968: The Other Side of Town included songs such as “A Badge and a Gun,” that are equally influenced by what was happening in 1968 as what is going on right now.

In that sense, 1968: LSD stands at the album that is least connected to the 1968 concept. That might be the best proof that the concept has run its course and Ali is wise to move away from it. But that also means that 1968: LSD is the album that can be judged on its own artistic terms.

And that is also not to say that 1968: LSD does not share some elements with the previous projects. For example, the arrangements all possess a heavy dose of bass driven funk and brass. So the James Brown influence remains.

Still, this is the most intensely personal of the five records. It focuses on Ali’s travels through life and the people, mainly the women, that he encountered. Some, like “Trouble” and “Don’t Make Me Sing the Blues,” tell humorous stories of Ali resisting, with varying levels of success, of women trying to lure him into directions he does not want to go.

Ali paints a portrait of a summertime love affair that has receded into a sweet memory on the ballad “I Don’t Have Any Pictures,” which is one of the album’s standout numbers. The haunting mid-tempo funk of “You’re Always on My Mind” serves as a good follow up to “I Don’t Have Any Pictures.” On this track, Ali reminds us that physical absence doesn’t necessarily prevent someone from having an emotional presence.

Ali has dedicated the last half decade to coming to terms with the ways that the year 1968 has impacted his life. Now, he seems ready to move on. If so, 1968: LSD is a good bridge to connect that past to whatever the future holds for this talented and ambitious artist. Recommended.